This summer, Airstream has partnered with Explore Scientific on a series of articles about stargazing, astronomy, and how to use your Airstream as a vehicle to the stars. This month, Explore Scientific’s founder and president Scott Roberts takes us on a cross-country trip to some of the best “star parties,” where dark skies reveal some of the most beautiful objects you can see in the sky. 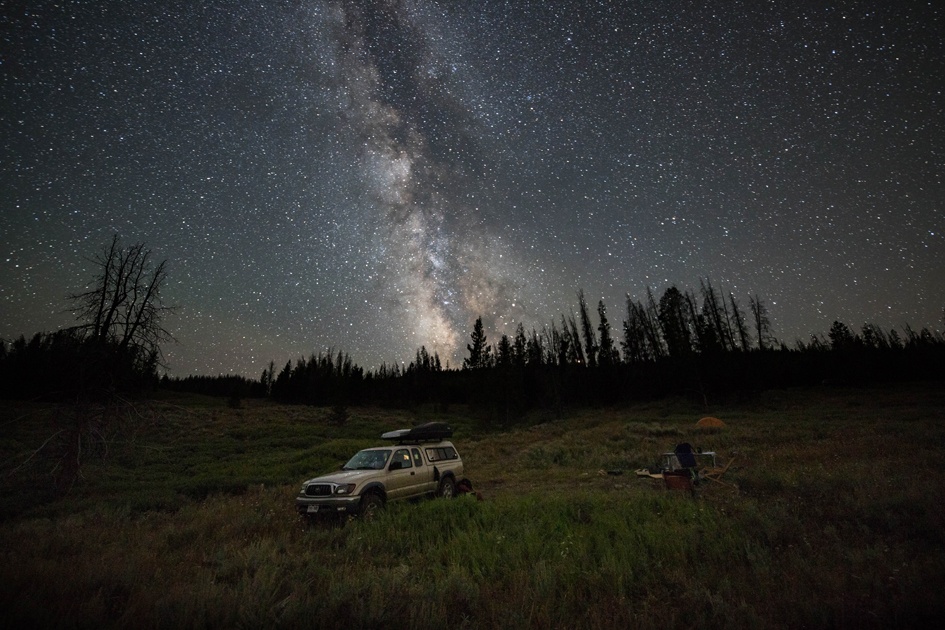 Each time I load up my Airstream — the Barbara Jean — with observing equipment and set out on a stargazing journey, I anticipate not only what the night sky might have in store but also the opportunities that are waiting to awaken others to the marvels of the universe.

I’ve found that one of the best places to experience the inspiring sights and priceless camaraderie that amateur astronomy has to offer is a star party. Across the country, these events bring together astronomers of all levels to celebrate the night sky in locations that are ideal for stargazing. A recent visit to the Nebraska Star Party — which is held in a remote spot where the sky is so dark the Milky Way shines bright enough to cast shadows — reminded me once again how well star-chasing and Airstream traveling coalesce to feed my passion for exploration.

The next trip on my agenda is an annual fall favorite — the Okie-Tex Star Party at Camp Billy Joe, held in the remote and incredibly dark region the Oklahoma Panhandle— but there are many opportunities across the U.S.A. and around the world to attend an official astronomy event. To find out where things are happening, I encourage you to check out the Jet Propulsion Laboratory’s Night Sky Network calendar, visit the websites of astronomy publications like Sky & Telescope, or check with astronomy clubs in your region. Astronomy Day is coming up on Oct. 13, which means there will be lots of viewing events hosted by local astronomical societies, larger observatories and other organizations.

Even though going to the dark skies promised by most star party gatherings can yield a big payoff, doing your own personal exploration of the night sky can be equally as rewarding. Whether you are on a road trip or in your backyard, there are countless inspiring celestial wonders you can observe on your own.

But it pays to be prepared when going to a star party and to use star party etiquette. One of the golden rules is no white light. It takes astronomers 30-40 minutes for their eyes to adapt to the dark, and in doing so allows them to see faint galaxies and the glow of the Milky Way. Use a deep red flashlight to protect your own night vision, as well as that of others around you. When driving to an astronomy site, do so well before the sun sets and ask where you can park if you plan to leave before the sun rises. If you are staying and setting up your telescope, make yourself comfortable and bring a reclining chair (we recommend one from Nemo Equipment), maybe some hot beverage. A portable table can hold your eyepieces and star maps. A little soothing music can add to the mood, but keep the volume down so your neighboring astronomers are not bothered. Many astronomers share views through their telescope, but always ask before looking through someone else’s telescope.

A great object to start with is the Moon. Although it is the brightest object in the night sky and a steady presence in all of our lives, most people never take the time to really look at the Moon. From its winding rilles to its huge jagged impact craters, the stark lunar surface has many amazing features that become truly stunning when viewed through a telescope. While nearly any well-made telescope will show razor-sharp views of the Moon, the level of detail you can see will vary based on aperture. With a small refracting telescope, you can observe hundreds of craters and mountain ridges in high contrast. But if you want to see more, a Dobsonian reflecting telescope such as an 8” has enough aperture to show tens of thousands of landmarks including many of the most challenging features coveted by lunar enthusiasts. For a grab-and-go option, we recommend 8 to 10 power binoculars with at least 42mm of aperture (e.g. 8x42 or 10x50). Each offers a nice aperture that will soak in the Moon’s brilliant light. Although one might think the best time to view the Moon is when it is full, you will actually have a better observing experience during a quarter phase because features will not be overpowered by the intense brightness of a Full Moon. For an in-depth guide to major lunar features, I encourage you to check out the recurring Meet the Moon feature in each issue of Sky’s Up magazine, a free digital publication that you can download on the Apple App Store or from Google Play.

Popular planetary targets usually consist of Saturn with its intriguing rings, or Jupiter with its dynamic cloud belts. Currently, one of the most exciting planetary sights is our neighbor — Mars. At the end of July, the Red Planet made its closest approach to Earth since 2003. This means for the next few months it will outshine Jupiter, which is usually the third brightest object in the evening sky. To the unaided eye, Mars is a brilliant orange-red point of light right now. To see details — like its polar ice caps — you will need a telescope. Explore One’s Aurora 114mm reflector is a good low-cost option because of its generous aperture, and its viewing options expand immeasurably when you take your observations into deep sky territory where nebulae, star clusters and galaxies reign.

One beloved subject is the Orion Nebula — a stunning stellar nursery lit by the glow of newborn stars nestled in its wispy embrace. This nebula is easy to find due to its prime location in the sword branching off of Orion’s Belt and it is loaded with awe-inspiring bright and dark nebulosity. But to really explore this celestial treasure, you need a dark moonless night and a telescope of 4” or more of aperture and a low-power eyepiece to close the more than 1,500-light year gap between this magnificent showpiece and ourselves. A low-power telescope like an 8” or 10” Dobsonian under clear dark skies will blow your mind with the flowing ridgelines and notable voids in the Orion Nebula’s billowing veil of gas and dust. It also will provide revealing looks at popular features like the tightknit open star cluster known as the Trapezium. Although it appears as one brilliant mass to the unaided eye, this close community of stars has several distinguishable members that will pop to life in the telescope. Another popular deep sky choice for beginners is the Pleiades Star Cluster.

Found in the constellation Taurus, this open star cluster consists of more than 1,000 confirmed stars, although an average of only six are visible to the naked eye. A dark sky free of light pollution can help a dedicated observer see around a dozen Pleiades stars, but a good pair of binoculars or a refractor’s rich, high-contrast views such as what the Explore Scientific ED102 Air-Spaced Triplet will deliver, can quickly reveal the more elusive members of this legendary cluster.

The latter part of 2018 is also packed with plenty of meteor shower peaks that can be enjoyed by simply finding a dark patch of sky, sitting back and looking up. The shows these showers put on depends on several factors including how bright the Moon is during prime activity. Explore Scientific’s recently released 2018-19 wall calendar provides a month-to-month look at these peaks and other upcoming astronomical events.

The objects listed here are jumping off points for embarking on a journey through the cosmos. As Carl Sagan said, “The Earth is a very small stage in a vast cosmic arena.” Each clear night, the truth of that statement can be proven at the eyepiece as the sky serves up a buffet of beautiful celestial treats once the Sun goes down.

Scott Roberts is the founder and president of Explore Scientific in Springdale, Ark. He is an avid amateur astronomer who has spent more than 30 years in the astronomy optics industry.

Patrick Cullis is a Boulder, Colorado-based photographer specializing in astro-photography. More of his work can be seen at his website Patrick Cullis Photography, or on his Instagram.

Living the ‘Stream with Sully

Anticipating and Planning for the New Era of Travel

Airstream + Tommy Bahama®: A Match Made in the Sand