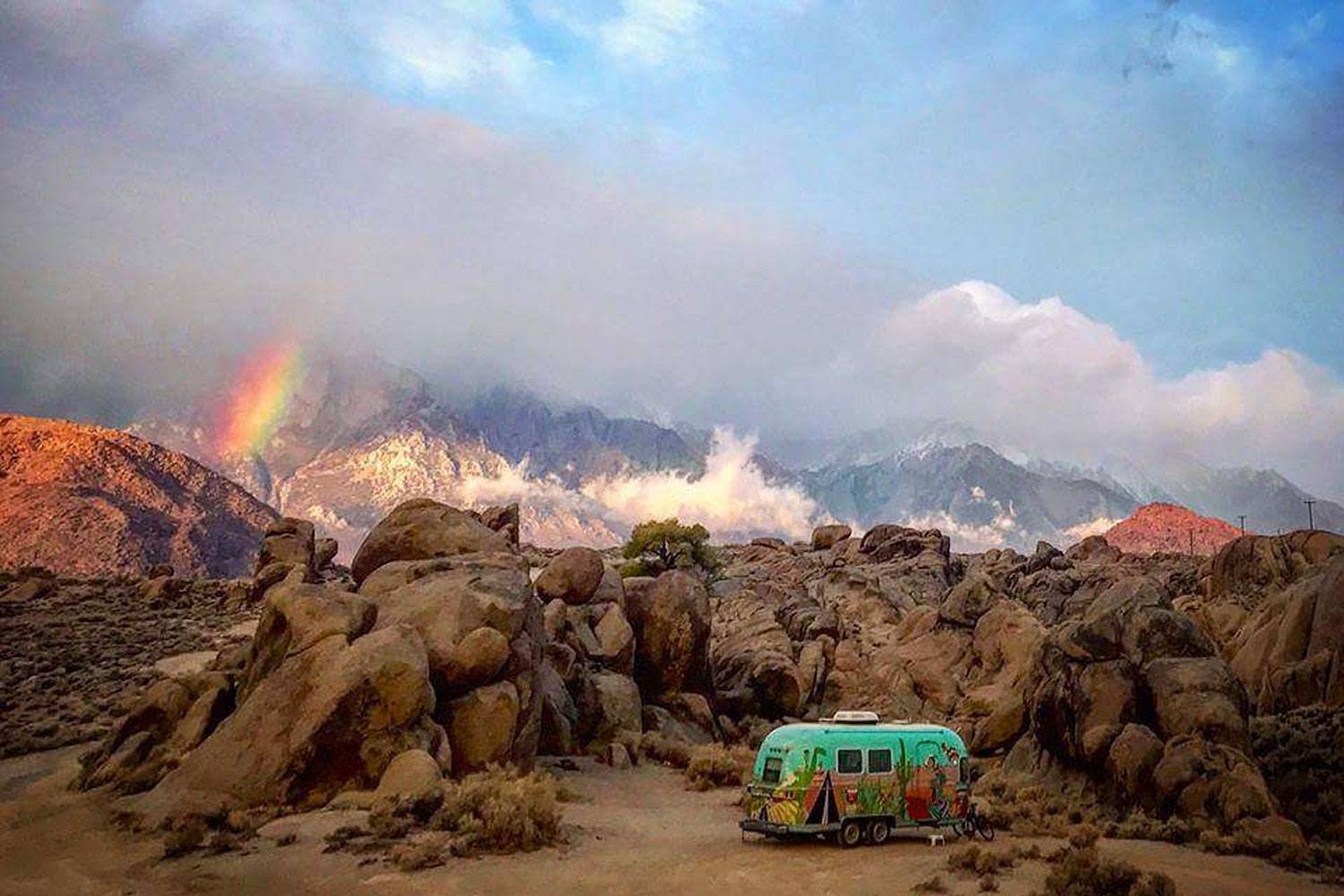 Note: This is Part 2 of a series on the Argosy line of travel trailers Airstream produced in the 70s and 80s. Part 1 is a history of these curious, painted Airstream cousins. Today, the Argosy owner community is strong, full of talented and creative people who often use the painted surface of their Argosy as a blank slate.

It’s hard to put a dramatic twist on an American icon. The familiar Airstream shape is instantly recognizable, and the silver aluminum shell magnetically draws eyes up and down the highway.

One look at Cate and Chad Battles’ 1976 Airstream Argosy, though, and it’s hard to deny the couple has found an impressive way to put their own spin on the classic design. Chad did most of the interior renovation, rebuilding it from the floor up and installing an old freighter’s porthole in the door. Meanwhile, Cate brainstormed a dramatic mural wrapping around their Argosy from tip to tail. “It was one awesome blank canvas for an artist such as myself,” says Cate, who regularly sets up an easel and canvas to capture the landscape during stops on their ongoing road trip.

Because their Argosy was already primed, all Cate needed to do was lightly sand the trailer’s exterior and clean it. Then she mapped out her design, drawing inspiration from the lyrics to Woody Guthrie’s classic folk song, “This Land is Your Land.” From the majestic redwoods on one side to the diamond deserts on the other, Cate’s mural is the perfect synergy of creativity and an Airstreamer’s spirit of the road.

After selling their home and the bar they owned in Asheville, North Carolina, the Battles headed out on a search for a new permanent home, eventually logging over 30,000 miles around North America. They currently blog about their adventures, and their Instagram account documents everything from life on the road to perfect spots to stop along the way. Their dog Maggie, as well as a goat named Frankie Rae, make frequent appearances in their updates. “They ride in the back seat together,” says Cate of her furry friends.

While the Battles have now settled down in Southern Oregon, they don’t have any plans to end their odyssey. Their generous spirits and their one-of-a-kind trailer helped them make a lot of friends in the Airstream community. “I don’t think I’ve ever seen travel trailers with as loyal of fans as Airstream,” says Cate, adding that Airstream and Argosy owners get along like family. “Everyone has always been very welcoming to us and we try and do the same back,” she says. “We are proud of our cool Airstream badge, though. We like being a little different…or a lot different! That’s just how we roll.”