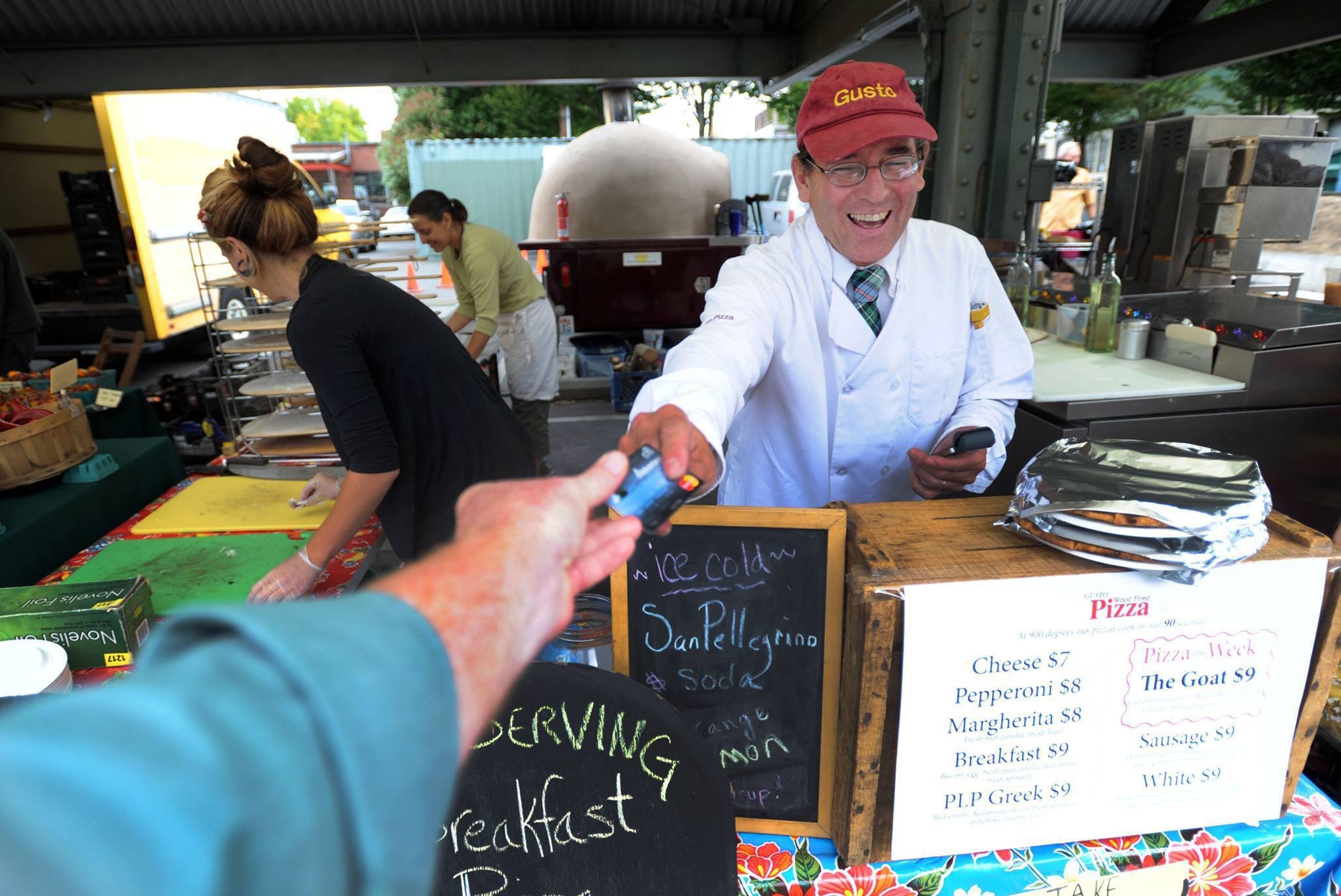 There are these caprese salad skewers pictured on Russ Kendall’s business website. Vibrant cherry tomatoes in yellow or red, white mozzarella balls speckled with fresh herbs, and bright green basil leaves in between those layers. Lush ingredients begging to be tasted and savored.

That, right there, cuts to the heart of why Gusto Wood Fired Pizza in Bellingham, Wash., is also known as Kendall’s Plan B. Photography has been the lifeblood of his career. He used to be a photo journalist, working for newspapers, authoring eight photo books for kids along the way. Now he runs a pizza business and manages a private Facebook page called “What’s Your Plan B?” to give journalists and former journalists a place to tell stories and help each other.

“Hearing people’s stories is very meaningful for me,” Kendall says.

On the day we speak, he is out flying a remote-controlled airplane with his wife and 11-year-old son. He talks to me while the plane is recharging, happy to discuss Plans A and B in his life and how they intersect.

The latter is a huge factor in why his portable pizza business has doubled every year and why he sometimes has to turn away events. Operating from what his website calls “an old-fashioned oven made from refractory mortar and firebrick, mounted on a custom-built trailer,” Kendall and his staff have a loyal customer base at the Bellingham Farmers’ Market and they cater all sorts of events.

“There’s a huge crossover [between photography and a pizza business],” Kendall says. “As a photographer, my people skills are far more important than my photography skills. If I’m a jerk, no one’s going to let me in. I worked on creating relationships. [As a photo journalist] I showed up at their worst moments. One assignment I had was with a woman who had just lost her son. I told her I was sorry. Then, ‘Can I come in and make some pictures?’ It required that kind of humanity.

“Now I make pizza. But the food is the vehicle to get to know these people. My wife is an amazing person. She works at a local hospice house. We remember [our customers’] names, what they order, that their daughter just graduated. When people write and say they might want to hire us because their daughter’s getting married, we invite them to the farmer’s market. We sit them down, offer them pizza and have honest, heartfelt conversation with them. I’ve always thought that food was love.”

Kendall’s palpable joy when he talks about his family and building community relationships is all the more heartening in context with his background as a ward of the state (in Rhode Island).

“Growing up, there were lots of predators and bullies,” he says. “I used to hide in the library. It was my refuge. I learned to love books. My favorite were the full-color atlases. I liked pretending I was a bird. I wanted to run away and live in Alaska with the Eskimos.”

In fact, when he was in his 20s, he wrote a book proposal to Scholastic to that effect and wound up living with Eskimos for a year and creating a kids’ photo book about it. He did another book after spending a couple of months in Russia, a trip he calls “spiritually satisfying” because his grandfather was a Russian Jew.

He began to realize how gratifying it was to help teach children around the world through his books, which sold over 3 million copies.

“They reached lots of children,” Kendall says. “They became textbooks in some places.”

This from the guy who flunked his first photography class in high school. While he was “transfixed” by capturing moments on film and enjoyed the alchemy of it, he wasn’t very good at following rules.

“I’m a color-outside-the-lines kind of guy,” he says.

Still, he began to realize he could tell stories with his pictures and he followed that vision in his travels. At his 20th high school reunion, he presented his photo teacher with a copy of his books. In the meantime, he’d become a photo journalist. His career took him to jobs at newspapers in Alaska, Colorado, Maine and Washington. He left his photo editing job at the Bellingham (Wash.) Herald in 2012 after eight pay cuts and massive layoffs.

“I felt the joy for the business for so long,” Kendall says. “It was replaced by sadness, fear and frustration. Satisfaction was replaced with a feeling of dread. I was regularly embarrassed for what passed as journalism. I still subscribe to the last paper I worked for. Now it’s filler, rewritten press releases and photos supplied by businesses. Or things like, ‘Where’s the cast of Happy Days now?’ They’re selling the media equivalent of junk food.”

That’s almost blasphemy coming from a guy who’s selling pizza made with locally milled organic flour and locally grown toppings, one who calls cooking his passion. While he got his own Plan B going a full year before leaving his photo editing job, he knows others’ alternate paths weren’t as clear. That’s what prompted him to create “What’s Your Plan B?” on Facebook; it’s an invitation-only place to share for people in journalism who have been laid off or are afraid they’re going to be. He sees it as a way to be re-humanized after being de-humanized.

“There’s a lot of survivors’ guilt, depression, loss of income,” Kendall says. “There’s wonderful give and take on the page.”

And then there’s his own rousing pizza story. From cooking for friends and family to earning a living at it.

“We find ourselves in tracks,” Kendall says. “It’s hard to leave this groove. Well, sometimes getting kicked out of this groove is the best thing that could have happened.”

It leaves room for a delectable caprese salad skewer and a whole lot of human connection.