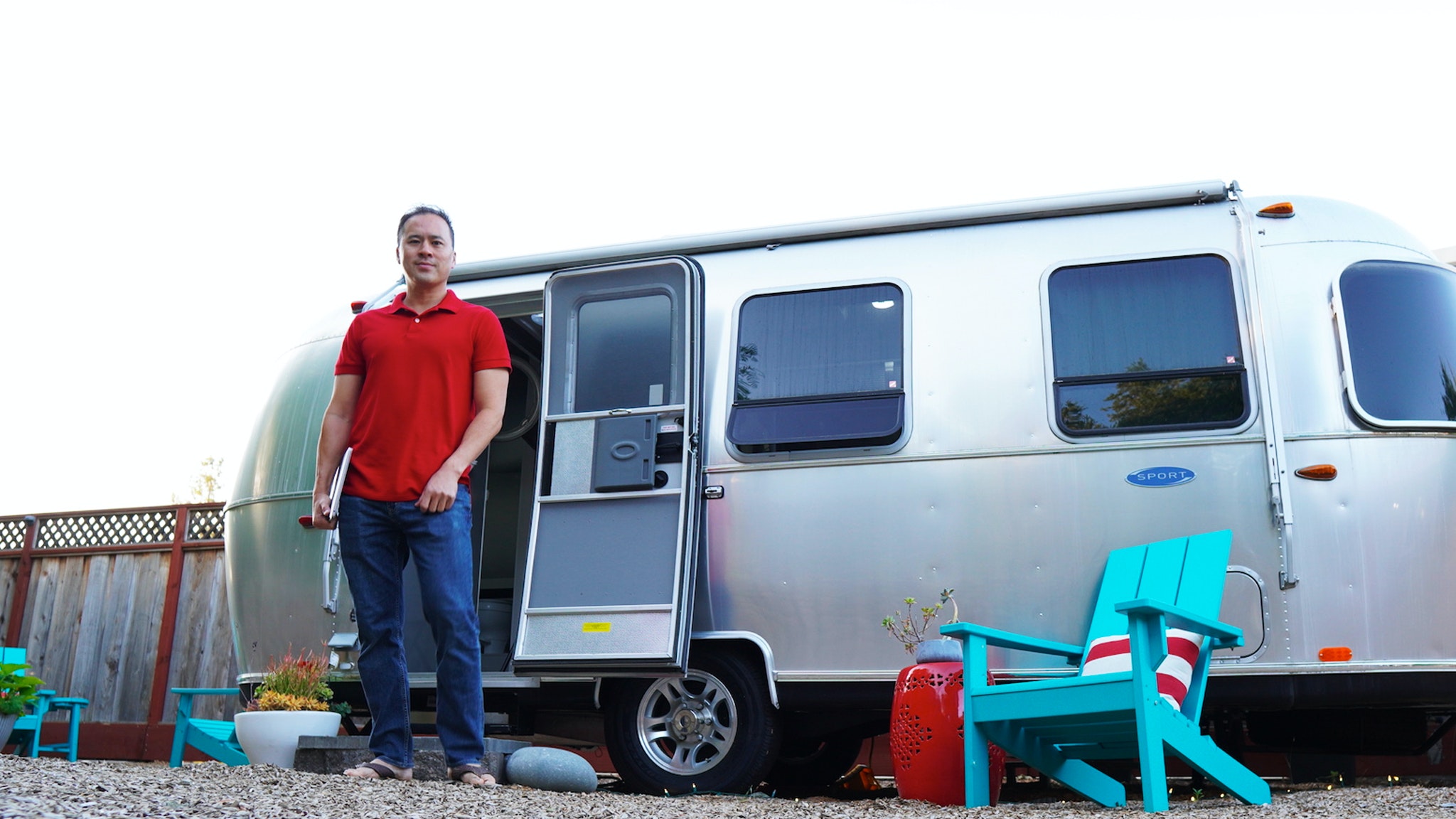 The Coolest "Tiny" Home Office Ever

Here’s a brainteaser for our current moment.

I own an Airstream but not a tow vehicle.

I don’t camp, but spend most of my days in a 22-foot Sport connecting with people around the world.

Answer: Jeremiah Owyang, a Silicon Valley tech consultant who uses his Sport as a backyard office.

“My story is different from those who buy an Airstream from a passion to be in the outdoors,” says Jeremiah. “I came to this with a business mindset. But I do think my experience reflects the issues many people are facing as they realize they may need to work from home for the next few years, if not forever.”

“Part of the entrepreneurial dream of Silicon Valley and America is to run your own business,” says Jeremiah. “Once I had enough experience in my career, I was able to venture off and start my own company. It’s freeing to set one's own schedule and decide how you work and who you work with. Those are some of the benefits of being your own boss and being an entrepreneur, which is a big part of my ethos.”

Jeremiah launched his tech consultancy from home and continued to work there for almost a decade. But a growing family began to crowd his growing business, which involves lots of conference calls and deep analysis.

“I need a quiet place to work - to hear, think and conduct my research and writing,” says Jeremiah. “I can't have a lot of noise, whether that be dogs, cats, kids or people moving around.”

Jeremiah first considered taking a spot in a shared workspace, such as WeWork. But the $2,000 a month rent made that a non-starter. Next, he considered building a “tiny office” in his backyard, a costly project wrapped in regulatory red tape. So, Jeremiah, who has a professional reputation for diligent research and smart solutions, continued to work the extra space Rubik’s cube until he came up with a bright, shiny solution: A 22-foot Airstream Sport set 29 steps from his backdoor.

“The Airstream is everything I need,” says Jeremiah. “It’s a quiet, clean, safe place to work that looks and is modern. I step into another realm in the Airstream. I lock myself up in this wonderful environment. It gives me the ability to separate and focus on work, rather than getting distractions from, ‘Should I be making dinner?’ or ‘Did I get the groceries?’ or ‘I need to sweep the floor.’”

And, you can’t beat this price for premium office space. Jeremiah’s monthly payment is a tax-deductible $370 a month on a twenty-year loan. What’s more, notes the savvy businessman, the Sport “is an asset that’s currently appreciating in value.”

Speeches and presentations are a big part of Jeremiah’s job. Pre-pandemic, he flew to several conferences per year. Now, when it's time to share his insights, Jeremiah saunters out the backdoor to what he calls his “Tiny Airstream Studio” and wows a crowd on the other side of the country or world via live video feed. At the center of his tech array is a Comcast XFINITY one gigabyte line that runs from the house and Orbi 5G routers.

“I get some extreme speed,” he says. “Five hundred megabytes per second download is pretty average, even through the aluminum skin of the Airstream.”

In addition to housing his business, Jeremiah says, the Sport serves as a marketing tool by conveying a captivating image.

“Often, when I’m on video calls, people ask, Where are you?  They ask if I'm in an airplane or a hyperbaric chamber. I say, ‘No, no, no!  I'm in an Airstream,’ and their eyes light up. People have told me the Airstream made them want to work with me because they think it's relevant. The brand conveys adventure and innovation.”

Jeremiah expects to run his business from the Airstream for at least the foreseeable future. While he could accommodate two employees in the Sport, he says if he adds staff, they will most likely work remotely from locations of their choosing while he runs the show from the Airstream. This, Jeremiah says, is the future of work.

“In some of the research that I do, I have found that while many big companies expect some employees to come back into the office, it won't be five days a week. The work-from-home office is the future in America and beyond. This is going to be a common way people work, even for people who have dedicated space.”