The first time we laid eyes on the vintage Tucker Sno-Cat, grandiose ideas flew around the room­. A snowcat is capable of going anywhere you can take a snowmobile so the options for back-country adventures are almost limitless. The Tucker is owned by our friends, also owners of Colorado based Weston Snowboards, and they were just as excited as we were to try something crazy. 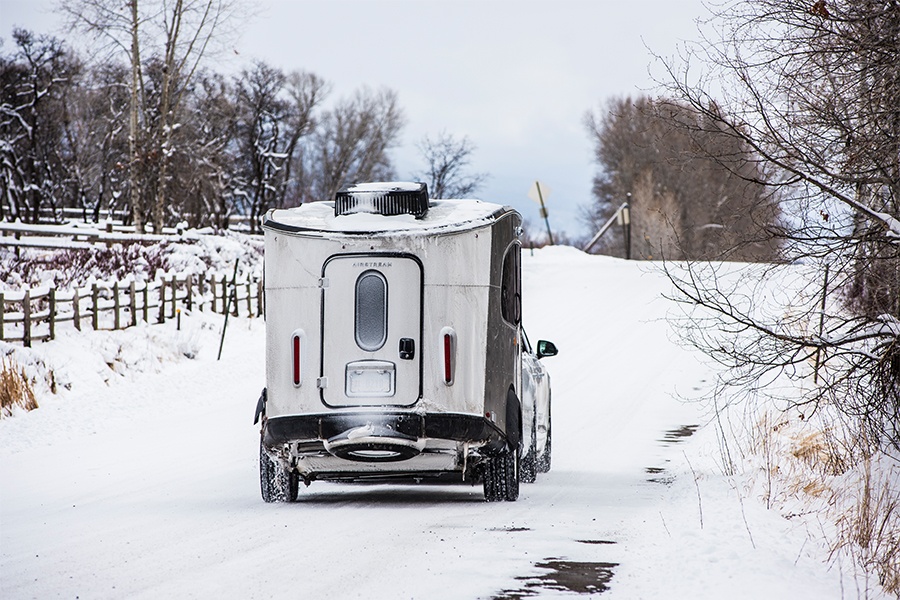 We have spent the last six months towing the Airstream Basecamp around with a mix of mid-sized SUV’s and knew just how light and agile it was. We knew we wanted to use the Basecamp to access snowboarding but the plan was still forming. At first we talked about staging the Basecamp at the bottom of the mountain and using the snowcat from there to access the higher mountain terrain. It didn’t take long for that conversation to elevate (no pun intended) to towing the Basecamp into the backcountry with the Tucker.

Weston provided us with a couple of the largest and stiffest snowboards Weston produces that did not pass their rigorous quality testing (didn’t want to wreck perfectly good boards). We began the process of retrofitting them to carry a travel trailer instead of a human. We cut lengthwise slots in the boards and heavy gauge angle iron bolted in. This gave us a metal fin protruding through the base to help keep the trailer in line behind the snowcat. The angle iron also gave us a nice platform for the tires to sit on and a place for tire webbing harnesses to be bolted to. 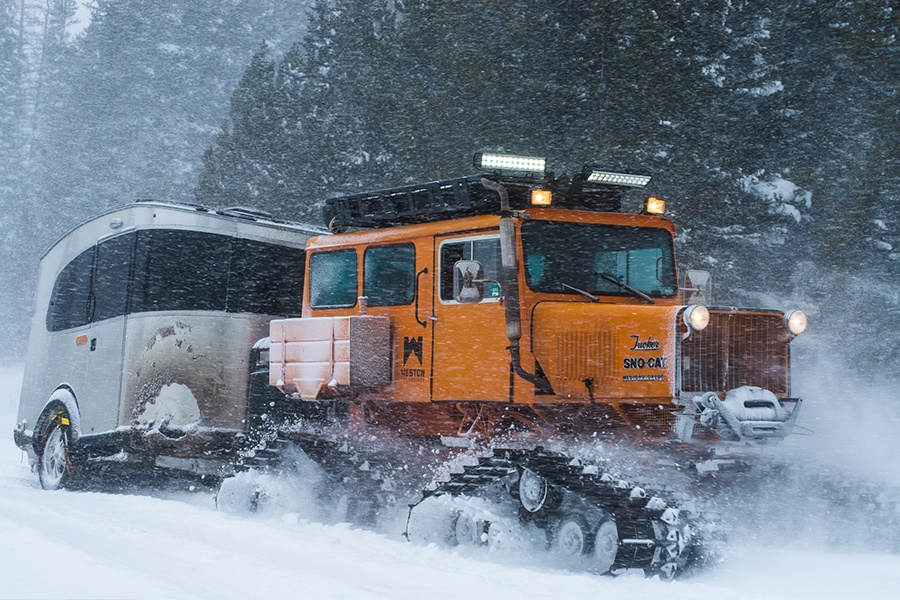 Mother nature not only cooperated, but gave us a blizzard on the inaugural voyage. The Basecamp easily backed onto the snowboards and we strapped it down. We all wondered how the 1979 Tucker Sno-cat would do towing an Airstream travel trailer through two plus feet of fresh snow into the Colorado mountains. The moment of truth came and the Airstream floated effortlessly behind the iconic orange snow machine. Huge cheers went out from the crowd as it pulled away without hesitation.

The combination of the Airstream and the orange Tucker chugging along through the blowing snow was beautiful. Tucker snowcats are an iconic piece of engineering and often meticulously cared for and restored by aficionados similar to the way Airstreams are loved and cared for. The sound of the cat’s four tracks could be heard before it could be seen in the blowing storm. Then the lights would start to show, then the orange, and then the shiny aluminum of the Basecamp. 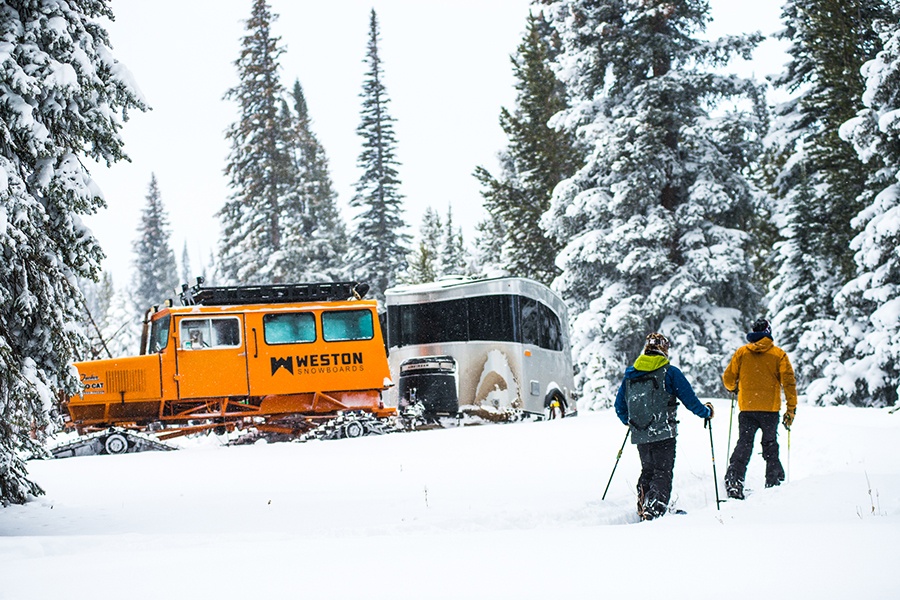 Our small gathering grew as Weston Snowboards professional team riders started showing up to join in on the fun. Some folks headed out on split boards, which are snowboards that convert into skis for uphill climbing. This was the first huge snow to a season that started out slow and everyone could not have been more excited.

Dead trees were gathered and a bonfire was lit. While some folks warmed by the fire others indulged in the warmth and comfort of the Basecamp. We had the heat on and there was hot cider and green chili on the stove; comforts not usually experienced in the backcountry. It was truly amazing to be sitting on a nice seat, out of the snow, in the warmth, eating good food with music cranking, while a couple feet away is a raging blizzard and temperatures not even in the teens. 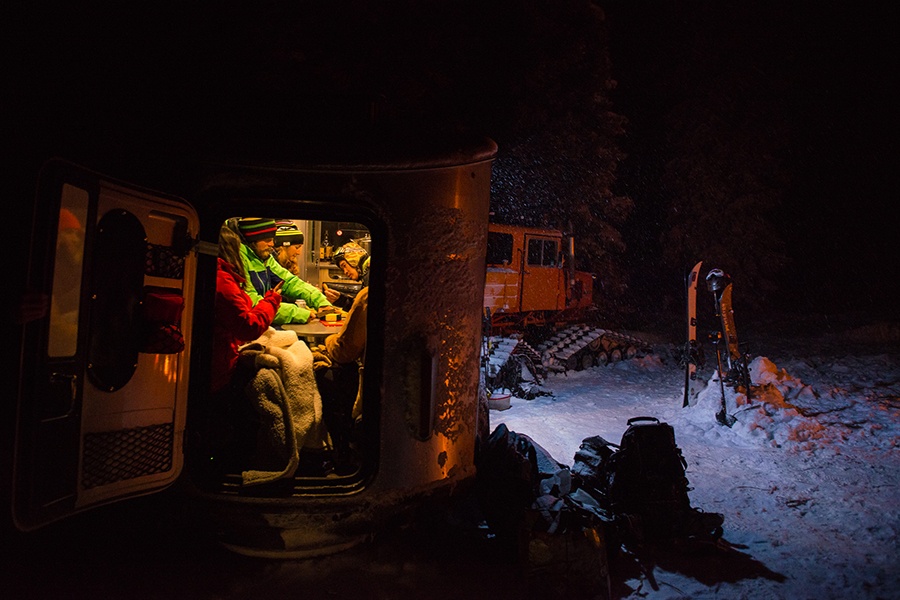 At one point we had 13 people in the Basecamp. The tiny space was filled with huge smiles and laughter about how amazing the whole adventure panned out. We were miles from the closest road hanging out in an Airstream hooked to a snowcat. A year before this had been a dream and right then and there, the dream became reality.

We did not get back to the parking lot until midnight and several of our vehicles were completely stuck in snowdrifts from the storms, but we had a snowcat! Mason (co-owner of Weston Snowboards) showed his cat driving prowess and pulled car after car and truck after truck out of the lot.

There was no doubt from anyone involved that this was the first of many more adventures of the Basecamp and Tucker; paired up in perfect, snowy, harmony. 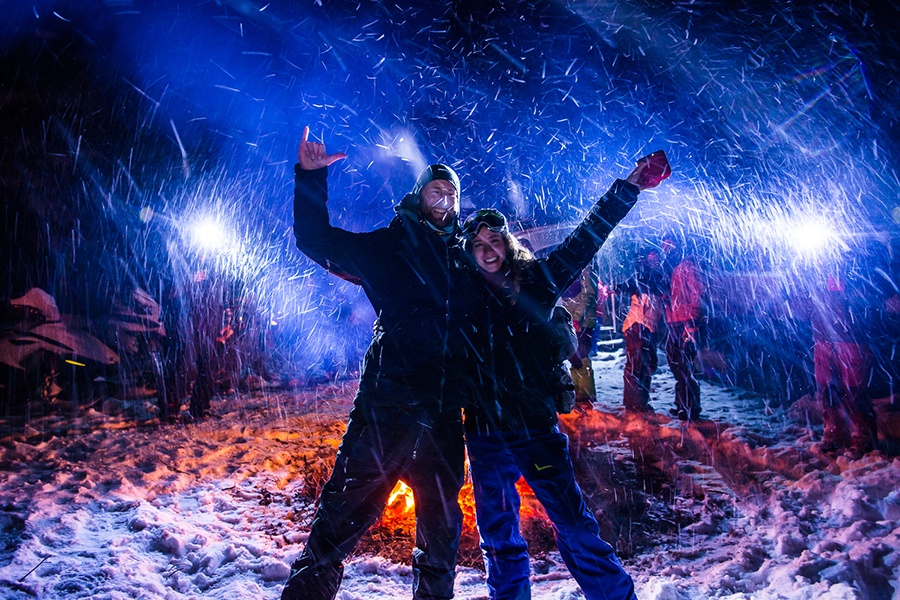 This endeavor was crafted and taken on by The Public Works, a Denver based creative agency. TPW has been working with Airstream for years on product R&D, marketing and other creative endeavors. With a long history in the snowboard industry it felt like the logical challenge was to take the Airstream Basecamp snowboarding. Much care was exercised in this project and there was an acknowledged risk that damage might be incurred while pushing the boundaries with this trailer. Hard to say “Don’t try this at home” when you will most likely be on the road with your Airstream, but please make wise decisions and understand the potential consequences.

Special thanks to our friends at Weston Snowboards for being so gentle on the throttle of their Tucker Snowcat.

See you in the mountains!

The team at The Public Works | www.thepublicworks.biz

Airstream Basecamp is the RV Business™ Magazine's 2017 RV of the Year. Read more blog posts about the award-winning Basecamp here.