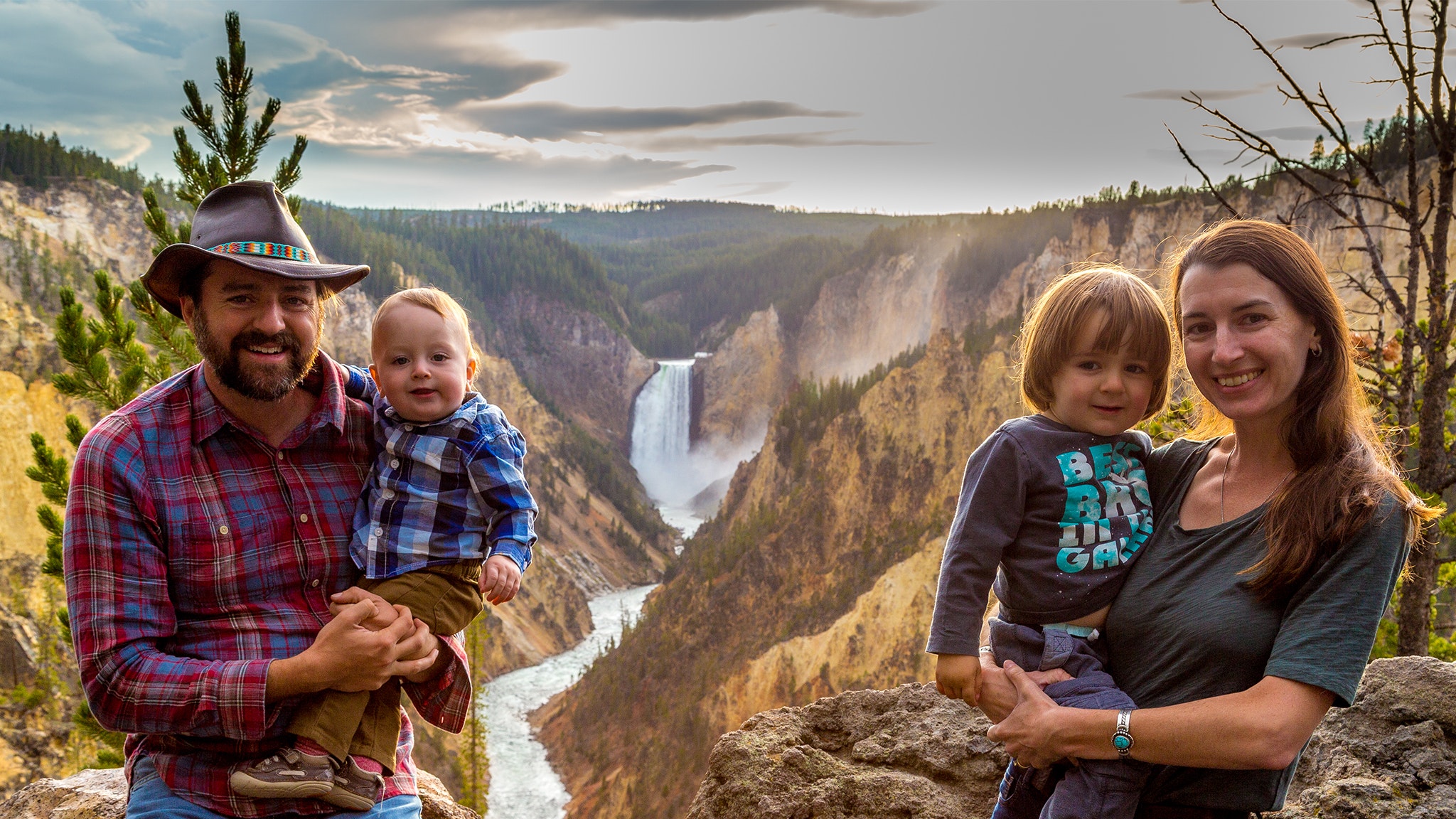 Nina and Eric Ritchie live in Chinle, AZ. Set in the heart of the Navajo Nation, the desert town may seem like the middle of nowhere to some. But for these two physicians, Chinle is the center of a world built on community service and outdoor adventure.

When the Ritchies aren’t tending to the well-being of the Navajo Nation as doctors with the Indian Health Service (Eric) and the Johns Hopkins Center for American Indian Health (Nina), you will most likely find the couple and their two boys camped somewhere in the Four Corners region in their 19-foot 2005 Airstream International.

“We’re probably putting about 10,000 miles a year on the Airstream between weekend trips and longer outings, says Eric.

As Nina observes, it’s easy to rack up lots of Airstream miles and nights when you live in the middle of a natural wonderland. “We can drive maybe three hours in any direction and come to a spectacular destination,” she says. “We live close to several National Parks. Monument Valley and Valley of the Gods are even closer, about an hour-and-half away.”

The Ritchies weren’t always such avid outdoors people. Neither Nina nor Eric grew up camping or hiking. Nor did the college sweethearts take to the woods during their time as undergrads at University of Florida. It wasn’t until they found themselves living in Boston that they felt the urge to get out into the wild.

“I don't know if it was a weird reaction to being in a city environment for the first time or the intensity of the training we were undergoing,” says Eric. “But we started seeking out those opportunities, whether it was out West or in the White Mountains of New Hampshire. In our limited off time, we started going to National Parks and doing these kinds of things.”

One particular adventure changed the direction of their lives.

“Our first experience with the Southwest was the end of our intern year when we hiked the Grand Canyon, North Rim to South Rim with my dad,” says Nina. “That was the first time we came to the Southwest, and I think that it just blew our mind. We didn't really understand or have a concept of the grandness of the landscapes out here.

I think it just got into our skin; it dug itself into our souls, really. It didn't feel strange to move out here. It almost felt like we were coming home.”

Nina and Eric were driven to become doctors by a shared desire to provide primary medical care to underserved communities, particularly rural populations. So, when two fellow residents waxed poetic about their rotation in the Navajo Nation with the Indian Health Service (IHS), the Richies were all-in.

The couple began working at the IHS’ Chinle Comprehensive Health Care Facility in 2012. Here they have found rewarding work and deep connection.

“We are right smack dab in the middle of the Navajo Nation,” says Nina.”There is a strong sense of community and welcoming in this town, which really appealed to us. Many of our co-workers are Navajo, born and raised in Chinle. This place is so filled with warmth and kindness.”

Nina and Eric worked four-day weeks, which left them tons of time to explore their new home. They hiked and tent-camped their way across the Four Corners with joyful abandon.

And then came the kids. Nina and Eric didn’t want to give up their outdoor lifestyle, but they realized that tent camping with two very young boys wasn’t optimal.

“Particularly when we had our second child, car-camping with a tent started to seem pretty small,” says Eric. “We were looking for more ways to stay on the road but do it with kids in tow. That's where the trailer came into view.”

Adds Nina: “We also wanted to expand our camping season because we had many nights in the tent where we were freezing our tootsies off. It's hard to do that when you've got an infant and a toddler. You can do it; it's just that our two boys are especially wild and curious. Sometimes it's good to have a boundary for them. When conditions are a little questionable outside, you can close the trailer door and keep them inside with you, because they're very adventurous.”

After much research, Eric and Nina concluded at a 19-foot corner bed Airstream would give them the room they needed and be towable by their Toyota 4Runner. Settling on what they needed proved easier than getting their hands on the actual unit.

“We were shopping for trailers for a while – and both vintage and new,” says Eric. “But, there were some challenges with getting a trailer to our remote location.”

So, imagine the Ritchies’ surprise when they noticed a 2005 19-foot International CCD parked in a driveway near their home in Chinle. And imagine their delight when the owner agreed to sell it for a very reasonable price. 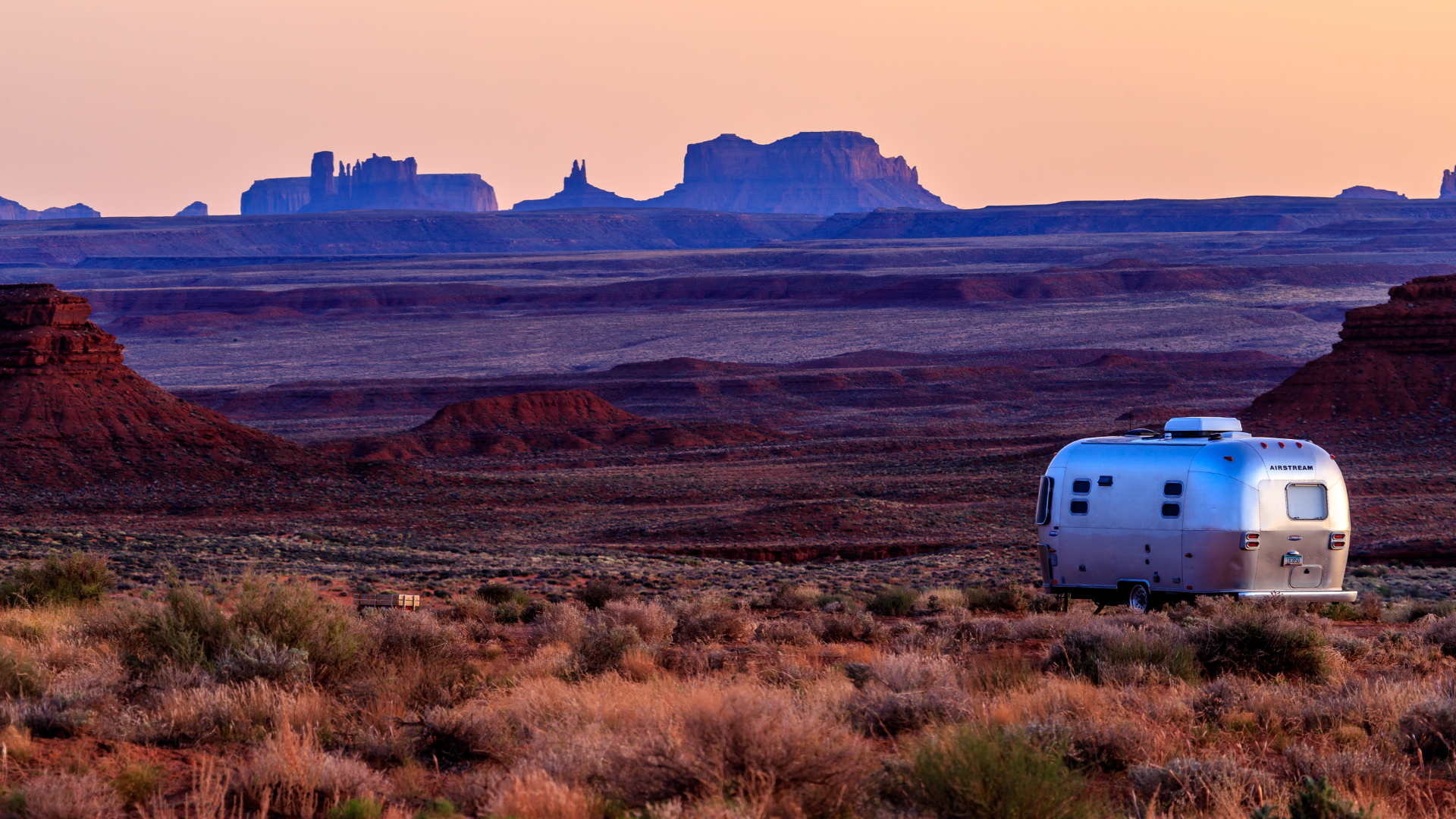 The Airstream, which the Ritchies named Brighty, was in perfect shape except for a small dent to the exterior, which Nina loved.

“I'm like a lot of people in that when I buy something brand spanking new, I want to keep it perfect,” she says. “I think that I would have been more afraid to use our Airstream; to take it down some of those bumpy roads to that epic boondocking site. I'd be like, ‘Oh my god, what if a rock kicks up and dents the exterior? What if we jiggle something loose? I think that buying used made us more comfortable with really using it.”

In short order, the Ritchie clan was on the road again. Indeed, their younger son was just 12 days old when they took their first trip in the Airstream. The family camps an average of every other weekend, year-round. They’ve made several long trips, too, including jaunts to the West Coast, Yellowstone and the Dakotas.

Eric says the couple’s simple style makes it easy to take off on short notice when the urge hits.

“We are pretty minimalist about our camping experiences,” he says. “We've met plenty of other Airstreamers on the road with finer taste; people who have a much more involved camp set-up. We're all about just hitting the road and then letting our kids run around in the dirt.”

Indeed, these days the couple often choose their weekend destinations to accommodate the kids. There’s less trail hiking and more time spent in places where the boys can explore and burn off energy. 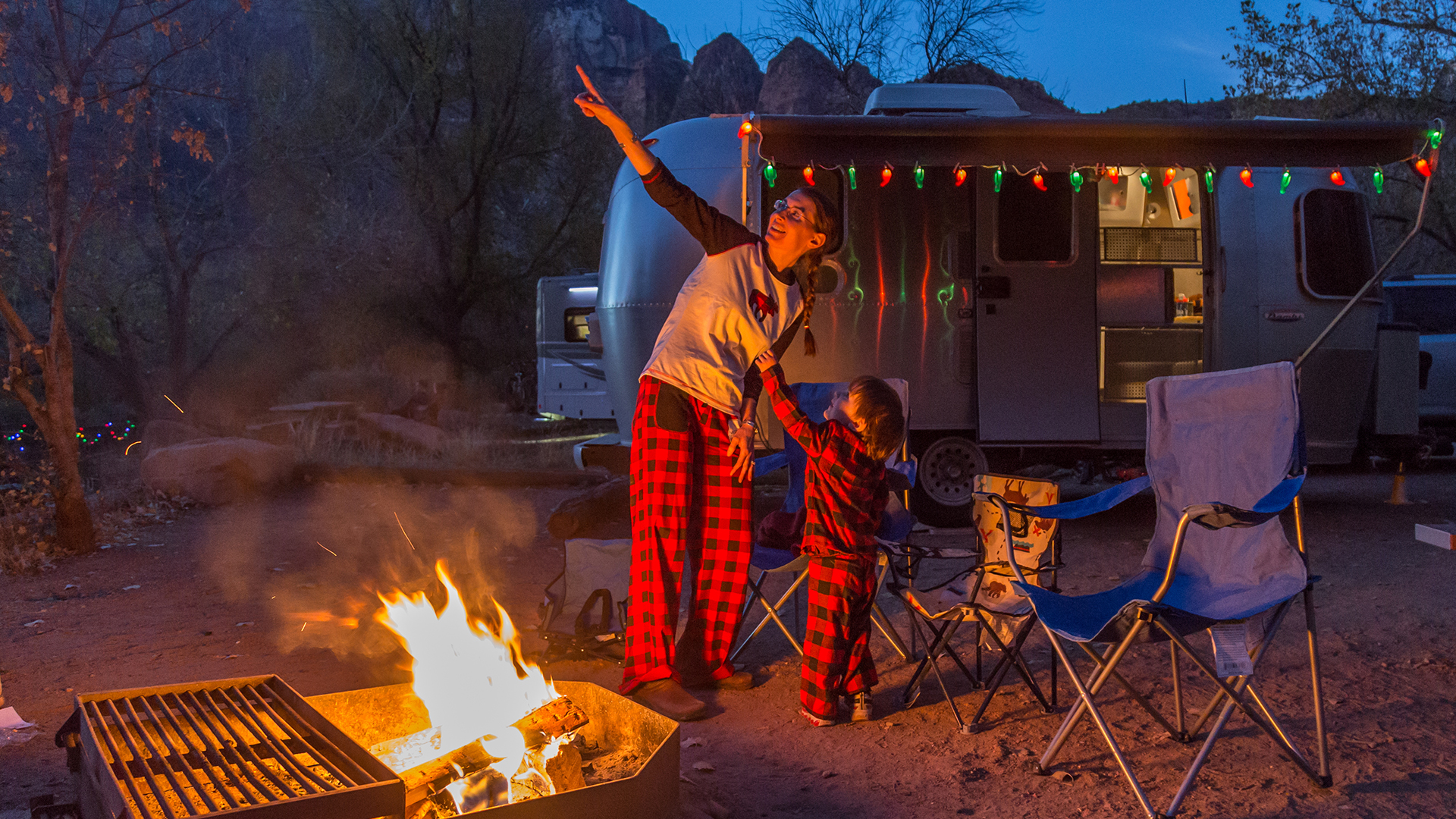 “We look for places where we know that we can keep the boys entertained,” says Eric. Anything that's by water is a big hit for them because they'll play, they'll throw rocks, they'll do all kinds of stuff around those bodies of water. In pre-COVID days, we tried to find a sweet spot, something that'll have a lot of natural beauty, but then maybe also had access to a few kid-friendly amenities like a playground or some attraction nearby so we could do some of those things with them if we needed to.”

While the kids are running amok, Nina and Eric polish their nature photography skills, a hobby that has grown alongside their passion for the outdoors.

The COVID-19  pandemic has understandably impacted the Ritchies’ ability to ramble. The Navajo Nation has been particularly hard hit by the coronavirus, which has meant long hours for these two doctors. But when they manage to wrangle some time off, Nina and Eric have resumed heading for the hills. Or desert. Or river. Prudently, of course.

“We think the key to social distancing is dispersed camping and boondocking,” says Eric. So, we are focusing on those locations where we can still let our kids run wild and not worry that we're going to bump into neighbors in the camp.”

Ads Nina:  “We normally gravitate towards boondocking and dispersed campgrounds anyway, so it's not anything different for us.” 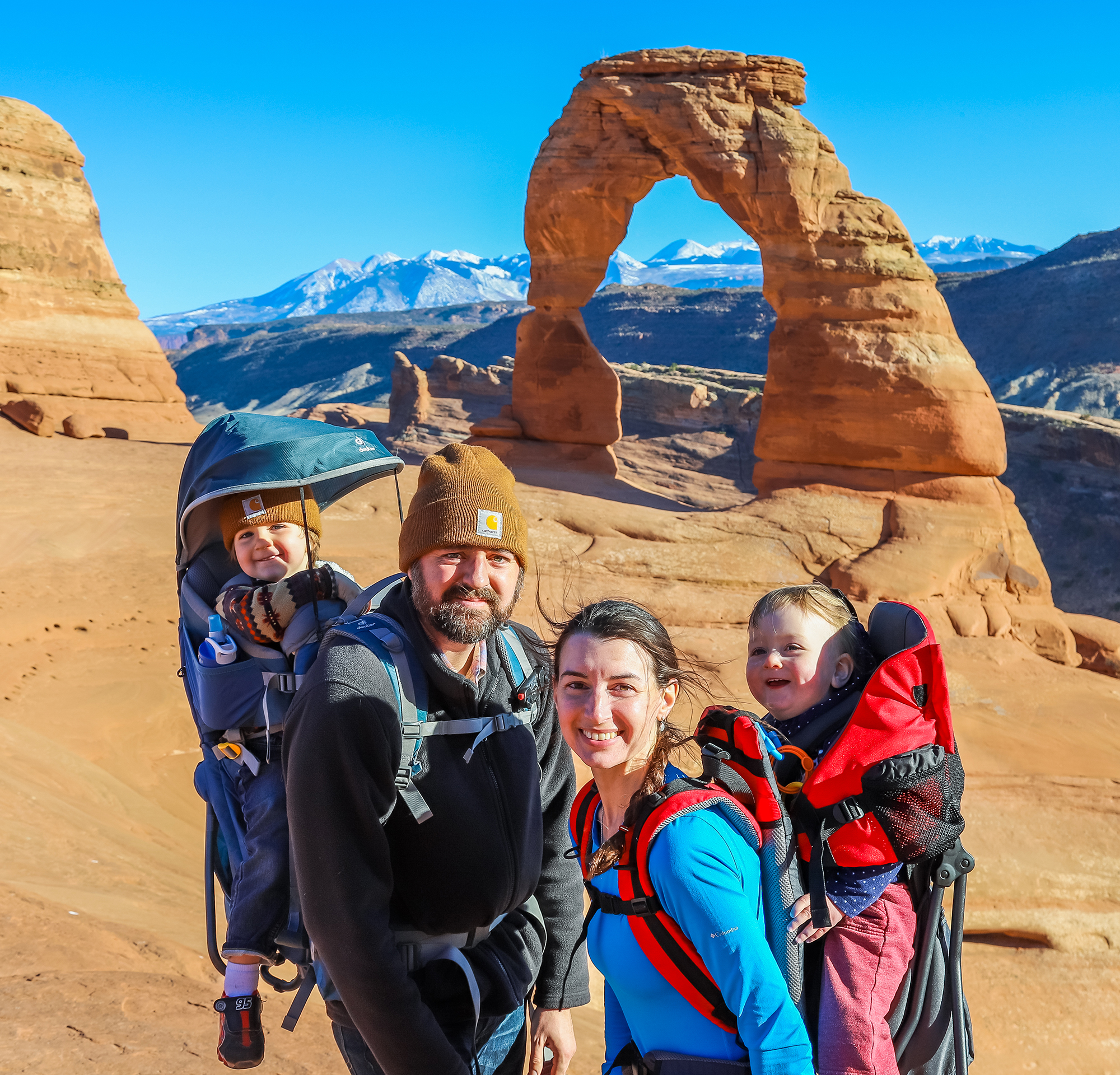 Despite their eastern roots, Nina and Eric say they can absolutely imagine spending the rest of their professional lives in the Southwest, serving the community, raising their kids and exploring every rugged nook and colorful cranny of their mesmerizing new world.

“There's really nowhere else we can picture ourselves,” says Nina. “I think that this is our home, this is our community, and we just love living here.”

Keep up with the Ritchie's on their Instagram channel.