The National Trust is on a trek across the Mother Road this summer – in an Airstream! Each week, a Route 66 Roadie will be documenting their experiences, attending meet-ups, and bringing attention to an icon of American history. Today, Roadie Lina Tran shares her experience from week two of the #Preserve66 trip! (Photography: David Kafer)

Melba was showing us around her town, and herded us into a melancholy, late-1800s home– a once-brothel, turned haunted antique mall, turned back to haunted brothel. (They plan to reopen for ghost tours soon.) We went into a dark room upstairs—the “Madding Room”—which Melba refused to enter; the ghost who haunted it was known to wrap her cool fingers around visitors’ necks. I sniffed the air for licorice, rosewater, sulfur—each, I was told, a tell-tale sign of a presence. Nothing approached me, but the floor below did seem to tremble after a while. This was just the first of many ghost stories I’d encounter on my trip along Route 66, a highway just as much for spirits and their stories, as for the living.

I did all the things Melba said I would during my week on the road with the National Trust for Historic Preservation. I ate constantly: fried pickles, pickle slushies, onion burgers, chicken-fried steaks, tired salads, chocolate malts, pho. I bought cheesy postcards, too many pins for one jean jacket, and a Route 66 mood ring I wore on my left ring finger all week. For the most part, it was blue—indicating love. (Was it the relentless heat of an Oklahoma summer, or was I in love with the Mother Road?) I left a bit braver, having learned to make friends with anyone drawn to our caravan, curiosity and adoration for Route 66 in their eyes. 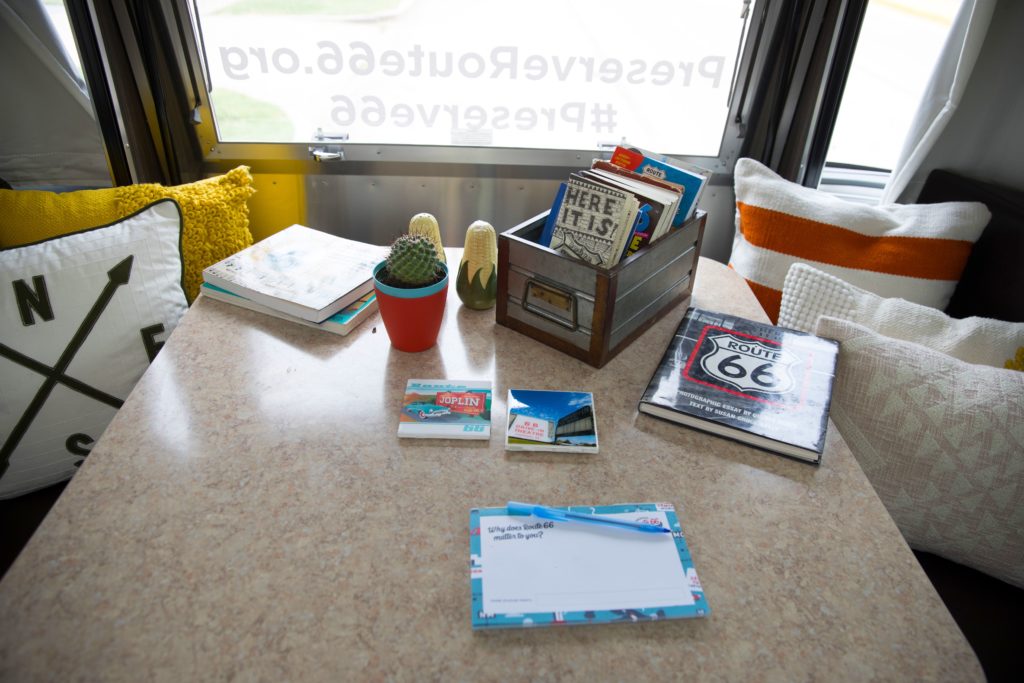 We traveled with a 27' silver Airstream trailer, its side emblazoned with our Preserve Route 66 logo. In a way, we became the Airstream; it was a part of our identity. We drove into towns and set it up for events, unfolding the awning and inside, laying out maps and trinkets from our travels.

Locals would sidle up and say, “We saw y’all coming into town. Where y’all from?” Such is the layout of the towns along Route 66: with a main street, not much can happen without the notice of the people who live there.

Of the three states I visited—Missouri, Kansas, and Oklahoma—or for that matter, any state through which Route 66 passes on its way from Chicago to Los Angeles, Kansas has the shortest segment. At 13.2 miles, it’s just one half marathon of highway, paved in the late 1800s with refuse from the mines far below. (Cyrus Avery, father of Route 66, directed the highway through Kansas to save money, taking advantage of the roads miners had already paved into Galena.)

Length of the road has little to do with the extent of Kansas’s Route 66 pride. Galena pulses with a momentum toward revitalization and commitment to preserving their historic buildings. I saw the question “GOT IDEAS?” painted on one orphan storefront’s window; novel approaches are welcome here. In this town of 3,000, on a main street that stretches no more than a mile, three businesses opened in the past year.

Down the road—due west, of course—is Baxter Springs, Kansas, another once-booming mining town. At the Baxter Springs Heritage Center and Museum, I learned of more ghosts: Cherokees forced away during the Indian Removal, Union soldiers killed in a massacre, and entire neighboring towns condemned, the risk of cave-ins too great due to over-mining.

Retired English teacher and longtime museum curator Phyllis Abbott gave me a tour. I was told she’s touched literally every artifact in the collection. In one display—“a girl’s wardrobe in the 50s”—I complimented a gray merino sweater set with a beaded collar, declaring it cute enough for me to wear, here, now, in 2018.

“That was mine!” she said, tickled. Really: The sign below it said “On loan from Phyllis Abbott.”

If Route 66 were an engine, it would run on volunteers. They are generous with their time, spirit, and stories—and in Phyllis’s case, possessions. Why do they do this? And how are there so many history buffs who live along the Route? Maybe it’s a sort of predestination: something must plant itself in the mind when you’re a part of this 2,400-mile-long village, which thrums with a history spanning peoples and decades far vaster than any one individual. The road irreversibly shapes the lives of the people who live on it, and they bring color and character to the road; they’re tangled up in each other.

Past Baxter Springs, past the anticlimactic three-state corner, and into Oklahoma, we arrived in Miami—pronounced “my-AM-uh.”

“We have a song we’d like to play for you,” Dillon, one of our tour guides, said. “It’s just one minute.” I stood on the stage of the Coleman Theatre and sound crescendoed into a zippy opening song, filling the space as if an orchestra of giants played for us, instead of the one (albeit massive) Wurlitzer organ.

The Coleman’s story is a happy one. It opened in 1924 and declined over the years, but in the late 90s, the community rallied to restore it to the splendor of its glory days as a vaudeville theater. (There’s a National Trust connection too: In 1990, the Trust helped contract an engineer, who surveyed the theater, proving it could be repaired.) Penny by penny, they raised funds, dashing to the hardware store whenever they had enough to buy another bucket of paint.

“Everyone has memories of the Coleman; that’s why it was so important to save,” our second guide Rhonda said. “High school graduations, dances, recitals, shows—all of it happened here.”

Throughout my trip, I’d hear stories of people volunteering and mobilizing to save their most beloved places. Route 66 is dense with these icons, and those who love them fiercely. After 60 seconds, the music ended with a flourish, and our guides smiled with pride. And I could tell even for them, this never gets old.

Perpetually behind schedule—there’s so much to see, so many to talk to—we continued the journey west. In landlocked Oklahoma, we found the world’s largest mammal bathing in a shallow, stagnant pond. Zoologist Hugh Davis built Blue the concrete whale in the early 70s and presented it to his wife Zelta on their 34th wedding anniversary.

Route 66 is a world of such superlatives and contrasts. In just a few days, I saw a giant milk bottle, touched the world’s longest hand-carved wooden chain, and took a selfie beneath the world’s biggest gas pump. You can live on the road, dreaming up and constructing these wonders, or you can ride it. This is small-town America, the roadside is drenched with the past, and people come from every corner of the world to see.

Often, ever heading west, we had to tear ourselves away from these small towns and their people. I missed the chance to tailgate and watch Ocean’s 8 at the drive-in theater in Carthage, Missouri. I hated not having time for the new space exhibit at the Pioneer History museum in Chandler, Oklahoma. In Arcadia, Oklahoma’s Pops—the hours I could have lost, poring over bright shelves for Easter eggs like strawberry rhubarb- or teriyaki beef jerky-flavored soda pop.

A man in Tulsa, Oklahoma, brought 30 pounds of binders to show us, each filled with Route 66 maps he’s collected over the years. He shared with me his dreams of a mobile map library that he drives up and down the road. A young woman, whose mother and father grew up on 66, gave us ice on a hot day and told me she hopes to open a Route 66 inn. In El Reno, Oklahoma, my fellow road-tripper Diana complimented a woman’s necklace; she took it off and placed it around Diana’s neck when we said good-bye.

Sometimes, the drive is lonely. Faded advertisements—ghostwriting, Route 66-ers call it—and orphan signs, those without their parent buildings, dot the streetscapes. In Afton, Oklahoma, paint peeled off the walls of dilapidated storefronts, and goods lay in dusty, forgotten piles behind cracked windows.

Keep driving west, past El Reno to Weatherford, Oklahoma, and the land morphs before your eyes. (Built in the early 30s, this segment is one of the best-preserved stretches of the entire Route.) Gone are the flat prairies; here now, rolling green hills, low-lying trees, and wide swathes of farmland. Occasionally, not so far in the distance, I could see the freeway to our left, spotted with exit signs, semi-trucks, and fast-moving cars. We were headed in the same direction, traveling in parallel, but they were on a different mission: to get somewhere, and as soon as possible.

This was not the mentality that propelled us on and on, from Chicago to Los Angeles. As for my leg of the journey, I knew where I would begin—Springfield, Missouri—and that it would all end in Clinton, Oklahoma. There was no grand finale to my trip. I backtracked east to Oklahoma City, where I got on a plane back to D.C., head filled with stories and scenes from the road, arms and legs a few shades darker than they were the week before. It was never about Los Angeles. 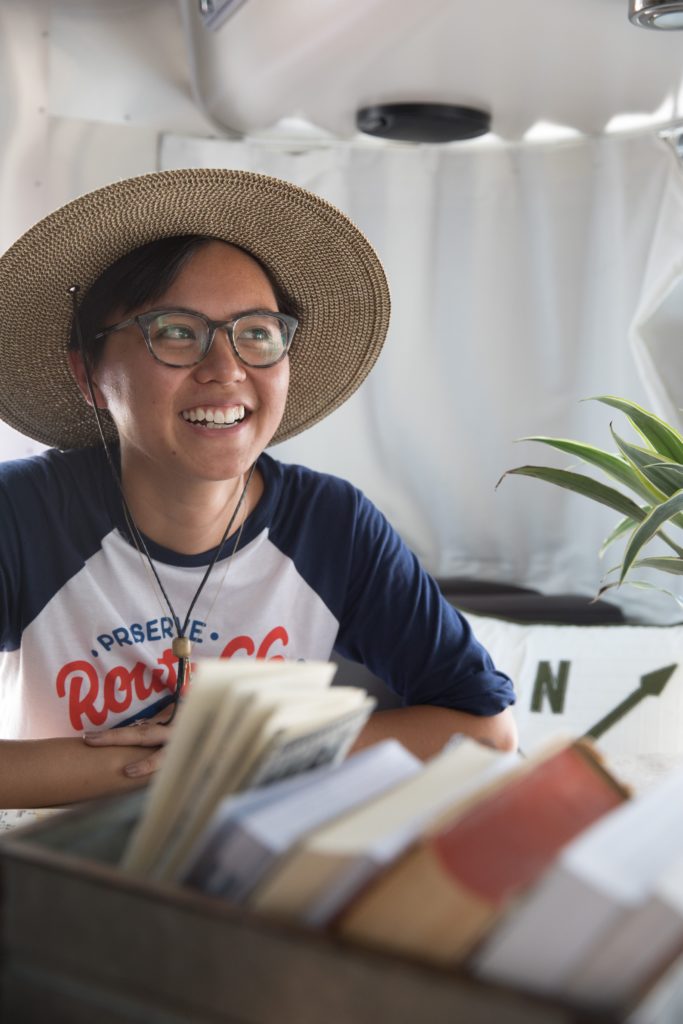