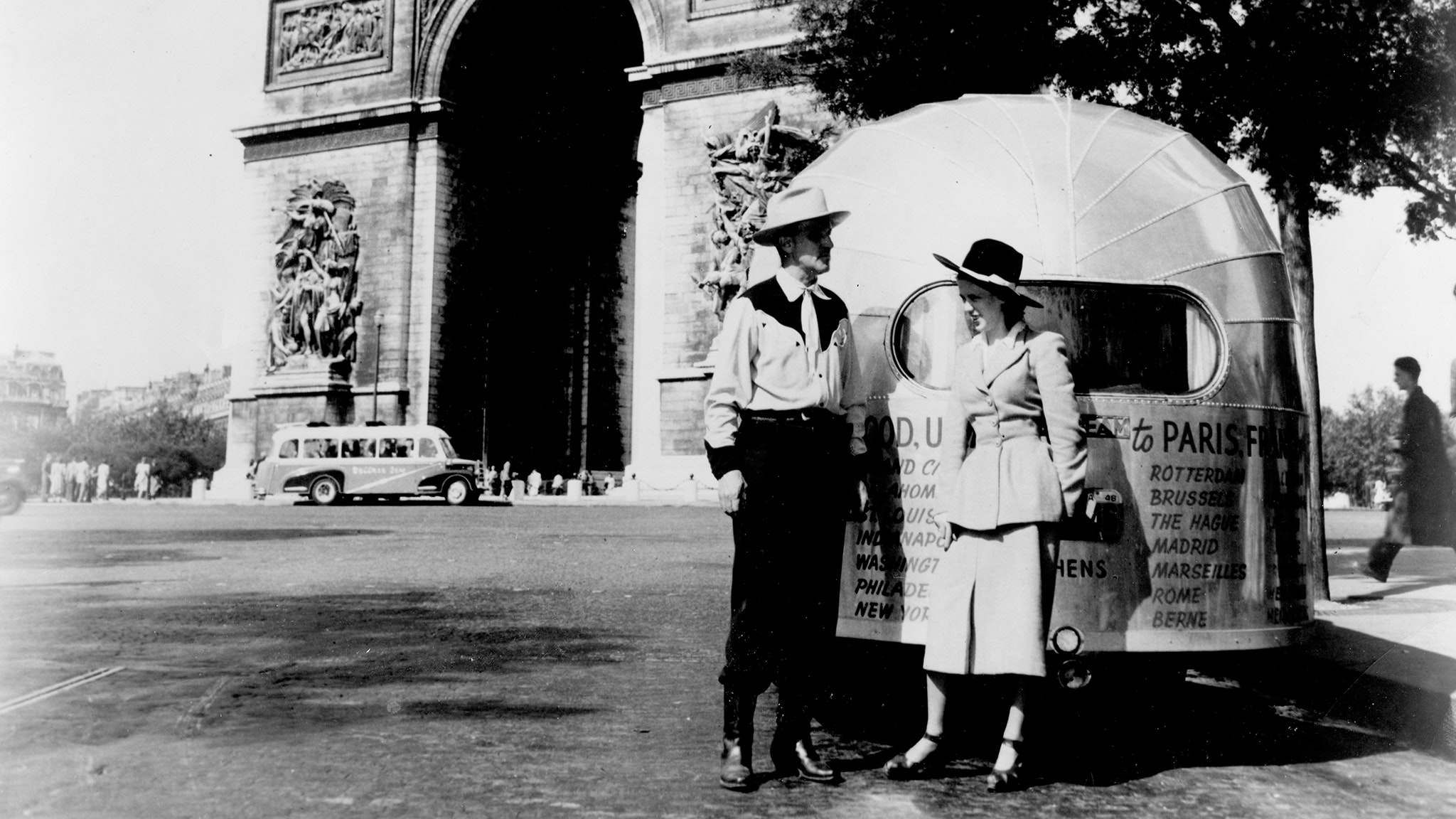 In 1948, Wally left for his first overseas trailer trip to Europe with his lifelong friend, Cornelius “Neil” Vanderbilt, Jr. Neil wanted to film postwar Europe for his lecture tours and Wally wanted to road test his trailer to find weaknesses that needed fixing, as well as improvements that could be made. The two traveled in a 22’ Airstream to about a dozen countries and Wally painted the name of each city that they visited on the trailer, labeling it the “World’s Most Traveled Trailer.” Unknowingly, this overseas trailer trip between friends would be a precursor to the famous Airstream caravans. 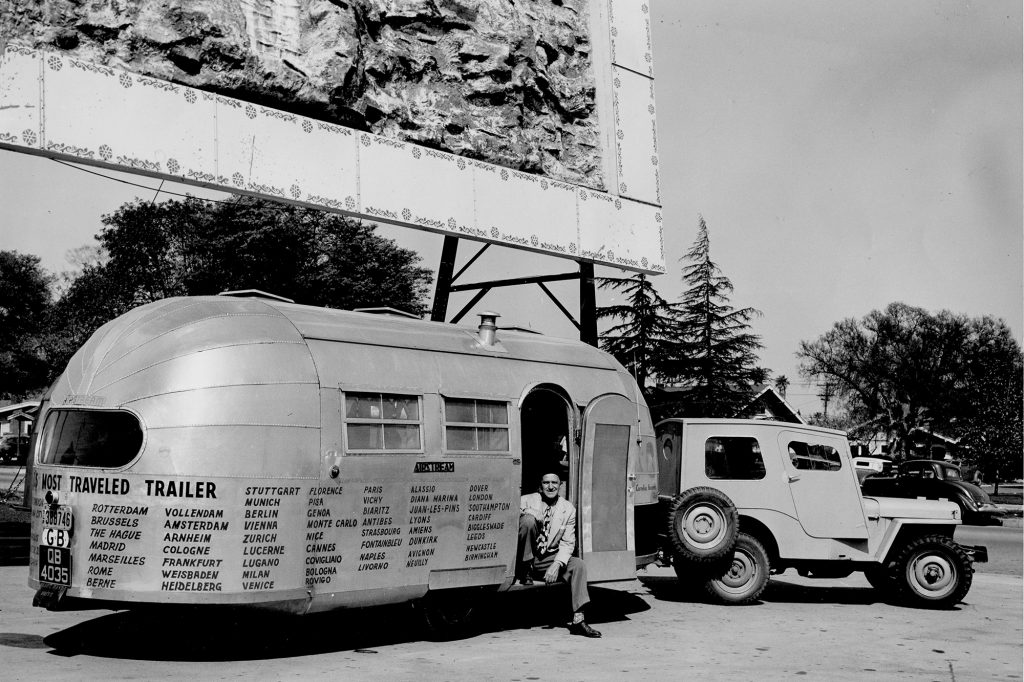 Perhaps inspired by fond memories of his trip with Neil, in 1956, Wally took on an unprecedented task of shipping 36 Airstreams and 87 caravanners across the Atlantic Ocean for the first Wally Byam Caravan to Europe. Over the course of six-months, the caravanners visited 16 countries and traveled 16,000 miles. Wally and Stella traveled in a custom-built 26’ Airstream that was painted white, making it easy to spot the caravan leader. 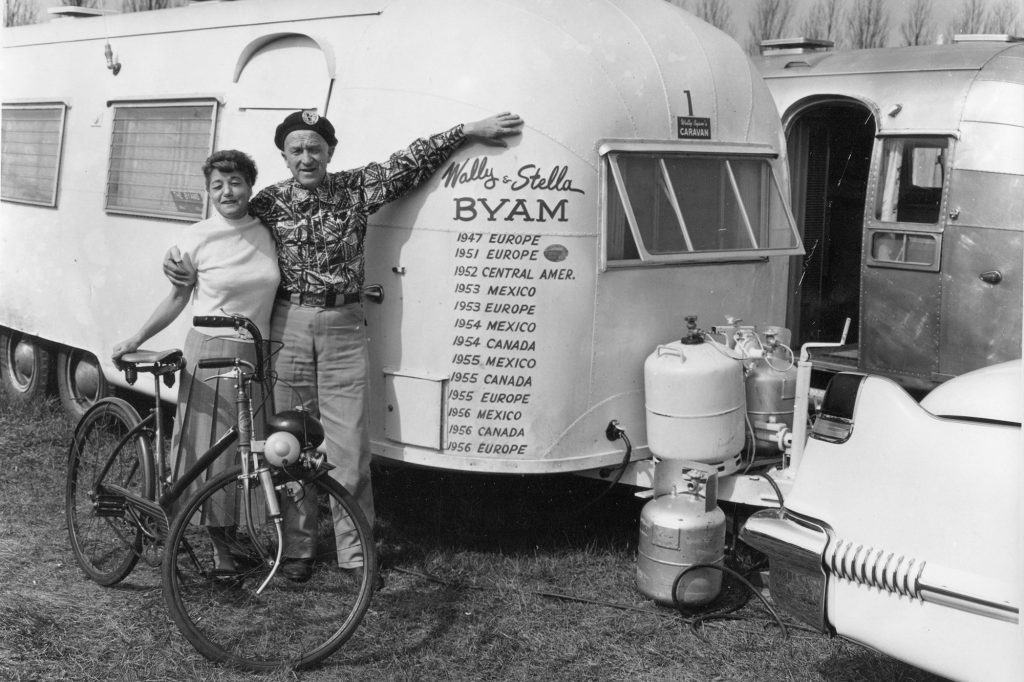 The caravan was covered by National Geographic in an article written by Norma Miller and photographed by her husband Ardean Miller. Ardean Miller would go on to photograph many of the early iconic Airstream advertisements. 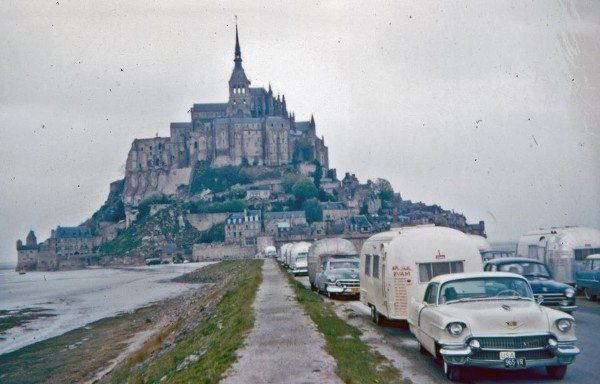 Three freighters were used to ship the Airstreams and tow vehicles from New York to Rotterdam. The caravanners met with foreign officials and members of European caravan clubs. They visited famous sites including the Alps, the Eiffel Tower, the Leaning Tower of Pisa, the Vatican, and several castles in Germany. They camped along the Rhine and toured the canals in Venice. They watched a bullfight in Barcelona and the opera in Vienna. They fed carrots to bears in Switzerland and danced with locals in a town square in Belgium. Returning home from Europe once again with memories that would last a lifetime, Wally knew that this would be the first of many Airstream caravans to Europe.