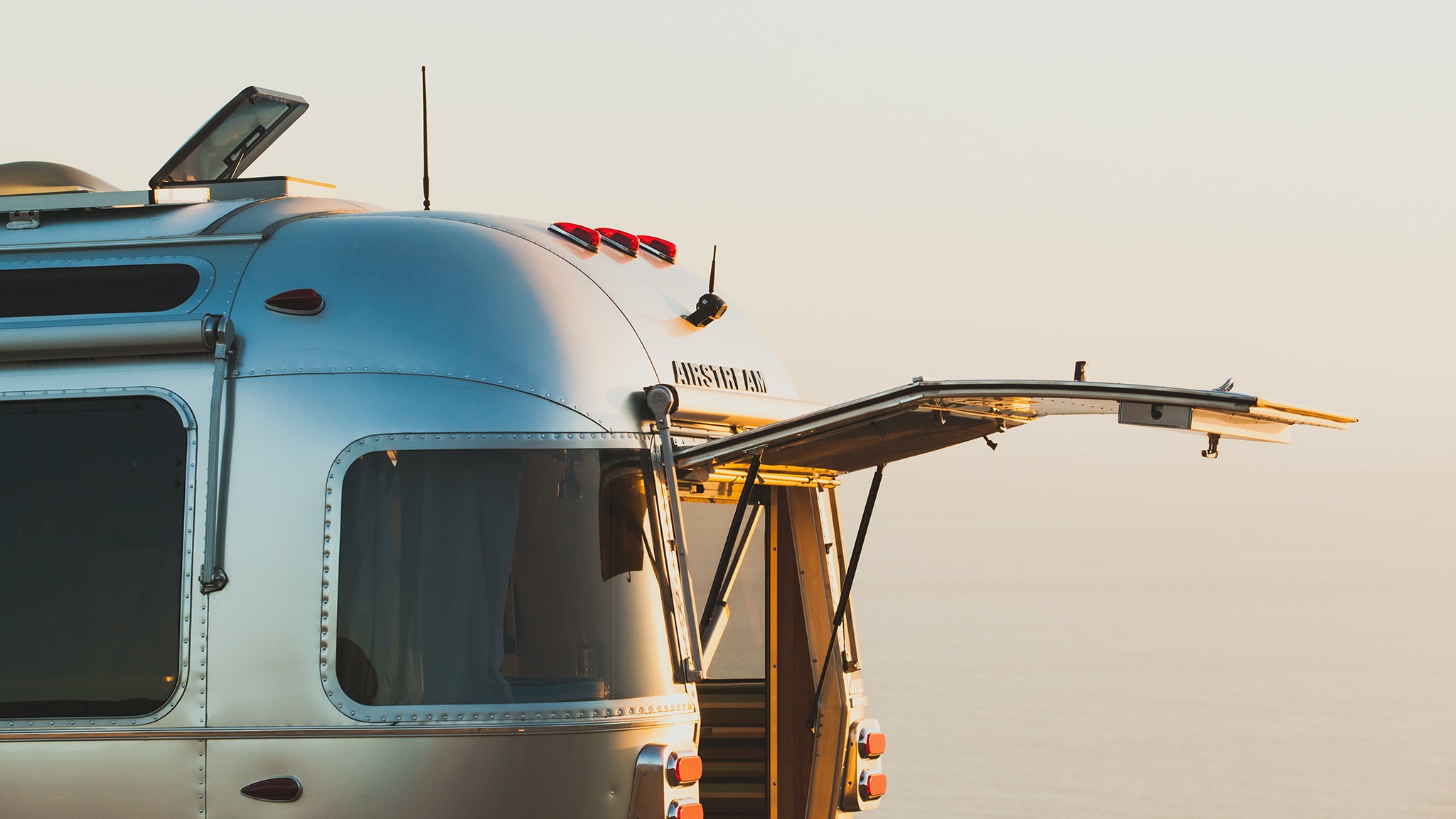 Flexible, functional, and fun, our rear hatch is an open door to adventure. Now, it’s available on more models and floor plans than ever before.

The rear hatch has been a popular Airstream design feature for many years. It was first developed for custom and commercial Airstreams with unique space needs. Some of the well-known historic models with a rear hatch include the Funeral Coach where the hatch was used to store flowers, and the iconic Excella Motorhome known as the Astrovan which was used during NASA’s Space Shuttle Era to transport astronauts to the launch pad.

In 2009, the rear hatch was introduced into the main travel trailer line with the production of the PanAmerica. The PanAmerica was a 34-foot toy hauler with living quarters in the front of the trailer and a built-in garage in the back for motorcycles, ATVs, and other adventure gear. A limited number of PanAmerica travel trailers were produced but the ever-popular rear hatch design would later be featured in special and limited edition travel trailers including the Eddie Bauer, Pendleton, and Tommy Bahama.

Earlier this year during the transition to model year 2021, the rear hatch was made available for more models than ever before. The popular optional feature can be selected on the following International and Flying Cloud floor plans:

Opting in for the rear hatch not only gives you the option to have a large door at the rear of the trailer, it opens up opportunities to experience Airstream life a little differently from the inside out. From creating a beautiful vista during an afternoon nap or daytime workstation, to being the perfect solution to loading and unloading larger gear for every adventure, the rear hatch is truly a game changer for those looking for ultimate flexibility in the 25FB and 27FB floor plans.

Love is an Open Door (or Hatch)

The rear hatch door is constructed with the same level of quality and engineering sophistication as the main entry door, which takes eight hours to manufacture and is built in-house from high-strength aluminum. Three heavy duty, one-piece hinges with 8 bolts holding each hinge tightly to the shell are located at the top while the door is held securely in the open position by a strut on each side. When the hatch is fully open, it is located 70” from the ground.

The large 46.5” x 50.5” door includes a window that opens up to three different levels. Similar to the rest of the windows in the Flying Cloud and International models, the window on the hatch door offers the ability to open more than any other window on the RV market so you can always get fresh air (even with the hatch closed). For those days of harsh sunlight, the retractable rear awning extends over the full window to help keep sunshine from entering and warming the inside of the cabin. 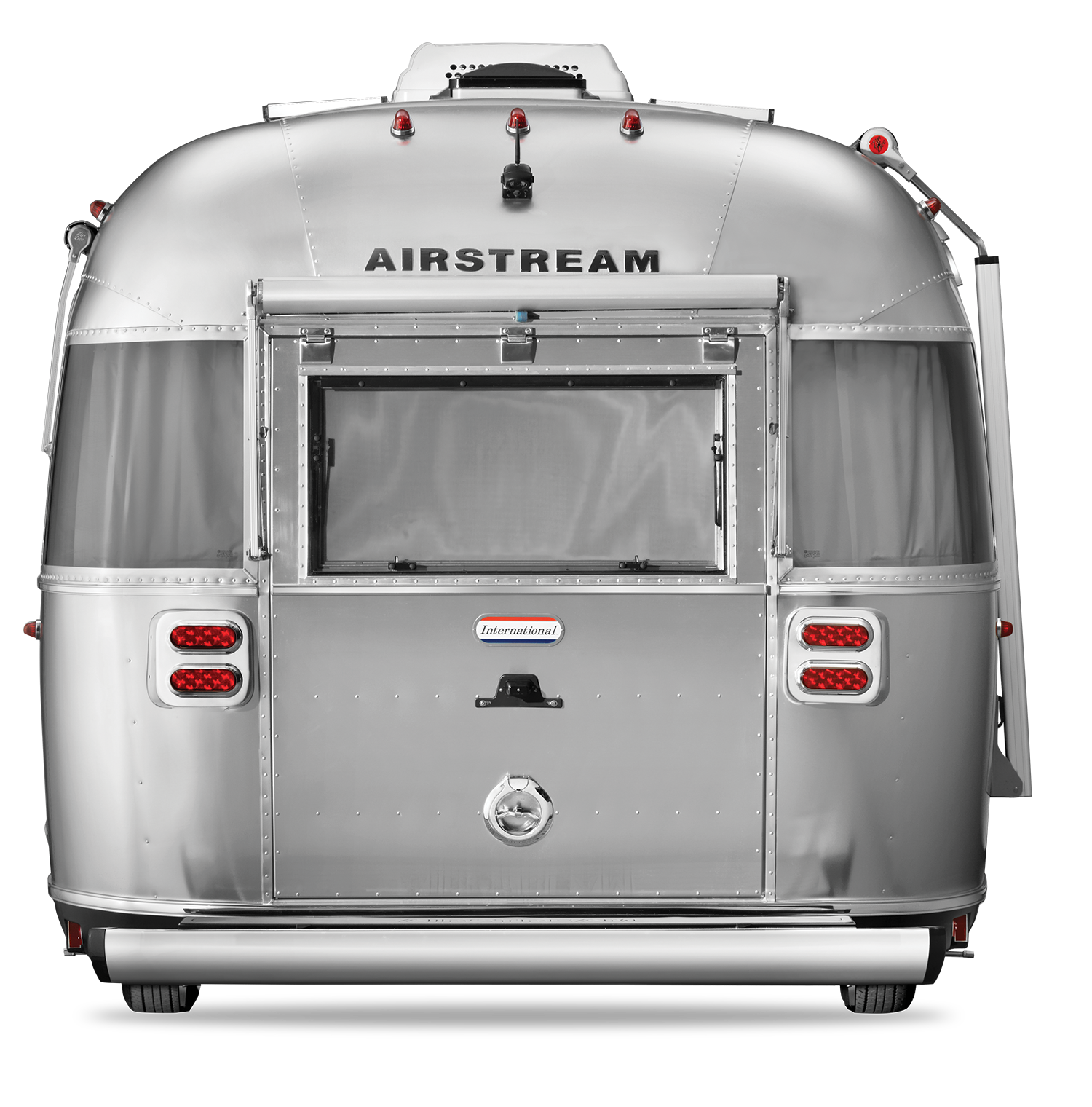 Located near the bottom of the door is the seamless ring pull and key slot which is unique to this door for extra security. By rotating the ring pull, the two-point latching system will engage and release with ease and ensure a sturdy fit every time. A door handle on the interior of the trailer also gives you the option to swing the door open from the inside, if desired.

Quite possibly the greatest benefit of the rear hatch is the fact that it provides a lot of flexible living, working, and relaxation options. Although the non-hatch models include the rear panoramic windows that wrap around the entire end of the shell, the hatch creates some extra magic by changing up the way the dinette is installed and the total number of setups that are possible. Although we tend to say less is more, it’s simply not true with this experience-enhancing feature. 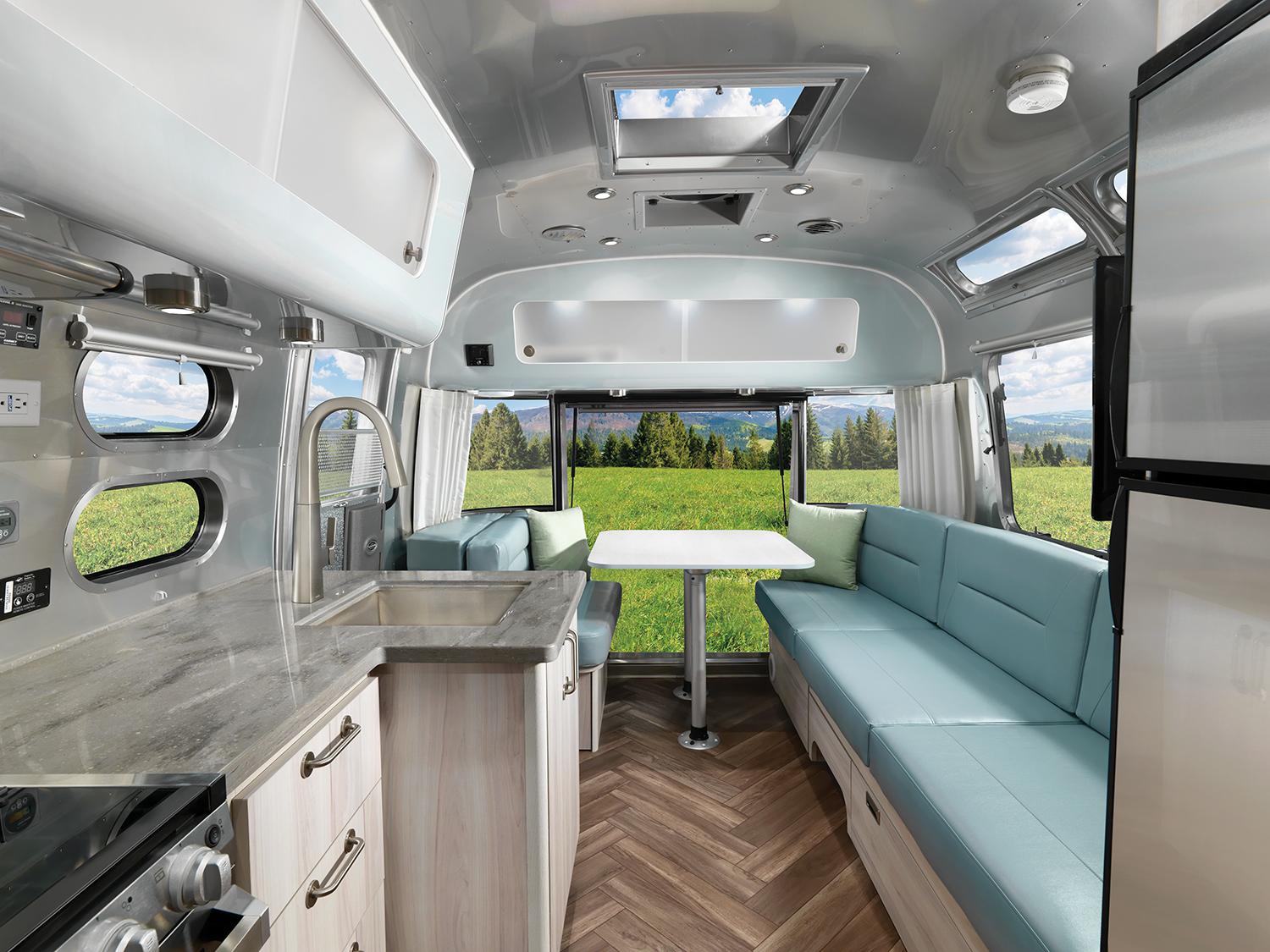 The rear hatch creates options to convert the dinette into three positions that all provide something special for owners.

Hatch Open, Dinette Up - Revel in wanderlust delight as the family gathers around the table for a meal with the rear of the Airstream overlooking a beach.

Hatch Open, Dinette Down - The perfect setup for the ultimate daytime nap as you look out the rear of the trailer into the wilderness. Simply remove the dinette table legs, lower the tabletop, and place the backrest cushions onto the surface to create a comfortable lounging or sleeping space.

Hatch Open, Table Removed - A massive area for loading/unloading or stepping in and out. With quick release table legs and tabletop, you can remove the table to open up the whole area.

Whether working from the road and capturing inspiration from the outside views or just swinging the door open to let the fresh air come through, the dinette area becomes something entirely different when that hatch opens up. To keep bugs and other undesired wildlife from entering the trailer, there’s a screen door that slides down and attaches to strong magnets.

To expand on the “Hatch Up, Table Removed” position, the rear hatch empowers owners to quickly load large equipment and gear with unmatched simplicity. Unlike the PanAmerica model which was intended for hauling an ATV or motorcycle, the current models aren’t engineered for those purposes. The Flying Cloud and International of today are optimized for tossing in equipment such as bikes, camp chairs, kayaks, paddle boards, outdoor mats, large bags, or even your Solo Stove. 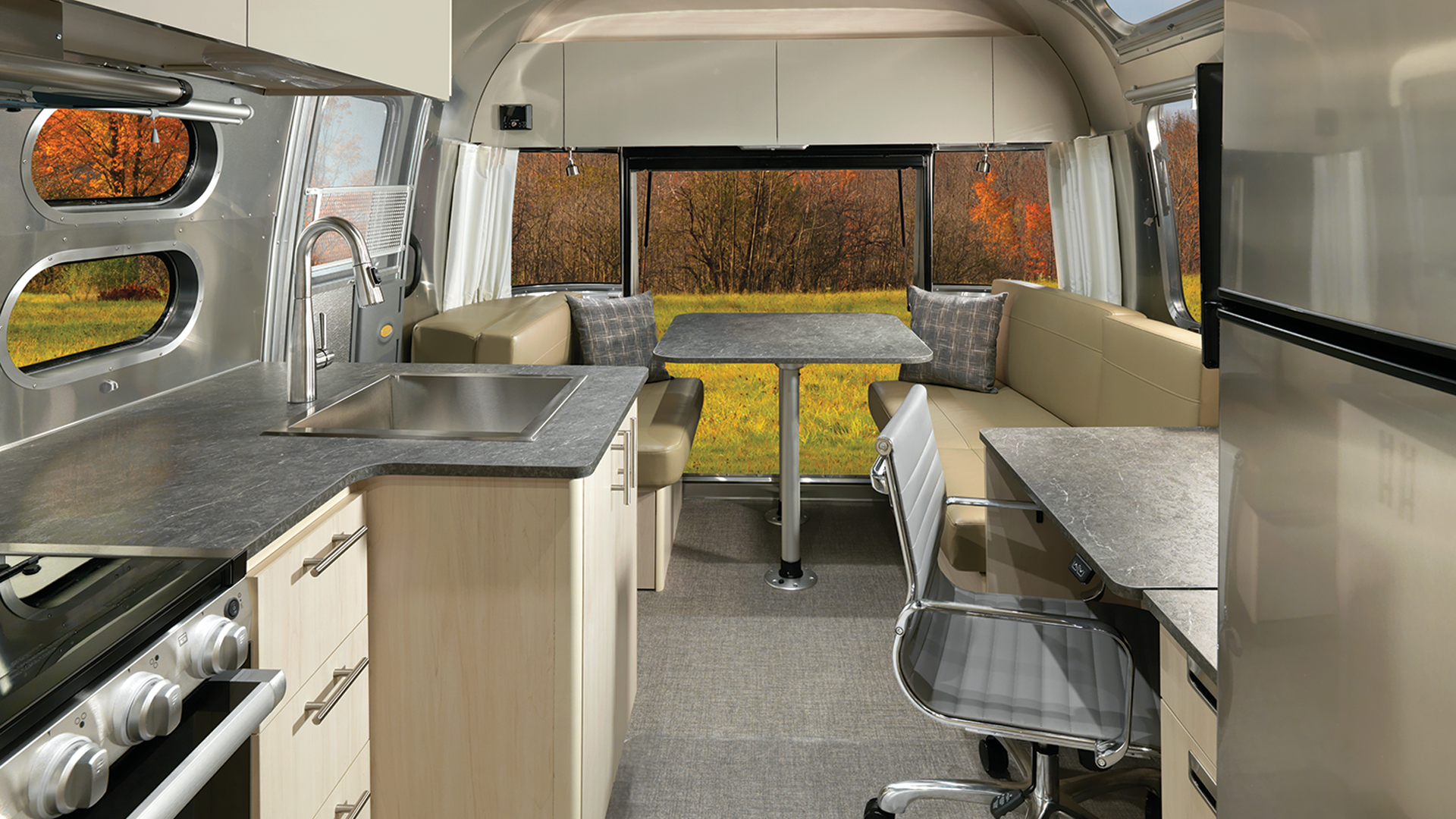 “The rear hatch makes it quick and easy to load gear in and out, especially larger items like my bike,” said Airstream Ambassador Austin Mann. “It lets in tons of natural light and is fantastic for ventilation.” 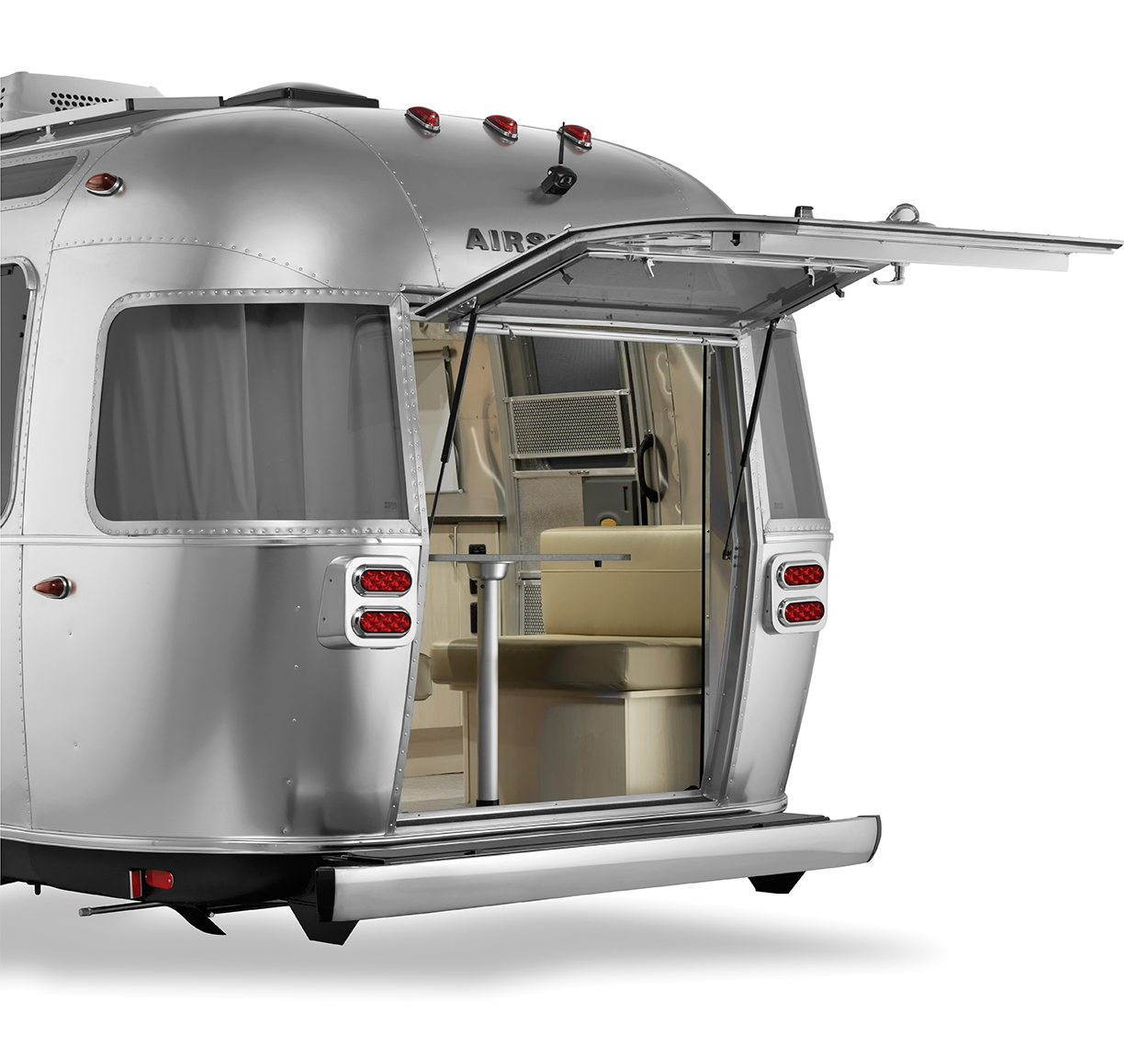 “We generally enjoy sitting outdoors for dinner but with the hatch we’ve been eating inside more which still allows us to feel really connected to nature,” said Mann. “With the hatch wide open and the screen door closed, we’re able to have the best of both worlds which is perfect.”

In addition to providing exterior storage for things like blocks, chocks, or chains, the trailer’s rear bumper provides a sturdy step to safely move through the door. The bumper includes an anti-slip grip so you don’t lose your footing while making your way through the door. 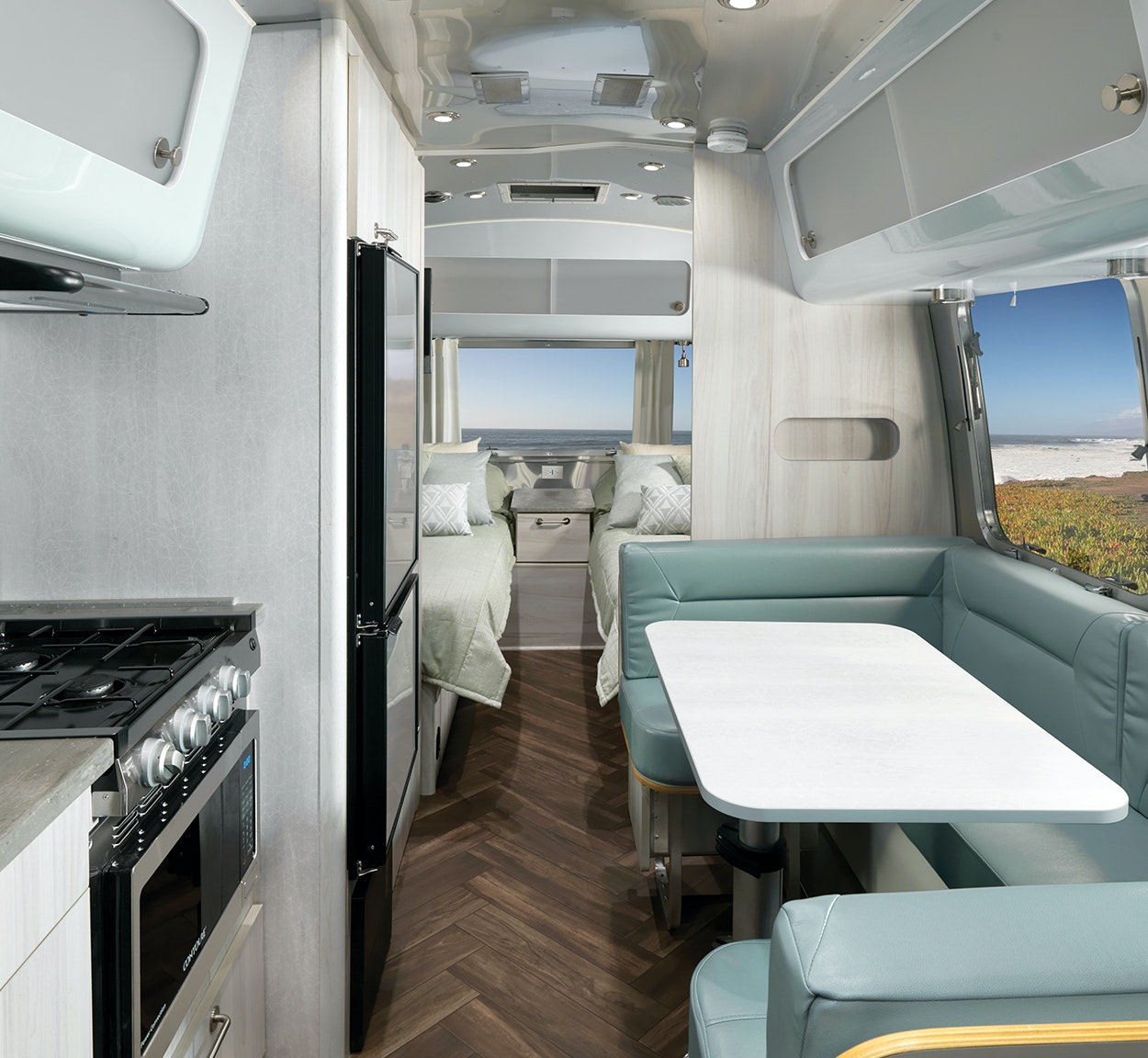 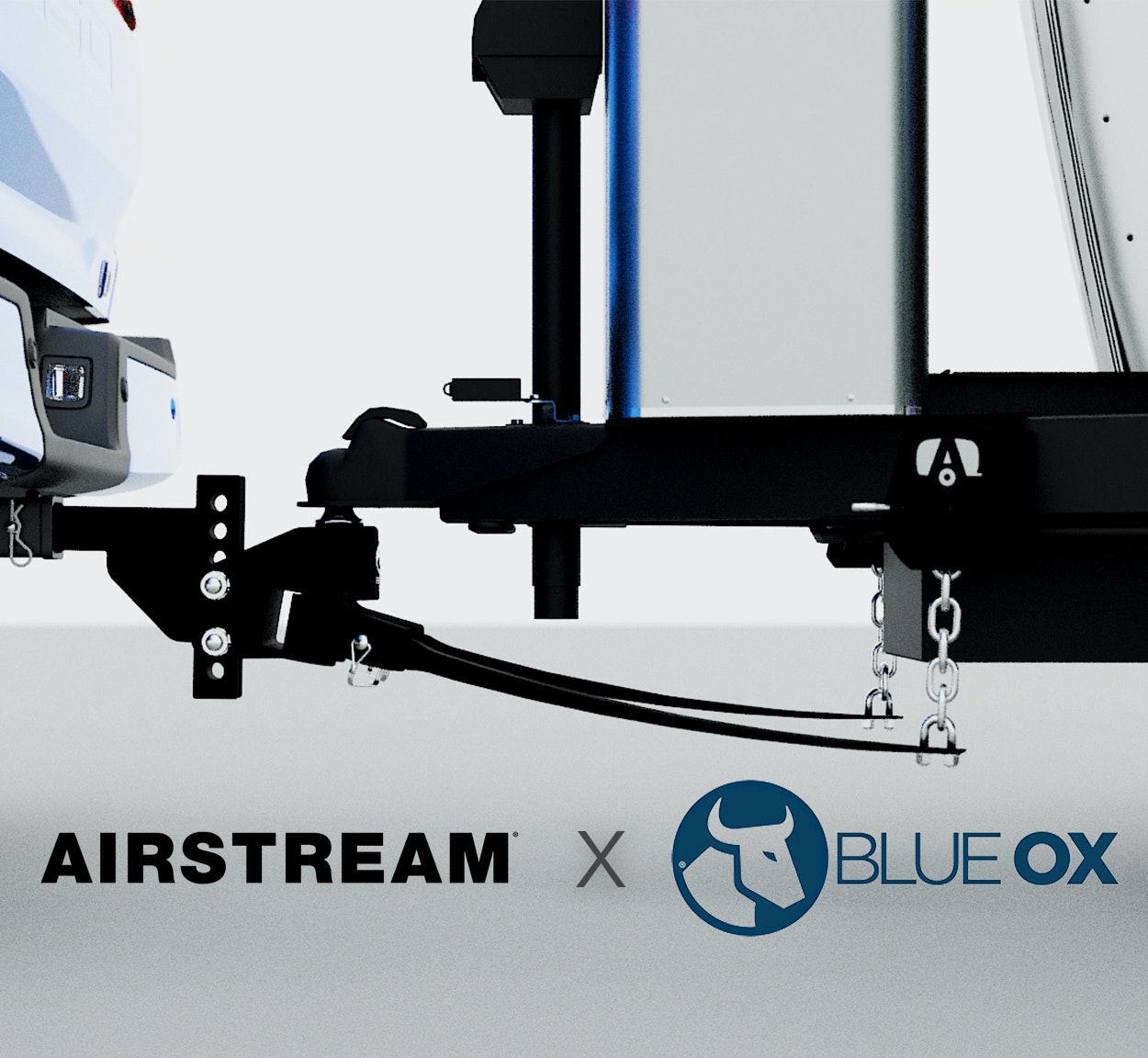 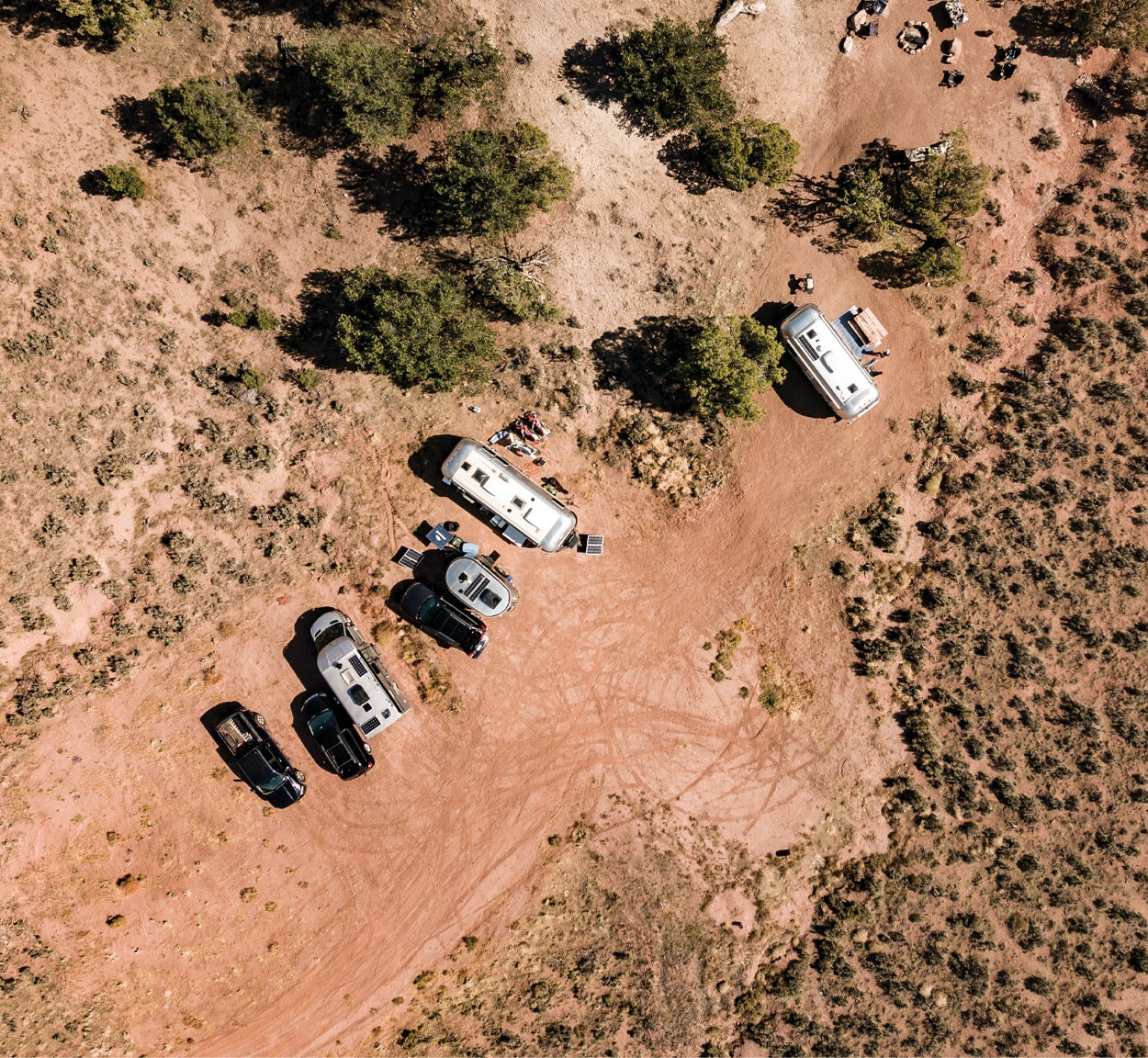 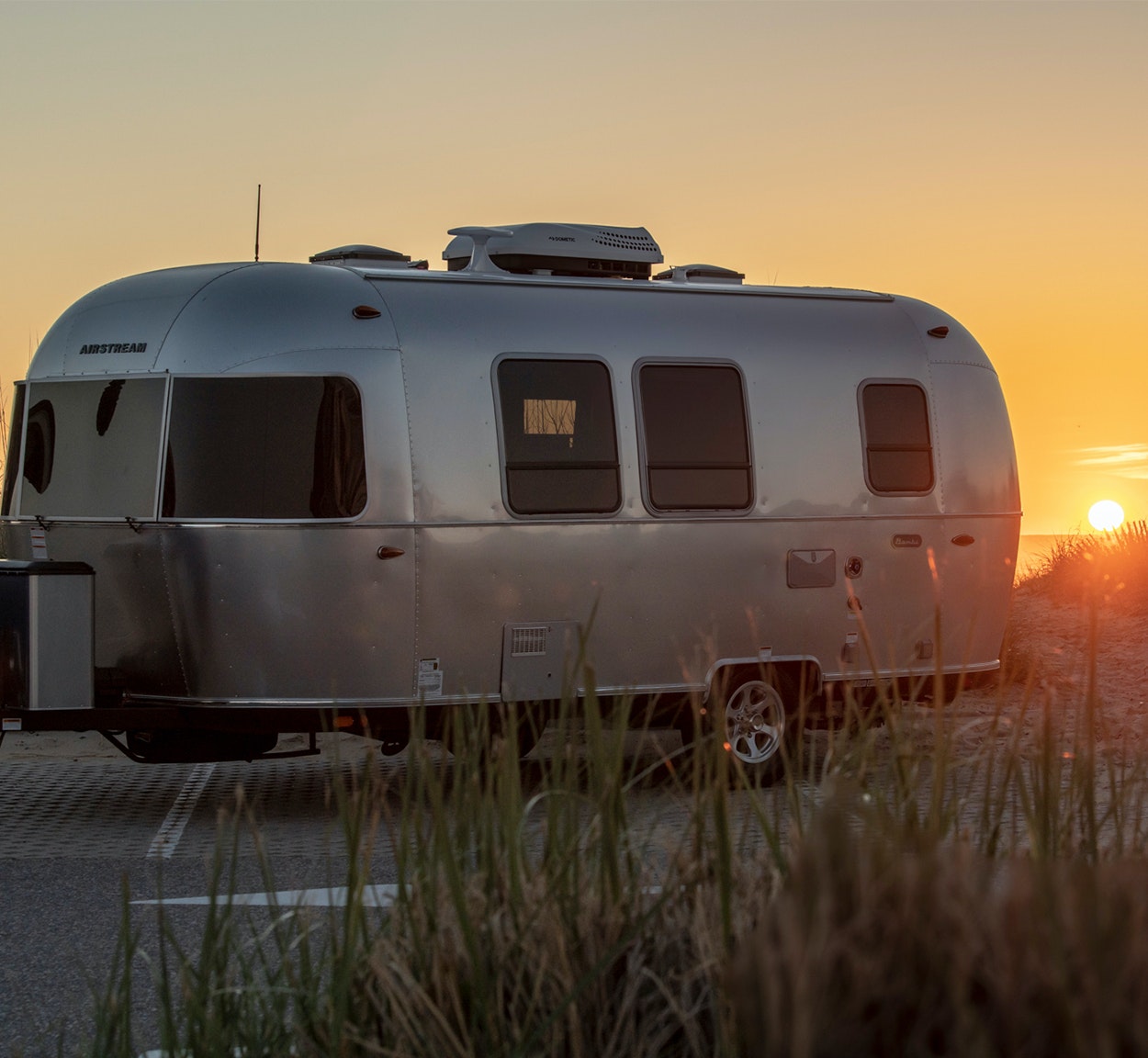 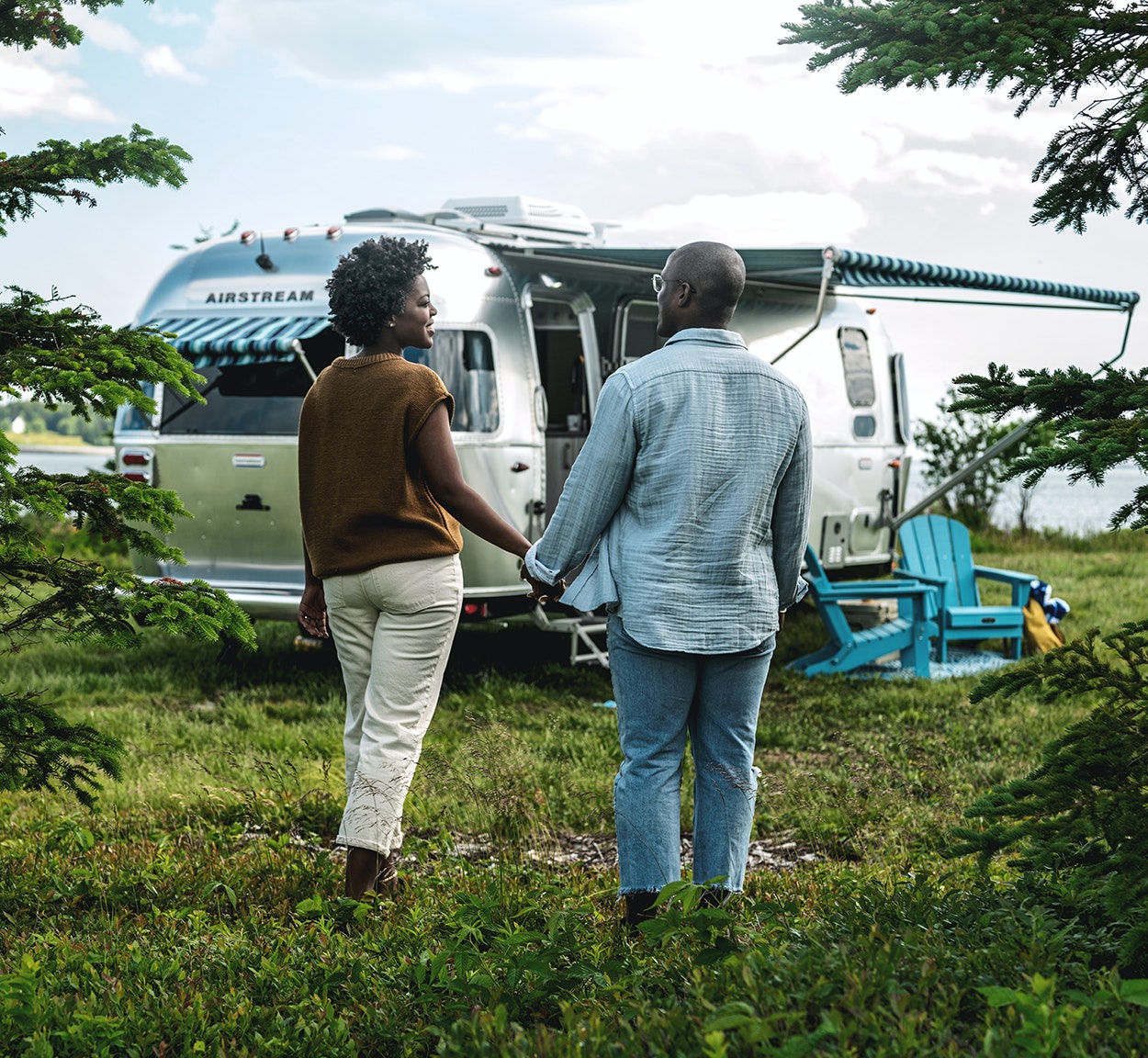 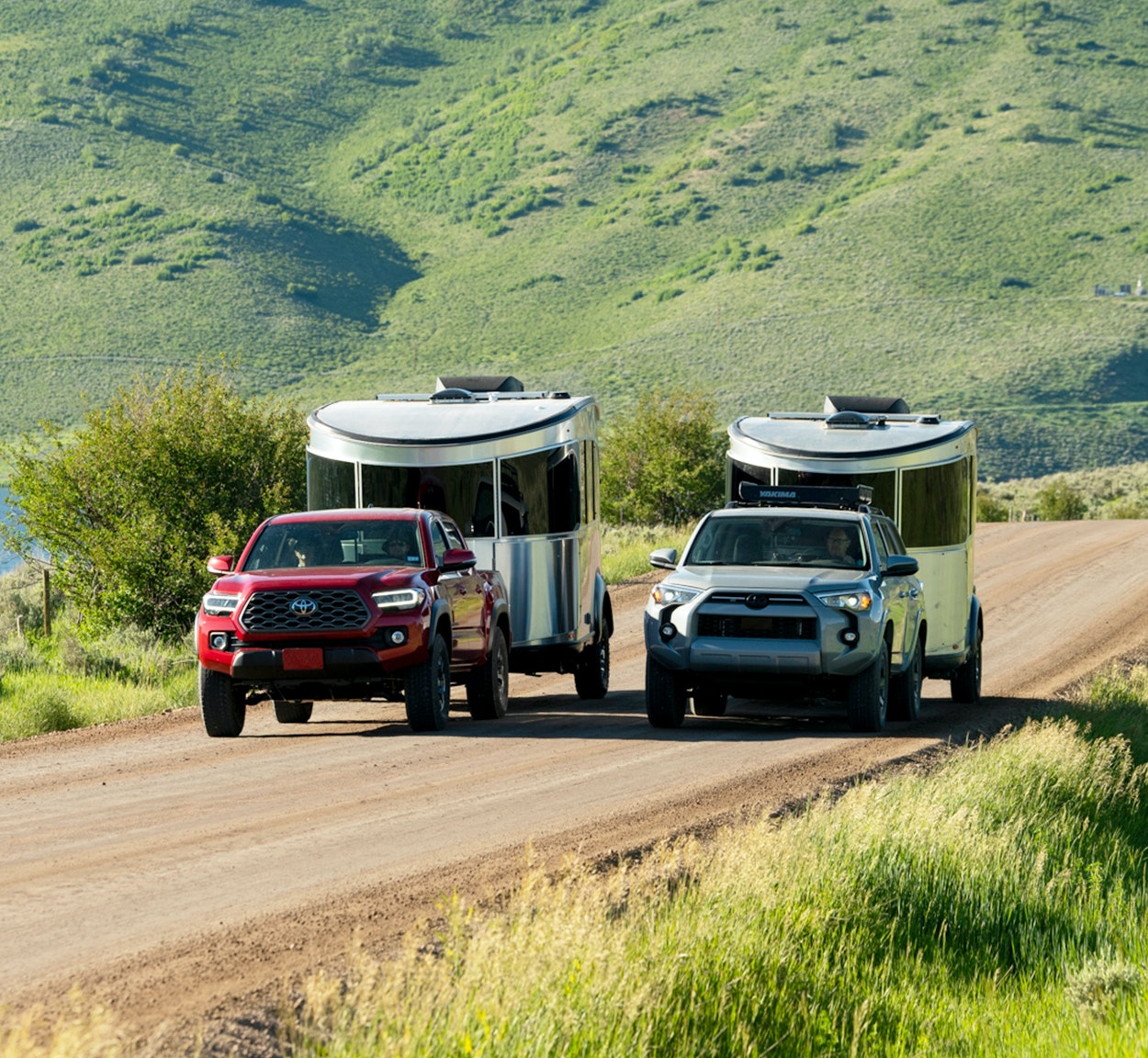 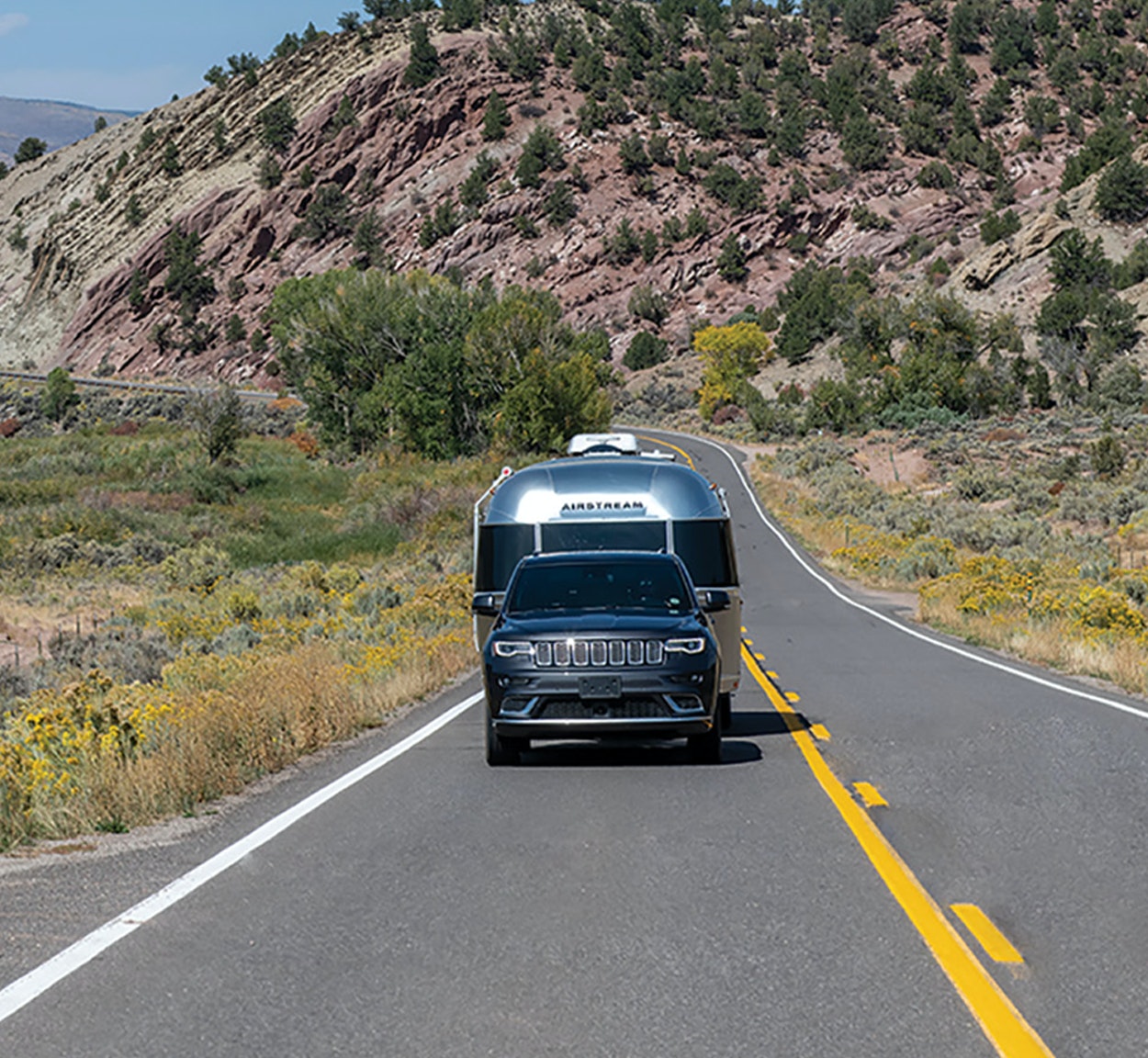 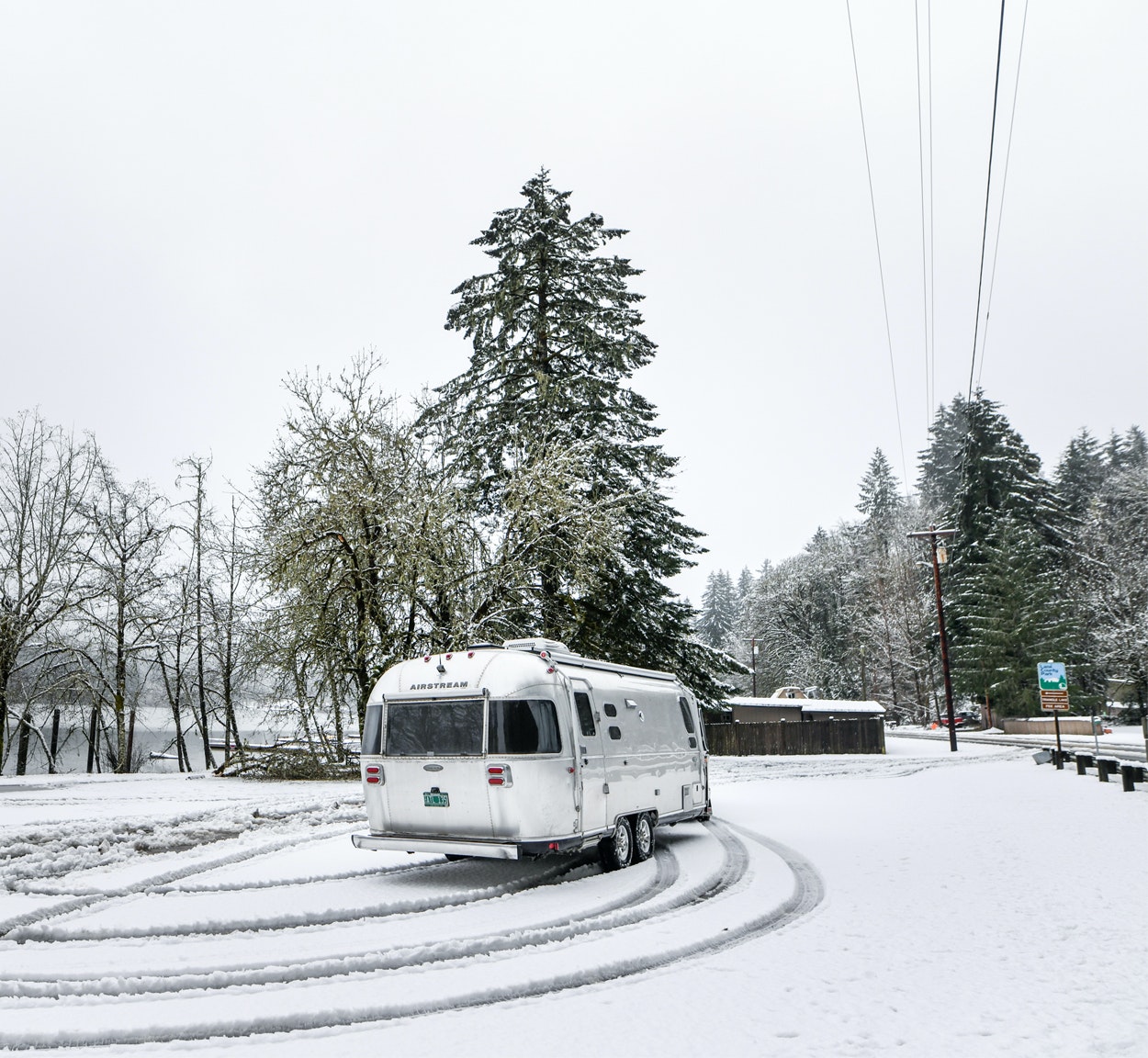 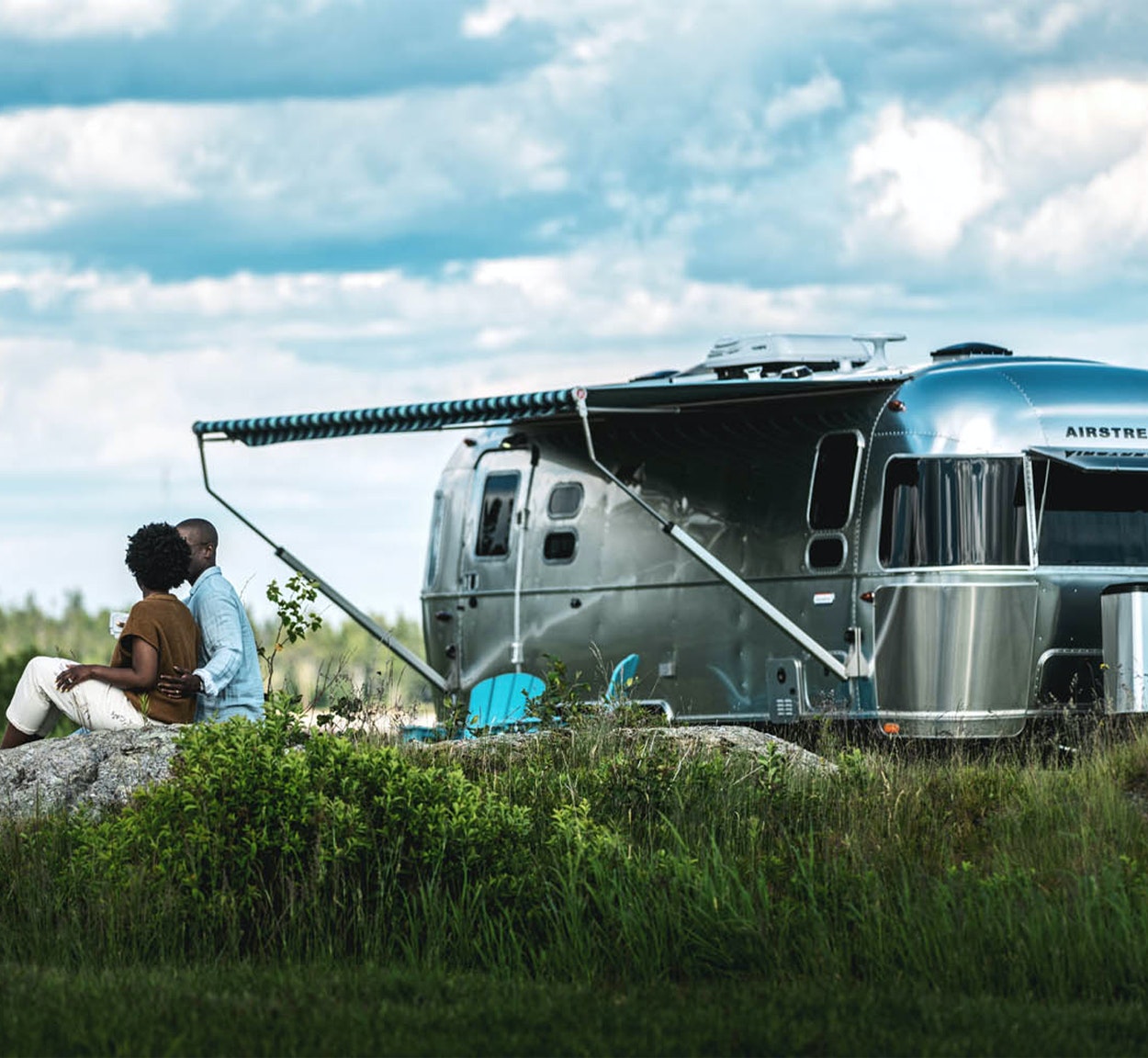