Years ago, I was asked to judge engineering presentations at Arizona State University. The students had been asked to plan, manage, and assemble their own Airstream African Caravan.

One ambitious group in particular I remember. They believed they could travel from Cape Town to Cairo in a period of just two months. The roads in Africa have improved since our historic voyage across the continent. But what we found in those days put us often in a precarious and dangerous position.

Let’s go back in time to 1959. The First Commandment of the Wally Byam Caravan: Thou shalt love thy fellow Caravanners as thyself and do all in thy power to aid and assist them.

Wally said, “Since this Caravan is going into rough country on an adventurous journey, we must realize each relies on his neighbor. We all must be ready, willing, and anxious to help each other in every way possible.” 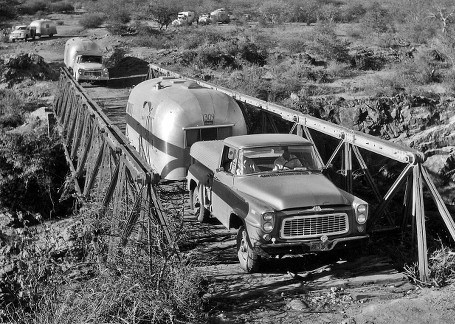 On our way through Kenya, we encountered everything from fully-paved roads to dirt paths. Most were in poor condition. A conflict with the British Authority only made things more difficult: they were unwilling to grant permission to travel through the Northern Frontier District. With no permit, our trip would come to an end.

Their explanation was simple: the fragile roads could be damaged during the East African rainy season, the ecology was vulnerable, and a group our size could make the highway impassable, requiring months of repairs.

Ultimately, our mission of goodwill continued, as Wally convinced them to grant our permits. But not without encountering some additional hazards. We knew, continuing on, that we’d run the risk of our Airstreams getting stuck in the mud, where they could stay for weeks. One grassy campsite was transformed overnight by torrential downpours into an axle-deep mud pit.

A few Airstreams made it out without getting bogged down, but the others had to be pulled out. Wally had thought ahead, outfitting the advance scout and mechanic’s trucks with power winches. A combination of four-wheel drive and pushing the Airstreams by hand got us back on the road. 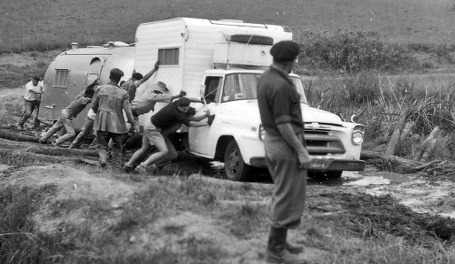 The Northern Frontier District was arid, its roads occasionally rough like driving on a washboard. Mile after mile, we kicked up clouds of silt-filled dust. Evenings through this dusty area required us to sweep the muck from the roads and from our vehicles.

We reached the Ethiopian border and found monsoons had devastated the roads between Kenya and Addis Ababa. They hadn’t been tended since World War II, when the British and South African armies had built a highway north to drive out the Italians from Ethiopia.

That meant we would have to fill in the deep beds of mud. We formed a bucket brigade. At one end, we filled buckets and trash cans, which were sent down the line and dumped into the muddy road tracks. Other Caravanners found limbs, bushes, and other items we could use to gain traction. This was difficult, backbreaking work.

The next challenge: the highways through Ethiopia were eroding. Miles of deep crevices split the roads, and to avoid falling through required the precision of a slalom skier avoiding a gate during a downhill run. At one point, the scout truck I was driving had just two wheels on the ground, precariously situated on the end of a deep crevasse. Four wheel drive was my salvation.

Unable to communicate or send word ahead, when we didn’t arrive in Addis Ababa on schedule, they feared the worst. The media heard we hadn’t completed our journey safely, and we made headlines as “The Lost Caravan.”

We faced every extreme imaginable when it came to navigating the roads of Africa. We’d been told there was no chance we could make it, with difficult terrain, weather hazards, and the challenge of towing Airstreams all the while.

Yet as Wally Byam put it during our celebration at the Nile Hilton in Cairo, “We dood it!”