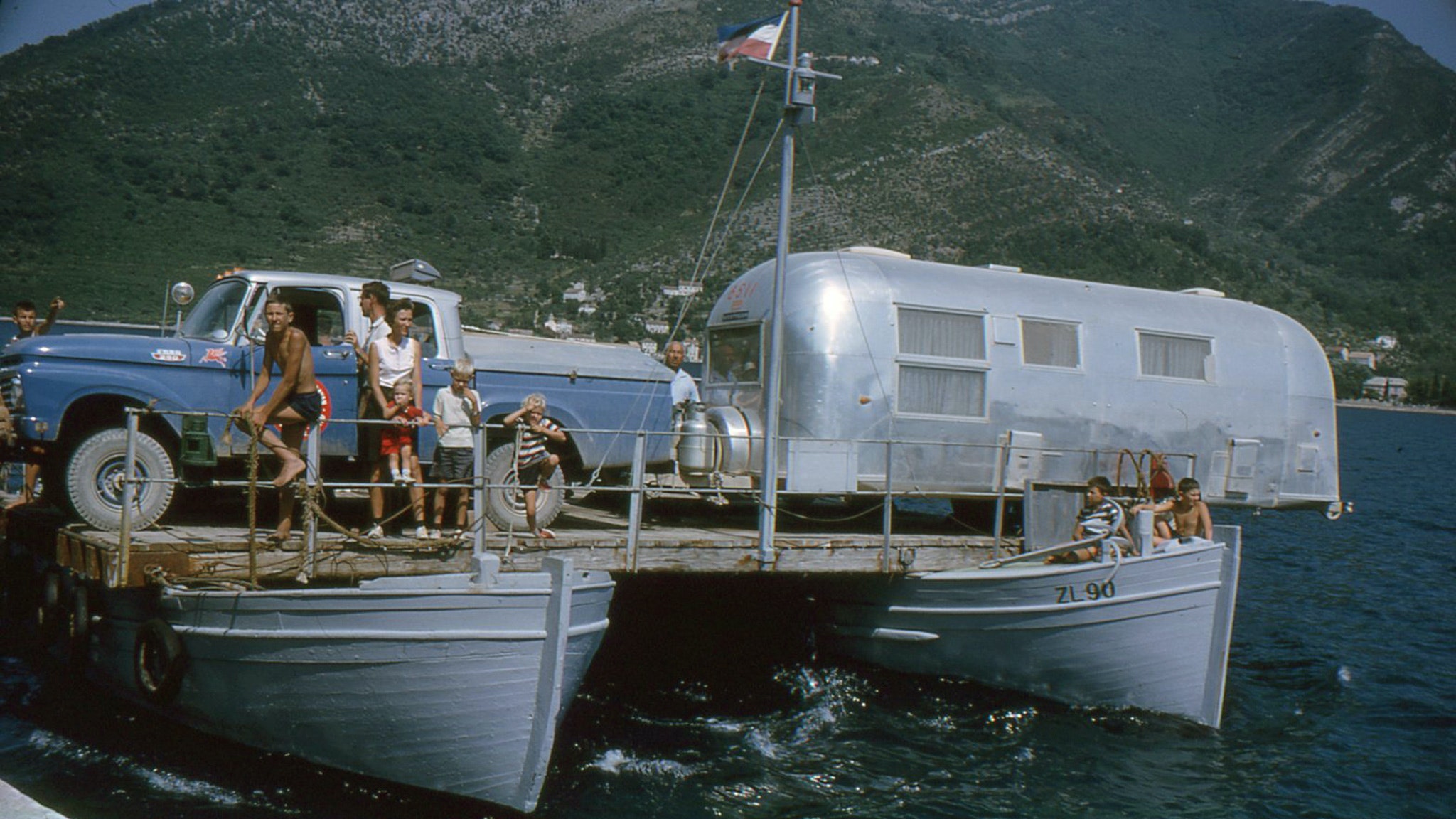 When journalist Mac Smith was hired as the correspondent on Airstream’s 1963-64 Around the World Caravan, he decided to bring his wife and three young children along for the ride. Almost 60 years later, the Smith Family recounted their time on Airstream’s most ambitious adventure to date – and how the experience shaped their lives forever.

Airstream's Around the World Caravan was truly the adventure of a lifetime: 105 people in 40-plus Airstream travel trailers covered over 31,000 miles and crossed through more than 30 countries. They traveled for 403 days from Singapore to Portugal. Journalist Mac Smith was hired by Airstream to document the trip and brought along his wife Jackie and their three children, Scott, Judy, and Lorie. Mac would go on to write an account of the Caravan in his book, Thank You, Marco Polo: The Story of the First Around-the-World Trailer Caravan. Almost 60 years later, the Smith family recounted their incredible travel experience and the indelible mark it made on each of their lives. Relive the Around the World Caravan through the eyes of the Smith family in our new video.

McGregor “Mac” Smith, Jr. was a journalist for the Miami Daily News when he applied to Airstream to be the correspondent for the Around the World Caravan. This Caravan had long been the dream of Airstream founder Wally Byam, but he passed away in 1962 without seeing his dream come to life. Wally’s friend and Airstream Chairman of the Board Andy Charles set out to lead the trip in his honor, while Airstream Club International leader Helen Byam Schwamborn set about planning the trip and working with local officials to ensure safe passage. Mac and Jackie were thrilled when they received the news that Mac had been awarded the job and looked forward to exploring the world with their young son Scott and daughter Judy.

However, the Caravan experienced some delays due to concerns from the State Department and other complications. And so, by the time the trip was set to take off, Mac and Jackie had welcomed their youngest daughter Lorie into their family. Concerned that this might prevent him from going on the trip, Mac reportedly called Andy Charles to discuss the situation. Andy asked how long Lorie was and when it was determined that she could fit inside the bathtub of the Airstream, it was decided that she could comfortably sleep there throughout the journey.

True adventurers, when the Smith family embarked on the Around the World Caravan, Scott was under 7, Judy was under 5, and Lorie was 9 months old. The family traveled in a 1963 26’ Airstream Overlander (BRN 8511). They would also be accompanied by Jackie’s parents, Buz and Millie Cordes (BRN 7305). 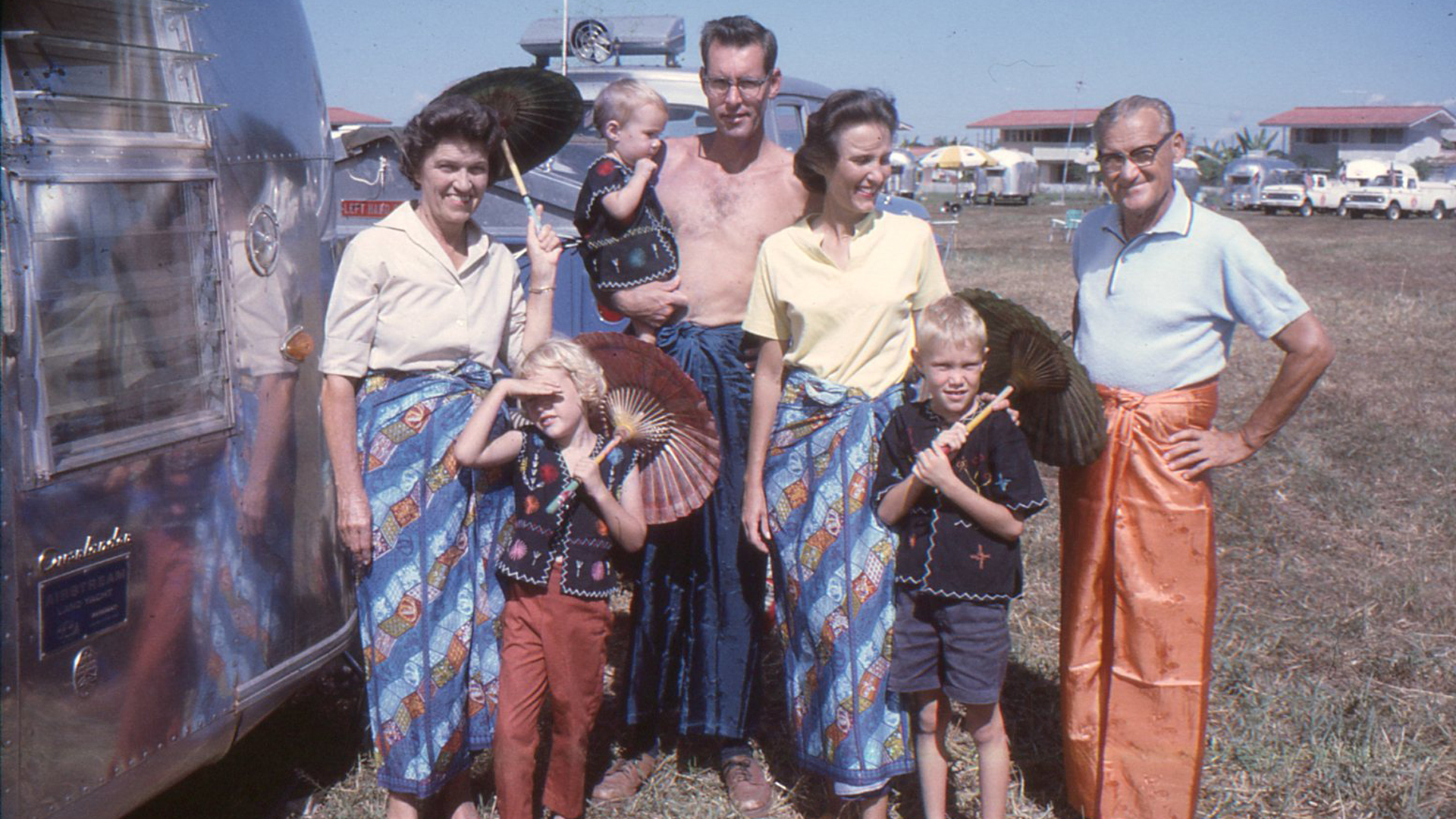 The group of 105 Caravanners arrived in Los Angeles in September of 1963 for the kick-off banquet. They then toured Hawaii, Japan, and Hong Kong via the S.S. President Cleveland before reuniting with their Airstreams in Singapore to officially begin the Caravan. From there they traveled through southern Asia, behind the Iron Curtain, and across Europe for the final ceremonies on October 31-November 1, 1964 in Portugal.

Throughout the trip, Mac wrote articles documenting the voyage for the Club’s newsletter The Caravanner, the Miami Daily News, and several other publications. After returning home, in 1966, he published a book about the journey titled Thank You, Marco Polo: The Story of the First Around-the-World Trailer Caravan. 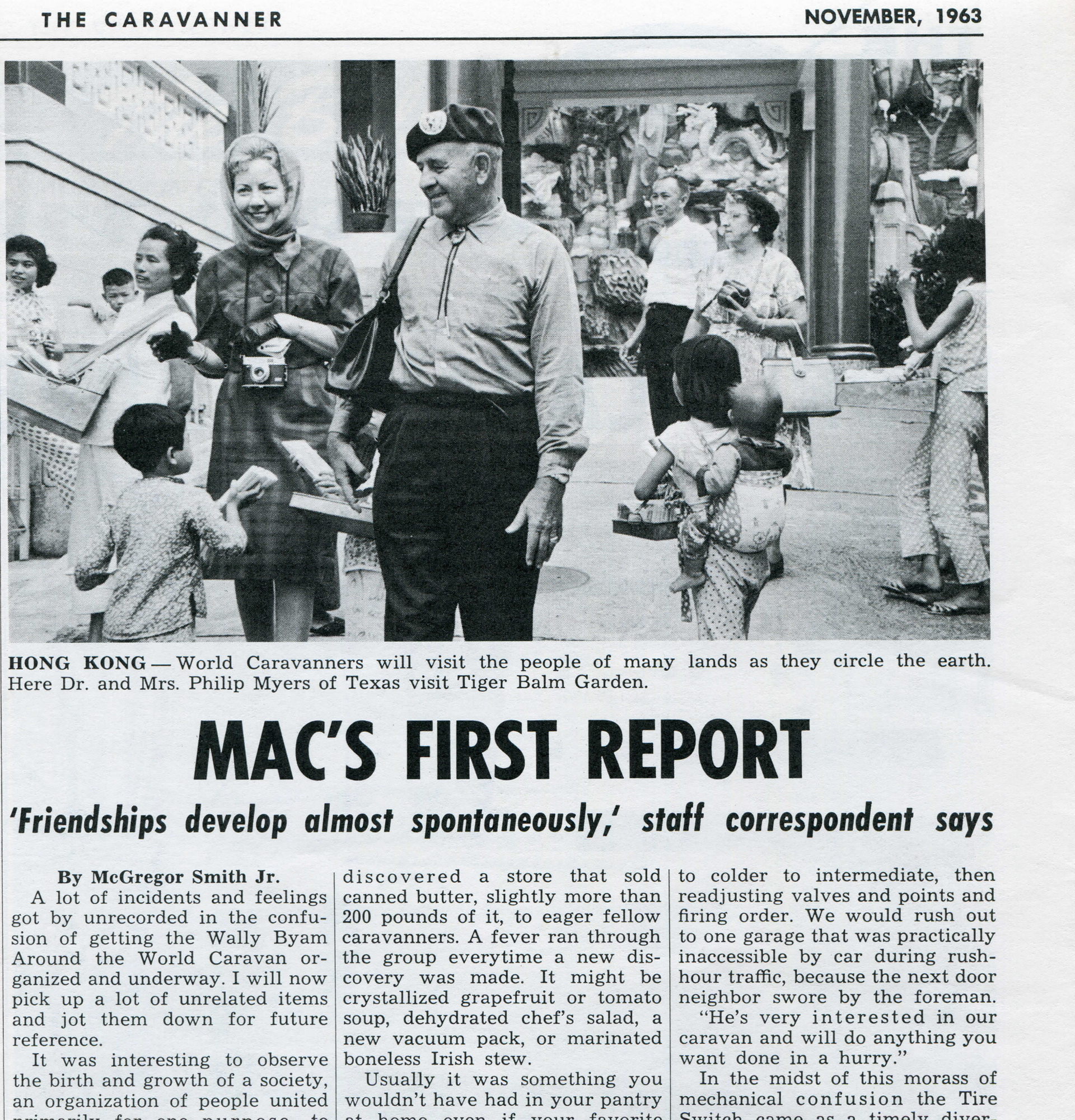 Sadly, Mac Smith passed away in 2018 at the age of 92 after a long and fulfilling life. We were fortunate to be able to visit Jackie, Scott, Judy, and Lorie in March of 2019. They welcomed us into their home to share their incredible story. We were truly inspired by the beautiful photos, home movies, and their recollections of the Caravan. It was clear that the Caravan had shaped their view of the world and brought them closer together as a family. 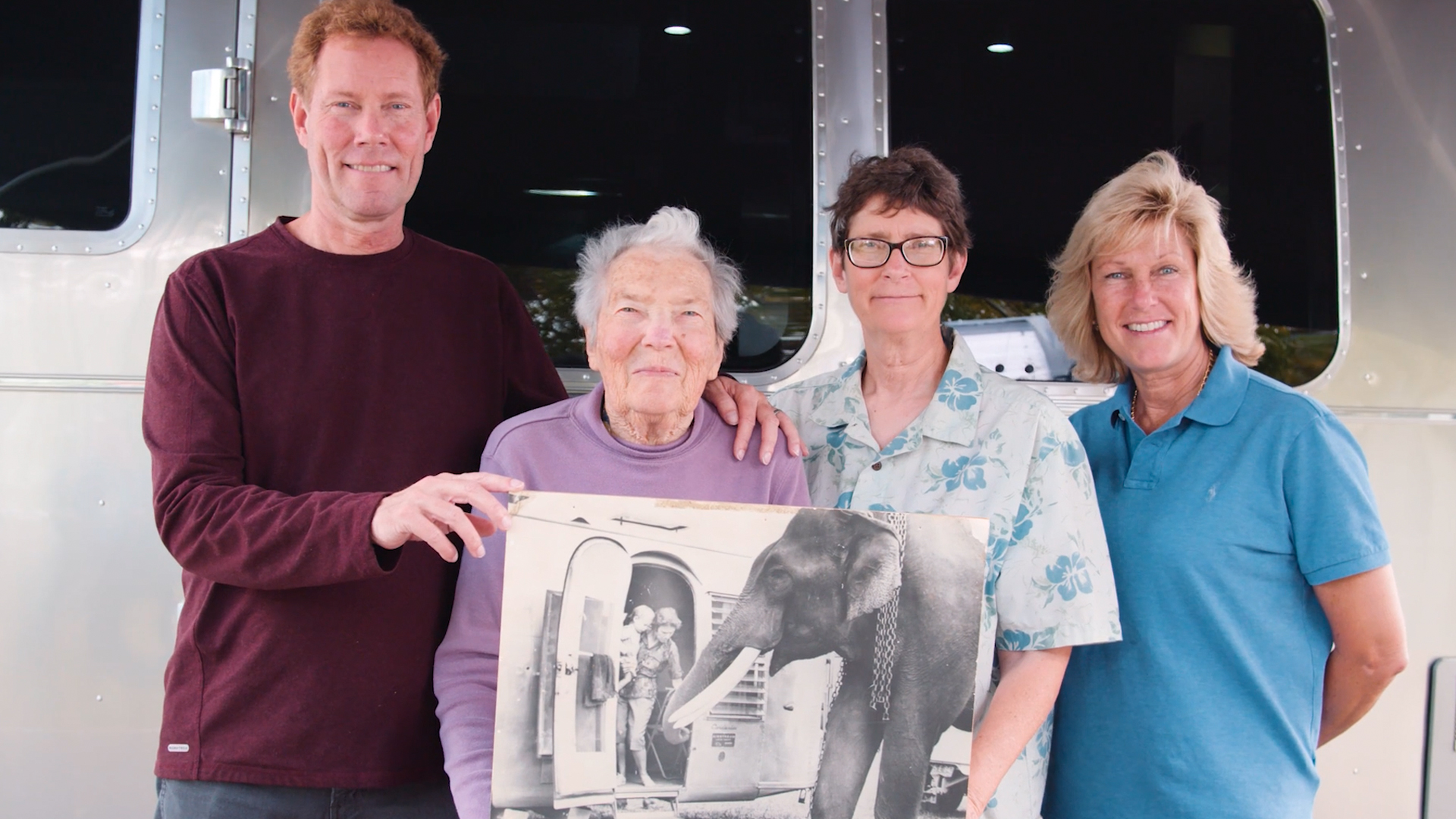 Their stories were simply breathtaking and revealed the venturesome spirit of Airstreamers. The Caravanners welcomed locals into their Airstream, explored Angkor Wat, visited the Taj Mahal and Roman ruins. They pulled their Airstreams through the mud, sourced fuel, and shopped for food and clothing at local markets.

Along the way, the Smith family and other Caravanners fulfilled Wally’s dream, “To play some part in promoting international goodwill and understanding among the peoples of the world through person-to-person contact.”

Perhaps Scott’s words capture it best: “It was the adventure of a lifetime, I’m so glad my parents did it. I say the thing that I brought with me for the rest of my life was a respect and care for the people of the world.” 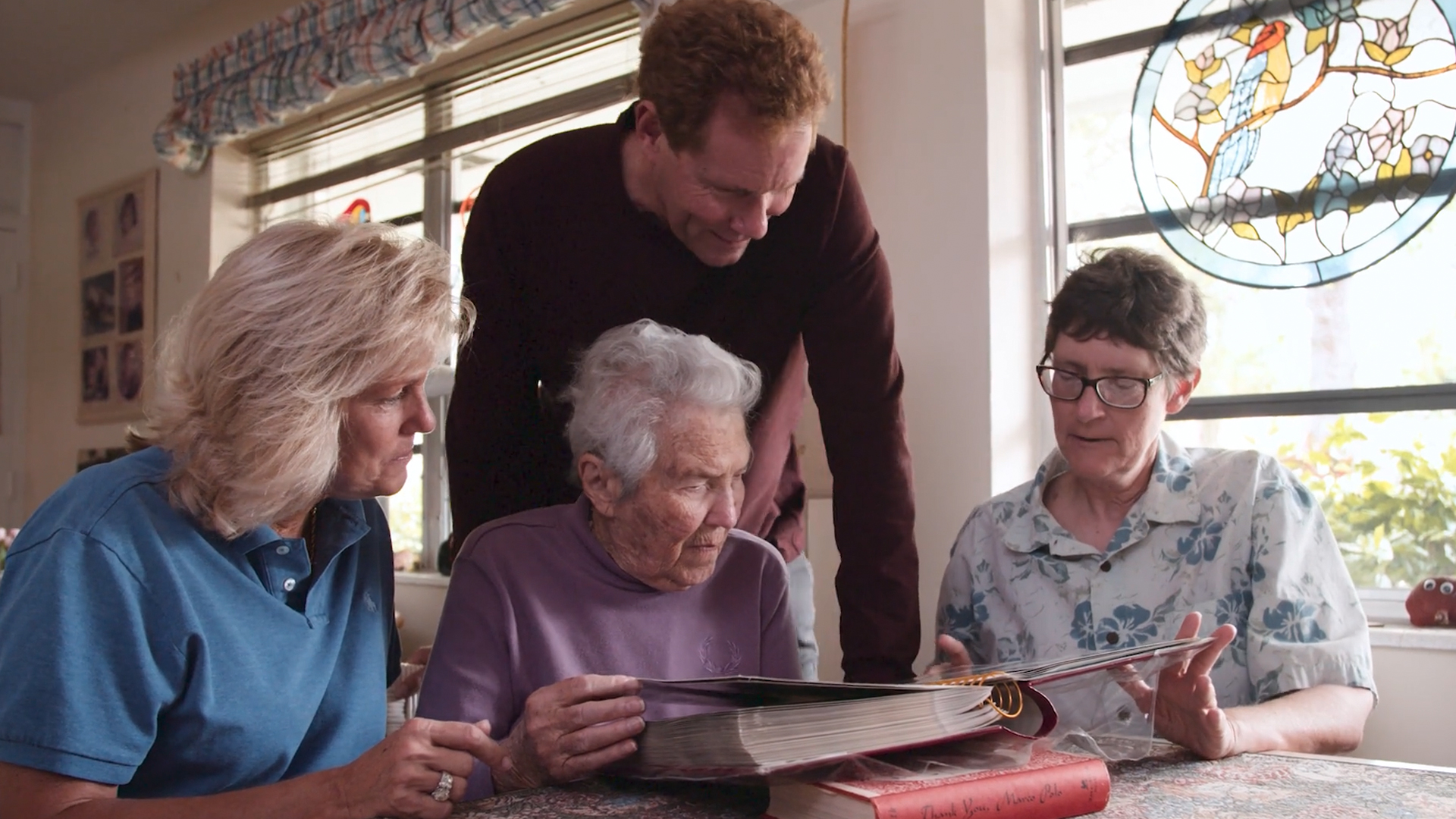 One of the things that made the trip so special for the Smiths was that they were able to experience it as a family. Although he was often asked if it was difficult to travel with such young children, Mac wrote in his book “And if we had one special thing in our favor, as we covered 30,000 miles and 31 countries, it was having our children with us…And unless we had had to chase them through the flower beds, how could we have lain on the ground to see the Taj Mahal through a garden of flowers?”

The story of the Smith family continues to inspire life-changing adventures and serves as a reminder of the power of people to people contact through travel. While not everyone can set off on an Airstream trip around the world, Airstreamers know that every time we hitch up we do so with the same sense of freedom and adventure. New horizons are waiting – where will you explore next?

Experience the Around the World Caravan in person at the new Airstream Heritage Center in Jackson Center, Ohio. Vintage travel trailers that participated in the Caravan, artifacts, memorabilia, and more await you at the Mothership – plan your visit today!