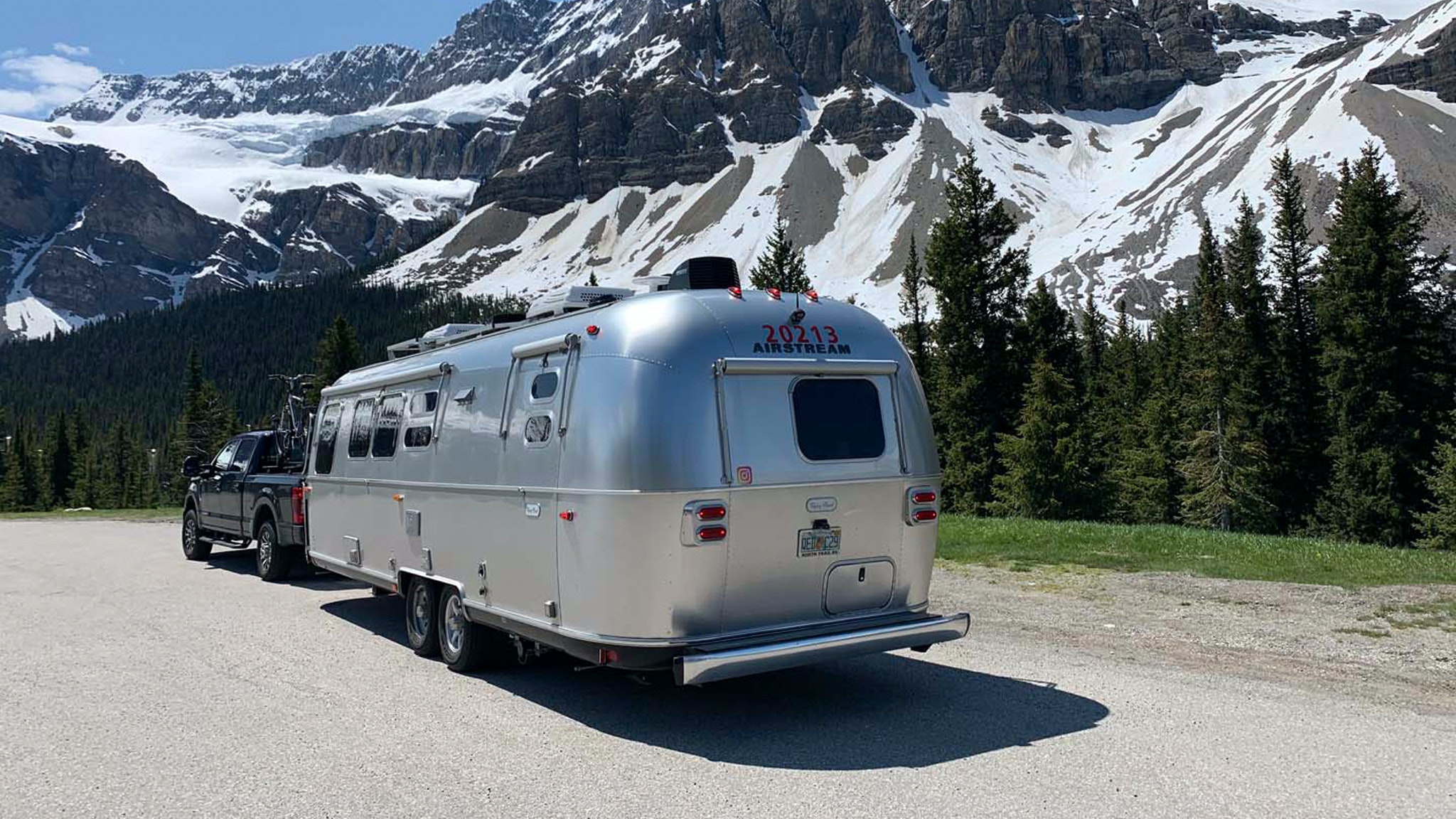 Recently featured in a Wall Street Journal article about full-time RVers who have flourished in the era of Work from Anywhere, Scott and Kim Hamilton are making the most of the mobile lifestyle in their Airstream Flying Cloud 30FB Office.

There’s little doubt that Scott Hamilton is a phenomenal business consultant to financial professionals. But since he and Kim sold everything and began living full-time in their Airstream Flying Cloud 30FB Office, Scott also has been able to advise on something his clients are equally eager to learn about: work-life balance…with the scales tipping toward life.

Scott worked in tax law for decades, while he and Kim, a former business owner, raised their four kids in the suburbs of Chicago. Though he worked from home, he was gone quite a bit for work.  And it wasn’t the fun kind of gone.

“Once the kids left, it’s like, do I really want to keep traveling around like this?” Scott says. 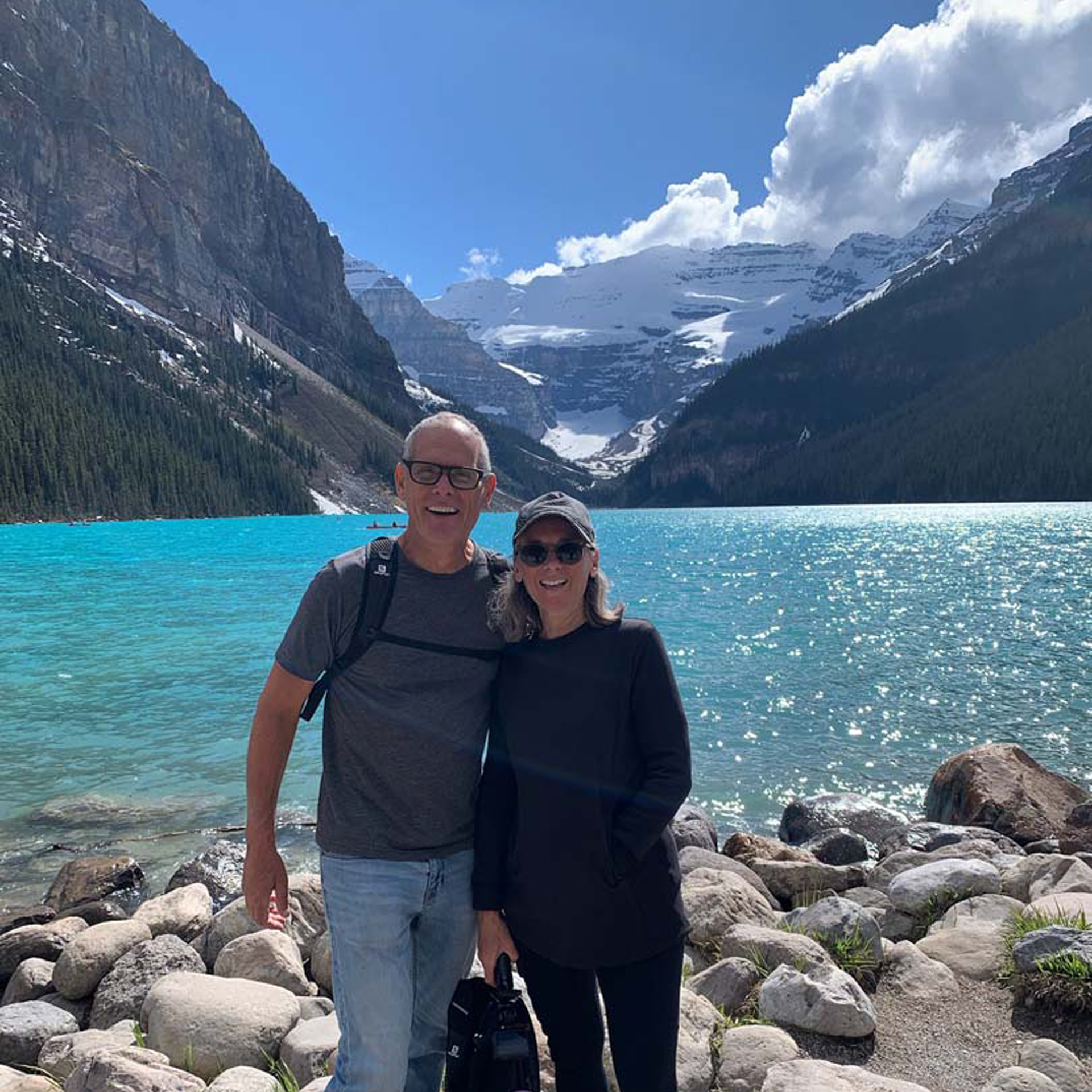 So, about five years ago when the opportunity arose to join a business systems group as a consultant, he jumped at the chance to work from home and stay home. And then, as it did for so many, COVID upended their plans. A part-time musician, Scott found his social outlet disappear on lockdown. Kim had sold her business by then as well. “We felt kind of trapped,” Kim says.

Their daughter, who lives in Chicago with her family, owns a 30-foot Flying Cloud Bunk. “We bought a travel trailer from another brand just to place in a campground in southern Michigan, so we could be near them in the summer and get out of the house because of COVID,” Kim said.

But they decided that if their kids owned an Airstream, they probably should too. “At the end of the summer we decided to jump in and see what the Airstream lifestyle was all about,” Kim said. “So we put an order in.”

From Home Office to Full-Time Home on the Road

Kim and Scott first chose a Basecamp, but ended up taking home a 25-foot Flying Cloud. But manning two kinds of keyboards — piano and computer — requires some extra space. So, they scoured the internet and landed their ultimate ticket to freedom: a 30-foot Flying Cloud Office. 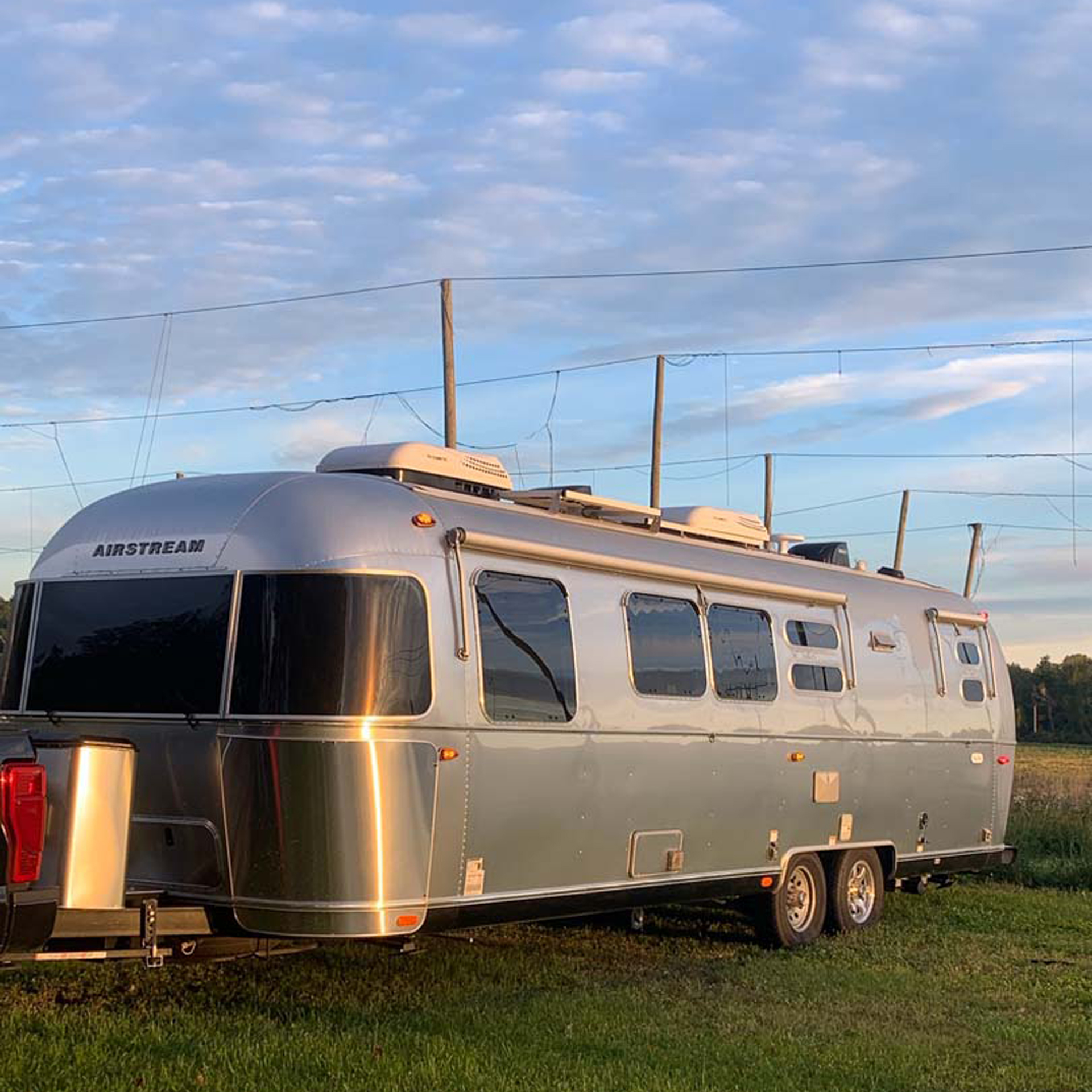 It’s not only a home office — now it’s also simply home. The Hamiltons had already downsized once when their kids went off to college, from a 4,500-square-foot home to a 1,100-square-foot condo. But they loved life on the road so much that they soon sold that condo in Chicago too, along with almost everything in it. They have one small storage unit with some artwork that they couldn’t part with; the rest of their belongings, as well as their real estate, is gone.

“Which is funny, because now we’re back to traveling full-time,” Scott says. “The thing that I was getting away from – we’re now doing all the time.”

But this is a much different kind of travel, of course. “We really get to go to some amazing places,” Scott says.

“We left on March 15, 2021, and we never looked back,” Kim says. “The Office edition has done an amazing job giving us everything we wanted: space, the ability for him to work on Zoom calls and also write and play music as a side hobby.” 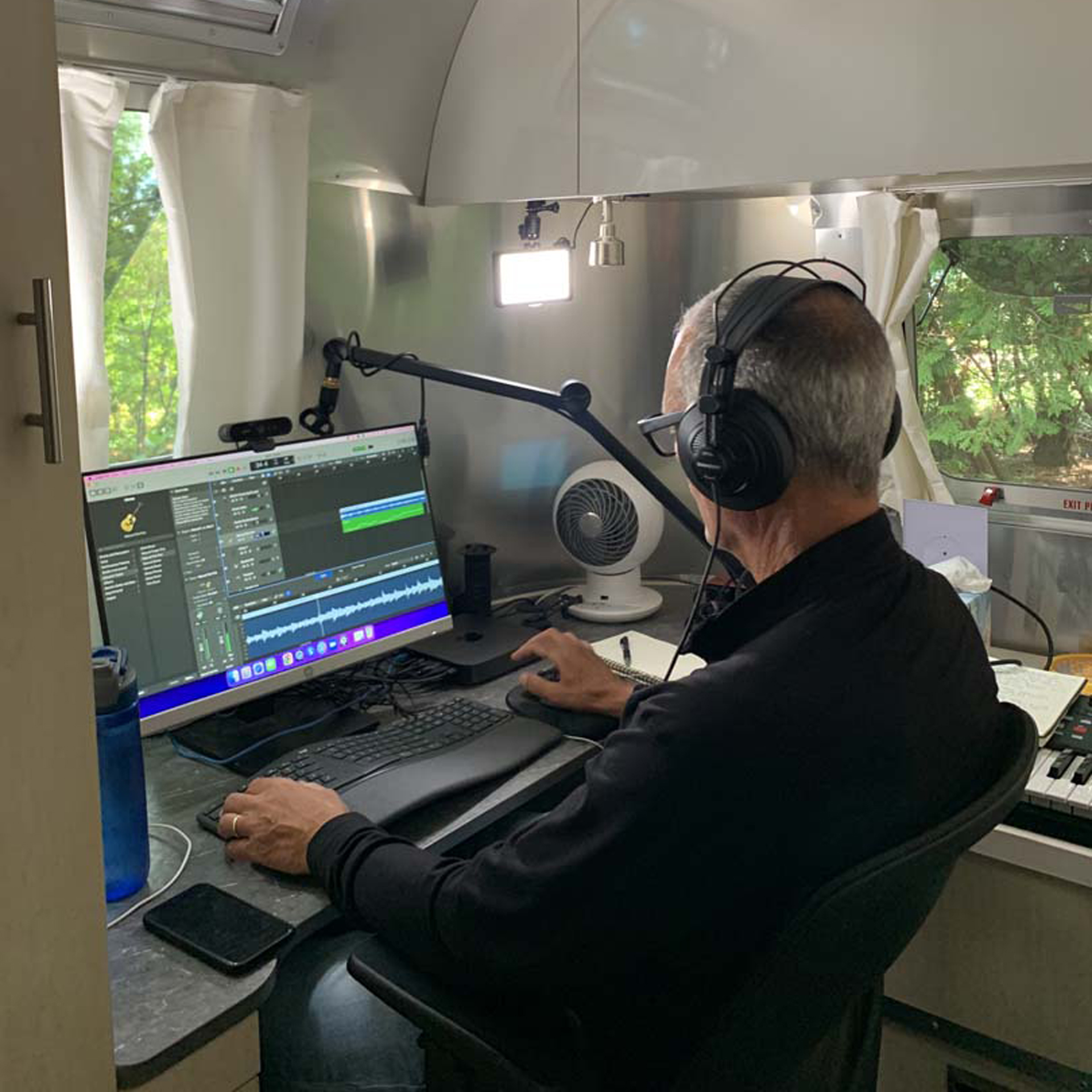 Scott may have been well ahead of the work-from-home trend, so he already could appreciate the importance of a good ergonomic chair. But one of his favorite aspects of the work-from-RV lifestyle is the ability in the Office setup to close the door at the end of the workday and walk away.

“When you have your own space, you know, everything's there,” Scott says. “And you don't have to clear it out at night. That's pretty cool.

“The difference between 25 feet and 30 feet is really significant,” says Scott. “It's a much bigger difference than I would ever expect. There's just way more cabinetry and places to put things. They did a really, really good job in designing this unit.”

He’s tweaked it a bit to house all of his gear. They took out the cushions on the convertible bed in the office space and turned that into a platform for his piano keyboard. He houses a printer in one of the drop-down drawers. There’s a saxophone and guitar tucked away in there as well. And he’s managed to hide the wiring for their Insty Connect and Starlink, the two services that allow him to stay connected wherever they go. 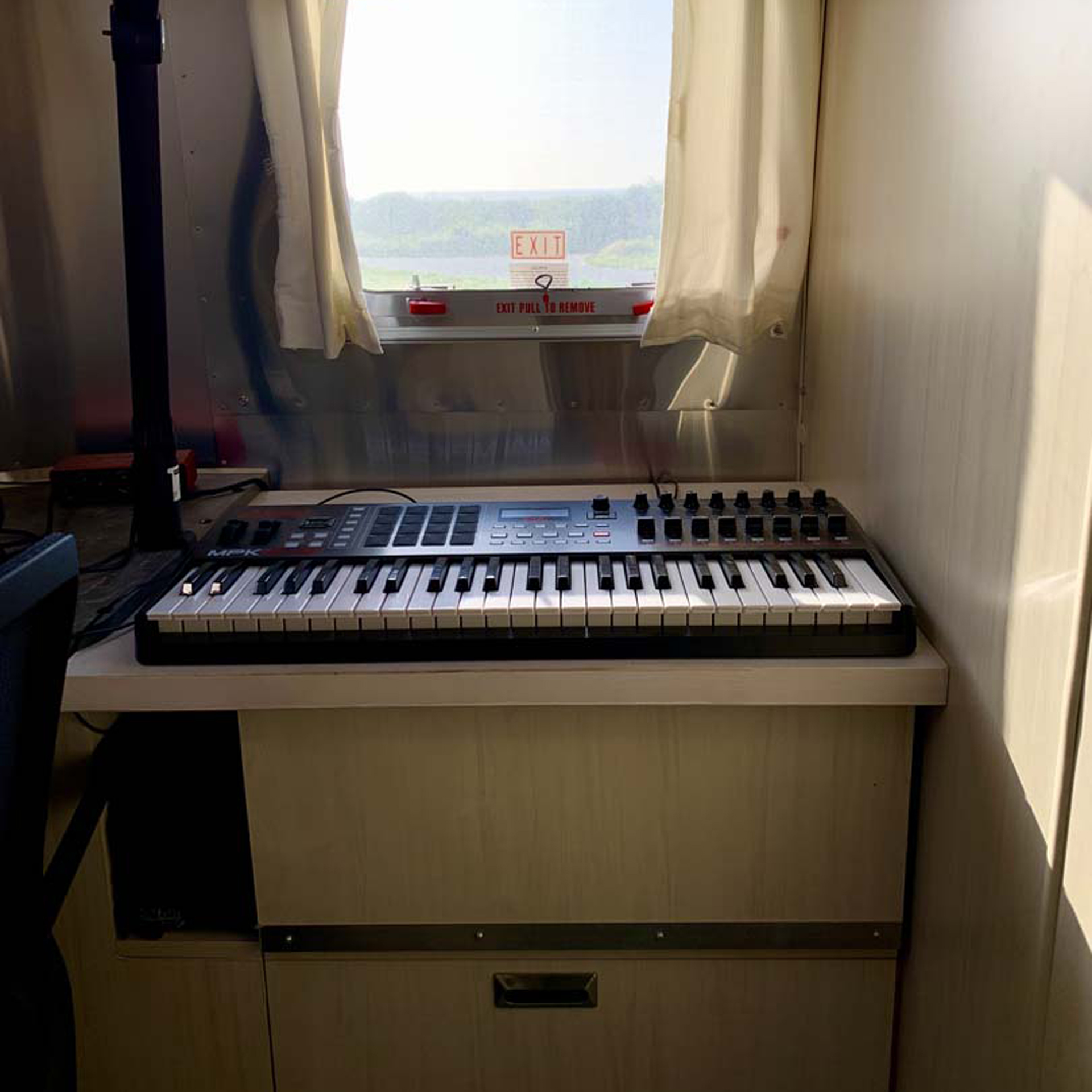 With the cellular support of Insty Connect and the satellite power of Starlink, Scott and Kim can camp out nearly anywhere in the country, whether that be a state park, a US Army Corps of Engineers Campground, a private campground, BLM, or a Harvest Host location, where Kim often lines up gigs for Scott to play for fellow travelers in the evenings.

It may have required quite a bit of purging and a significant learning curve, but Scott and Kim have crafted a routine of sorts that makes them the envy of friends and clients. Scott’s making music and works three days a week making money while the pair is making memories in some of the most beautiful places in the country.

Using the RV LIFE Trip Wizard, every year between October and November for the last two years Kim has been planning trips that would give Scott the opportunity to work Tuesday, Wednesday and Thursday in one spot. 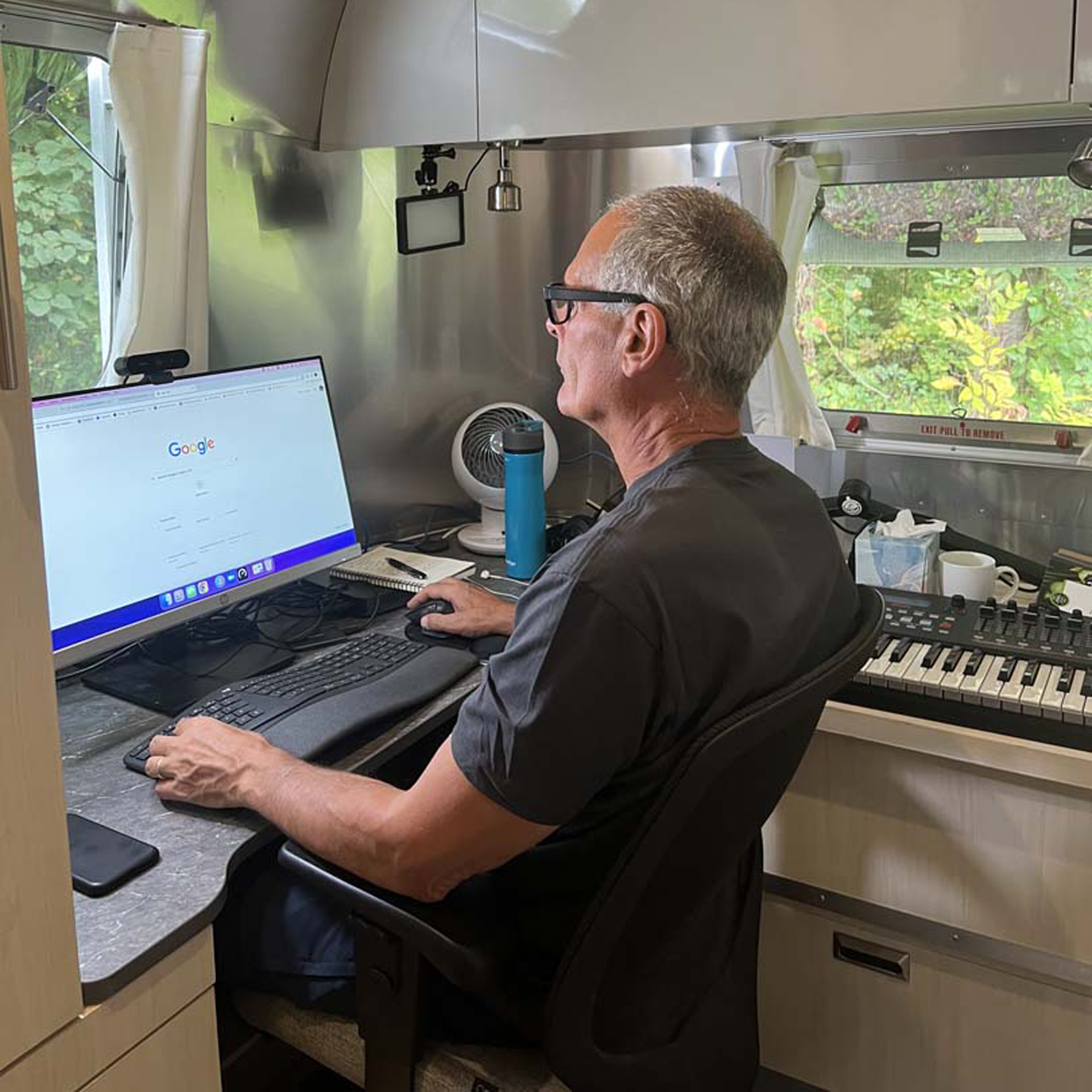 “And then the other four days, Friday, Saturday, Sunday and Monday, we're able to make one of those the travel day and then spend the whole weekend up until Monday night going hiking, biking, etc. It gives us a huge amount of flexibility,” Kim said. “I’ve been picking places where I feel we could get the least amount of crowds while getting to see some of the most spectacular landscape in the country.”

Routines, Spontaneity, and Enjoying the Flow of Life

While they have a routine for their weeks, their seasonal excursions have more of an ebb and flow. They like to spend summers in southern Michigan, and parts of the winter in Florida; in the off-season they then set sail for more distant destinations. Recently they started in southern Arizona and drove north to make the iconic drive up the Pacific Coast Highway, spending four weeks in Oregon and three weeks in Washington State, eventually crossing into Canada. Scott and Kim still spend two weeks to a month each year in various parts of Europe as well, and they carve out time to care for and travel with their grandkids.

“I think the other thing that's pretty enlightening about what we've done in at least the last half of this trip is we've been able to see Scott's clients face to face, and we've been able to camp near them and drive into a major city and have dinner with them,” Kim says. 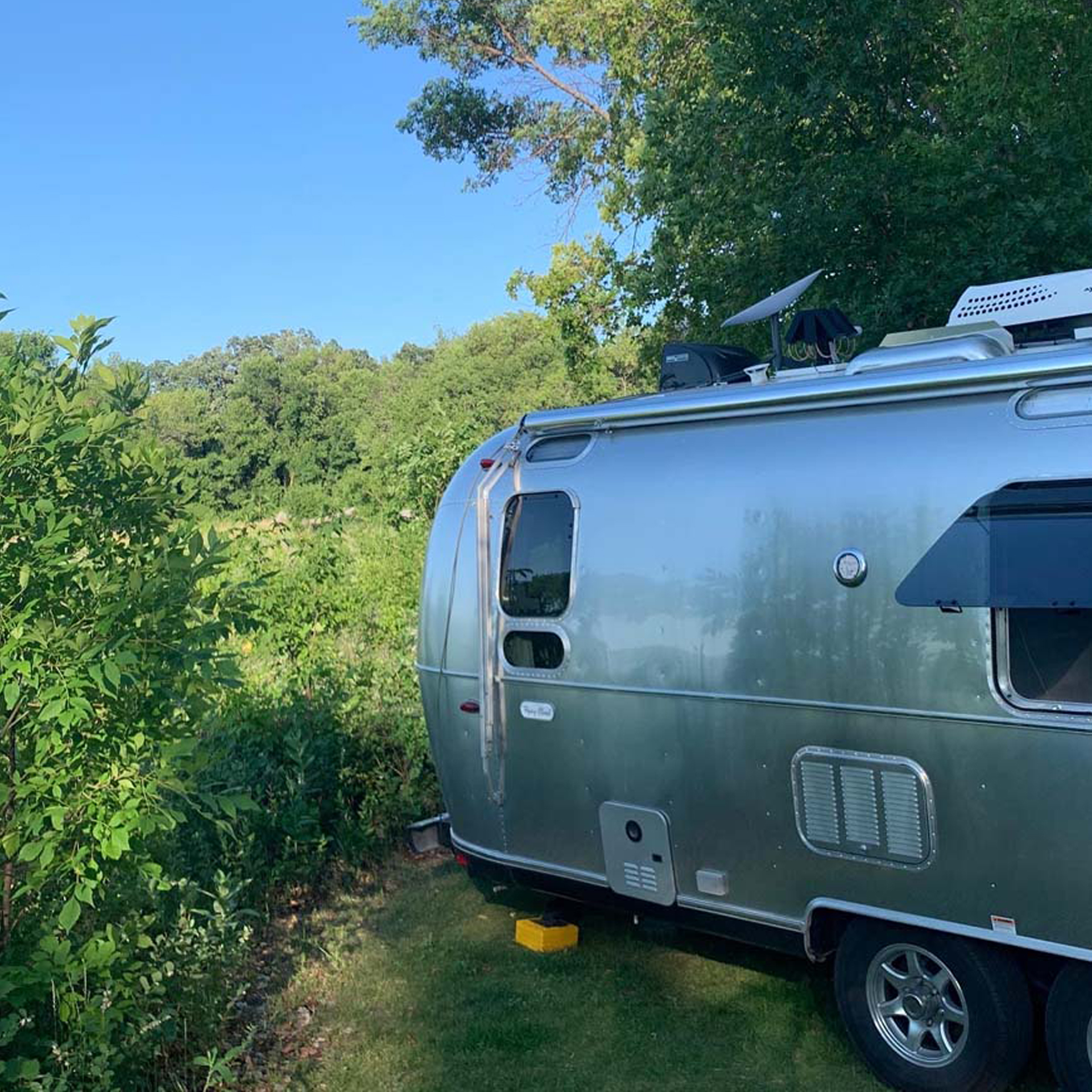 “And they've gotten to see a personal side of Scott that they weren't able to see before which has been, I think incredible. I’m listening to these calls all day — ‘Where are you this week, where are you now, what are you doing this week, where have you been?’ A lot of these people are in very high-intensity jobs in the financial services world, especially these teams that he coaches. They're always in acquisition mode. And for them to see what we’re doing and to help them become so much more successful … It's almost like well, why can't I do that?

“Scott is now holding their feet to the fire: You can be so much more productive, but you're gonna lose out if you don't take this part of your life and exercise your options to actually take a step back and enjoy it.”

Thanks to Scott’s expert advice and lived inspiration, one of his clients took their first vacation ever. Another one went out and bought an RV.

“It's just had a very positive spin not only in our lives, but also the people that he's working with and coaching,” says Kim. “You're giving them this extra piece of value that no other coach is able to provide.”

When you’re coaching people who have already achieved such a high level of success, some might find it difficult to guide them to yet more lofty aspirations. But not Scott.

“At least once a week someone says to me, I want your life,” he says.