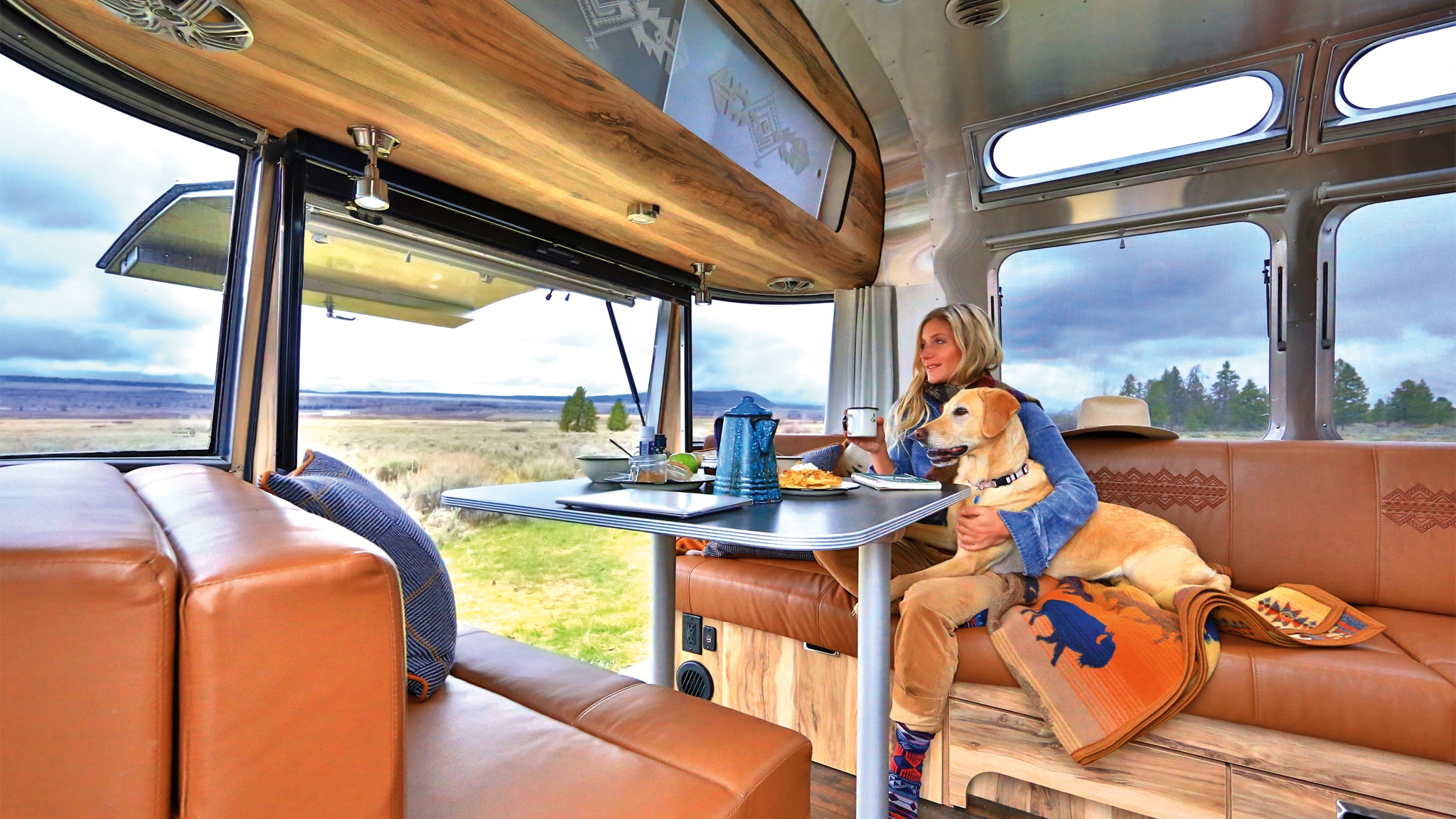 Some of the most specialized, sought-after, and spectacular Airstreams produced over the last 90 years have been given "special” or “limited” edition badges. We dug into the archives for a deep dive into spotting these extraordinary editions in the wild.

More than simply a recreational vehicle, an Airstream is a symbol of freedom, adventure, and ingenuity: An American icon blazing new trails into the 21st Century. But while legacy is a strong foundation, resting on laurels can result in a slow fade into obscurity. Countless companies and brands faded from view while Airstream thrived and grew over the last 90 years, testament to our founder, Wally Byam, who built innovation into the very fabric of his business. Wally demanded that his products only be improved – never simply changed for the sake of newness – and that tradition has continued forward to today.

As Airstream rounded the corner on the new millennium, special attention was paid to exploring new ideas for a new era. With the iconic riveted aluminum shell cemented in the visual lexicon of American design, Airstream opened up the design process to partner brands who shared a design aesthetic, a dedication to adventure, and curiosity about new experiences.

On the occasion of the launch of our most recent brand partnership – the all-new Airstream Pottery Barn Special Edition – it’s a great time to dive deep into these past partnerships. Whether well-known and common in campgrounds and at rallies, or just one from a limited production run, these Special Edition Travel Trailers were born out of a desire to work with like-minded brands who could bring something special to the Airstream legacy.

Pottery Barn: The Newest Member of the Fleet (2021)

A gorgeous blend of two iconic brands with more than 160 years of design expertise between them, the all new 28-foot Pottery Barn Special Edition Travel Trailer is just the latest in a long line of strong brand partnerships. Years of planning, brainstorming, and collaboration – including two sets of Airstream-themed Pottery Barn housewares (available at Airstream Supply Company and PotteryBarn.com) – came together to help write a new chapter in Airstream’s long history of design innovation. It’s a gorgeous travel trailer made for the modern road trip. 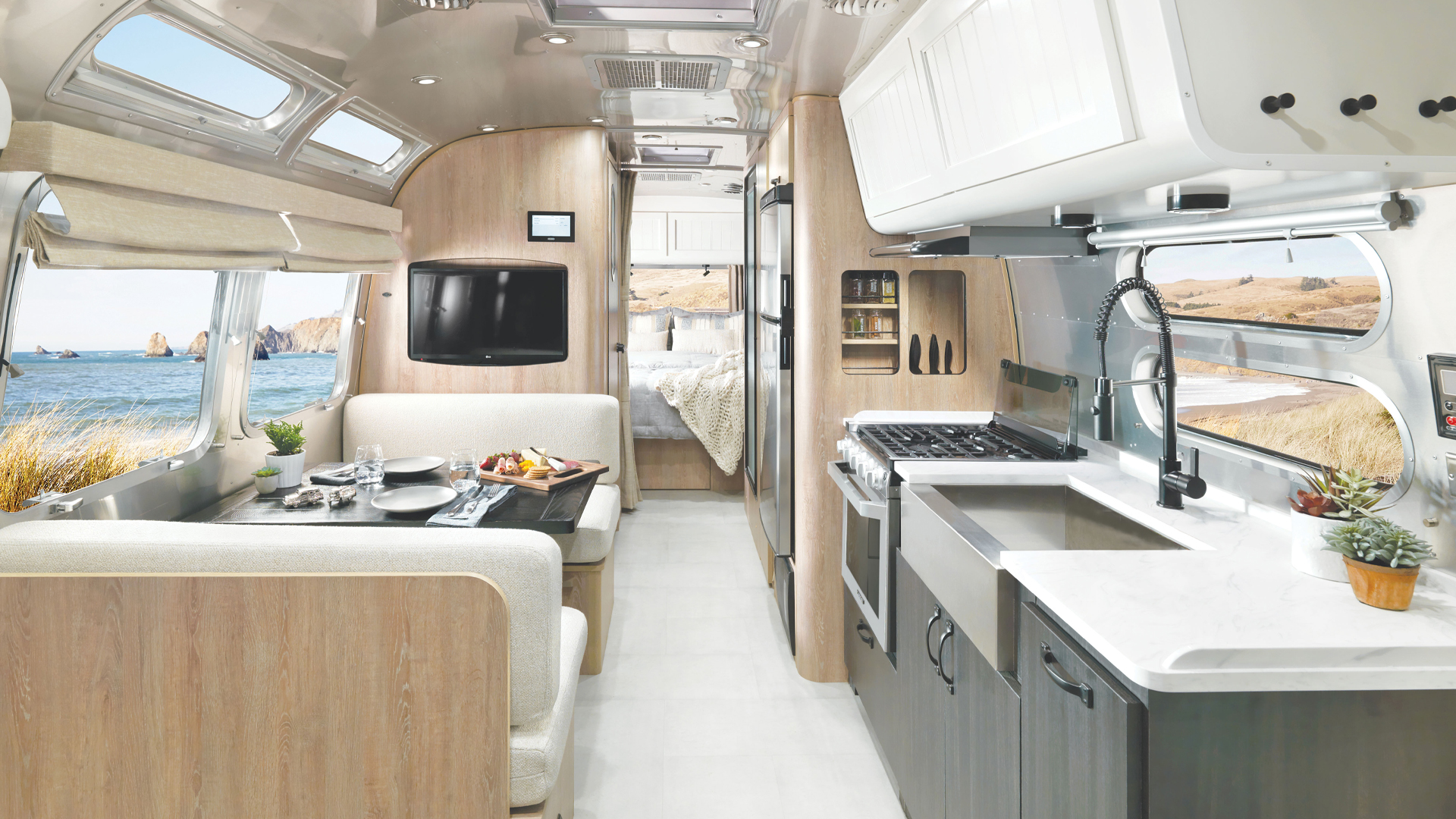 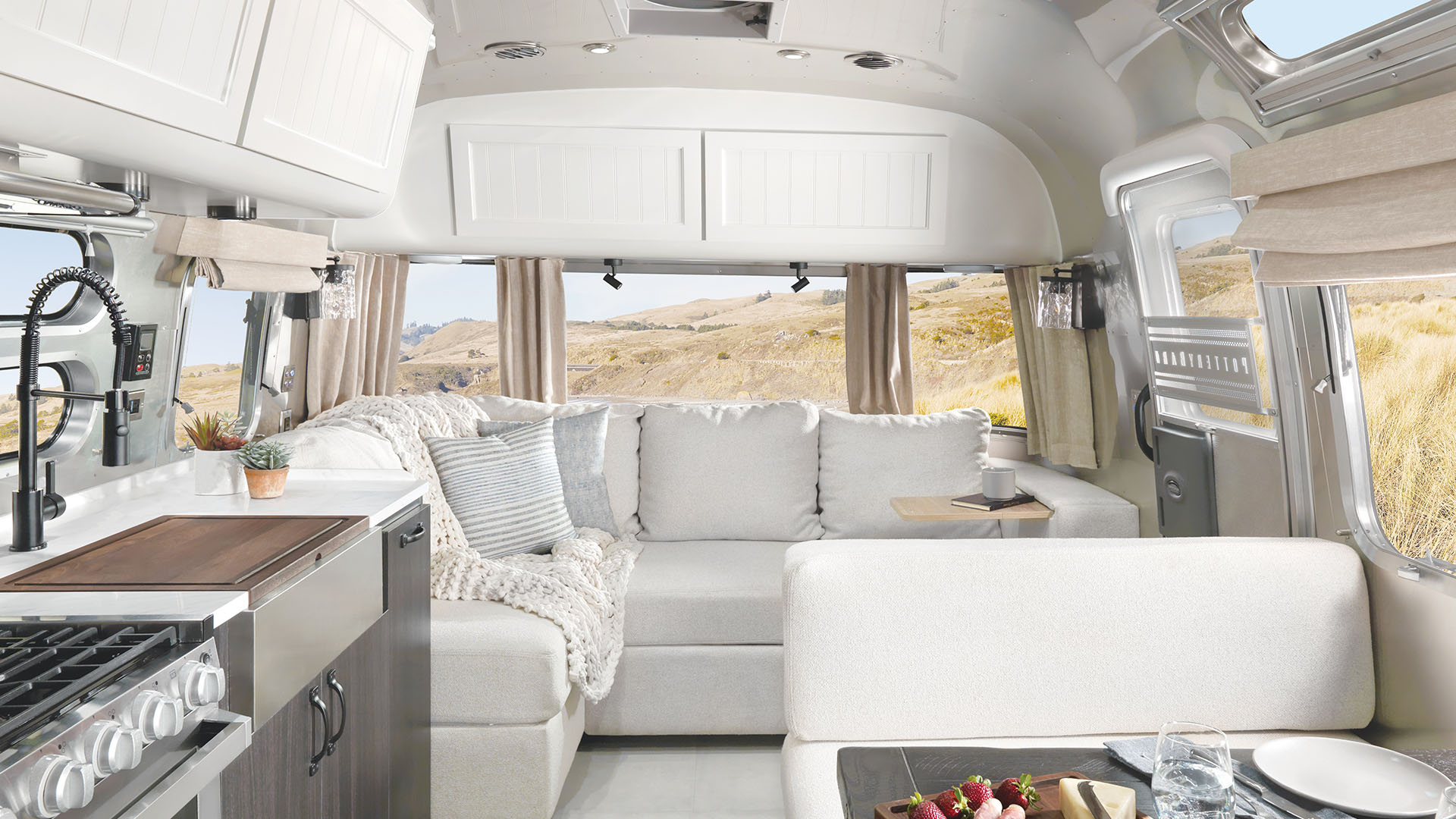 Infused with a West Coast design aesthetic, the Pottery Barn Special Edition features modern fixtures, features, and amenities that make it comfortable, connected, and capable of letting you travel anywhere while feeling like you’re “always home.” It’s finished with hardware, soft goods, fixtures, and other surprising touches crafted with Pottery Barn’s design expertise. From the custom-made sofa and seating, the window coverings, and the full complement of Airstream’s innovative technology solutions, the new Pottery Barn collaboration resulted in a truly “special” edition.

For years, the Tommy Bahama Special Edition Travel Trailer brought the sunny vibes and a sand-in-your-toes mentality to the Airstream fleet. The result of a strong partnership with the Tommy Bahama brand that continues today in Airstream Atlas Tommy Bahama Special Edition Touring Coaches, the collaboration was tailor-made for those who love the sound of surf just beyond the door and a frozen drink in their hand. It began in 2017 with a 28-foot floor plan travel trailer. The following year Airstream released a 19-foot version. 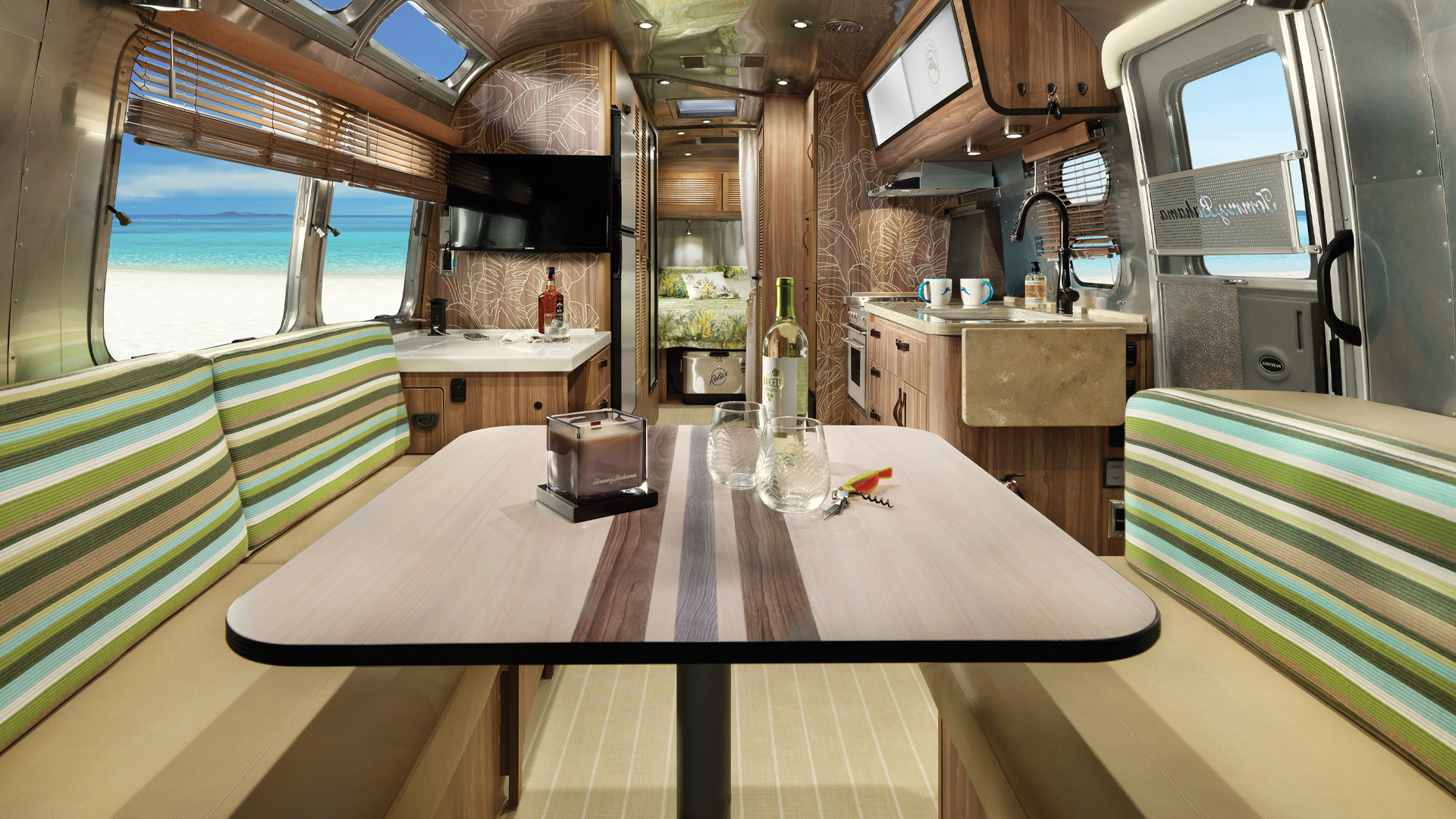 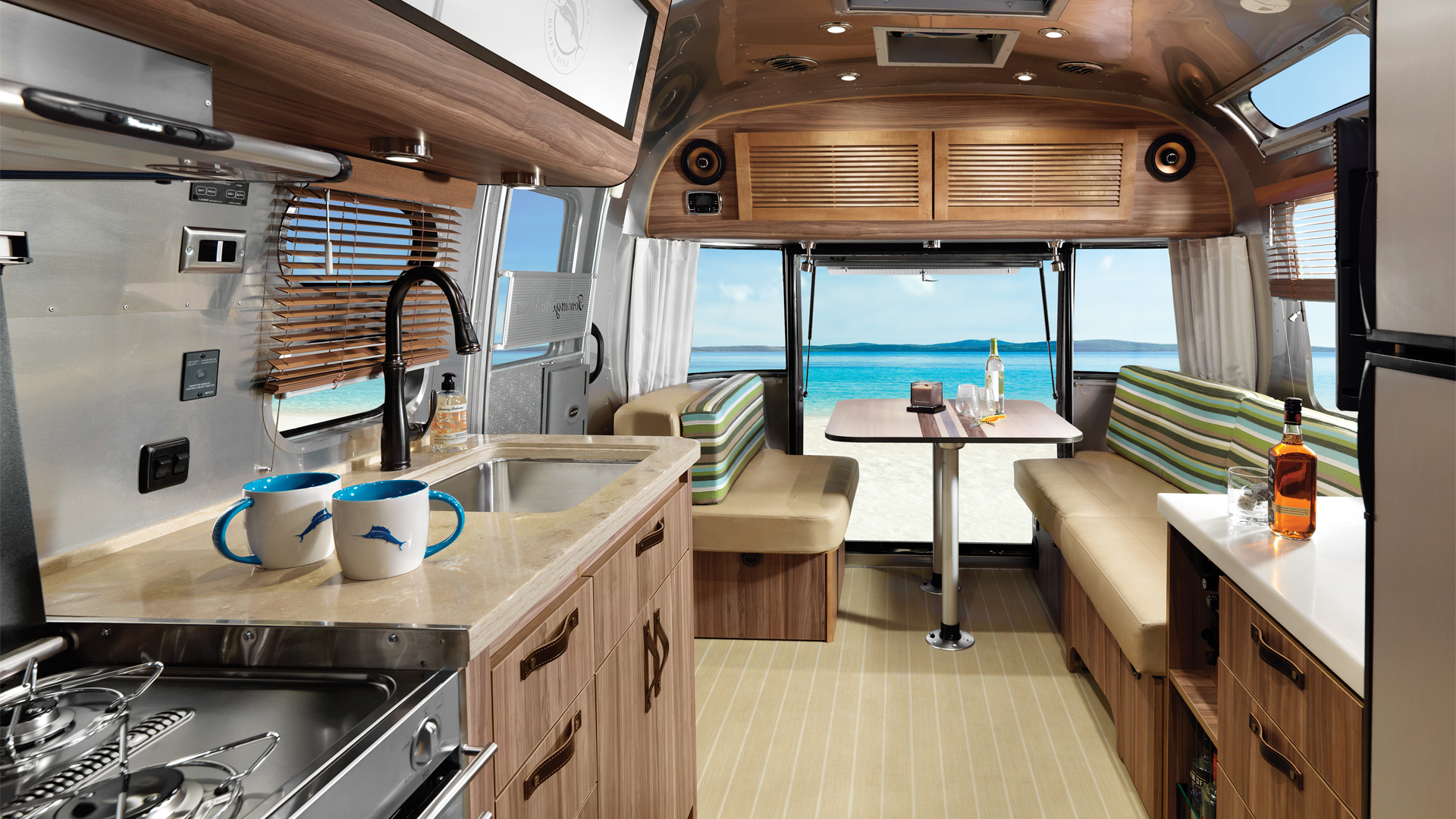 More than simply a decor package, the Tommy Bahama Special Edition Travel Trailer also featured wooden plantation blinds that enhanced the island feel, as well as a unique light-up bar that glowed blue (underneath was a mini-fridge for easy access). Airstream continued its trend of including the ultra-popular Rear Hatch option originally developed for the PanAmerica model and perfected in the Eddie Bauer Special Edition (read on for more about that story). Today, the rear hatch lives on as a popular option in 25-foot and 27-foot Flying Clouds and Internationals.

On the occasion of the 100th anniversary of America’s National Parks in 2016, Airstream partnered with the National Parks Service and Pendleton Woolen Mills. The result was one of the most beautiful and highly sought-after Airstream Travel Trailers ever to hit the road. More than just a Special Edition, the Pendleton Airstream was badged as a Limited Edition. Only 100 were built – one for each year in the history of the National Parks. 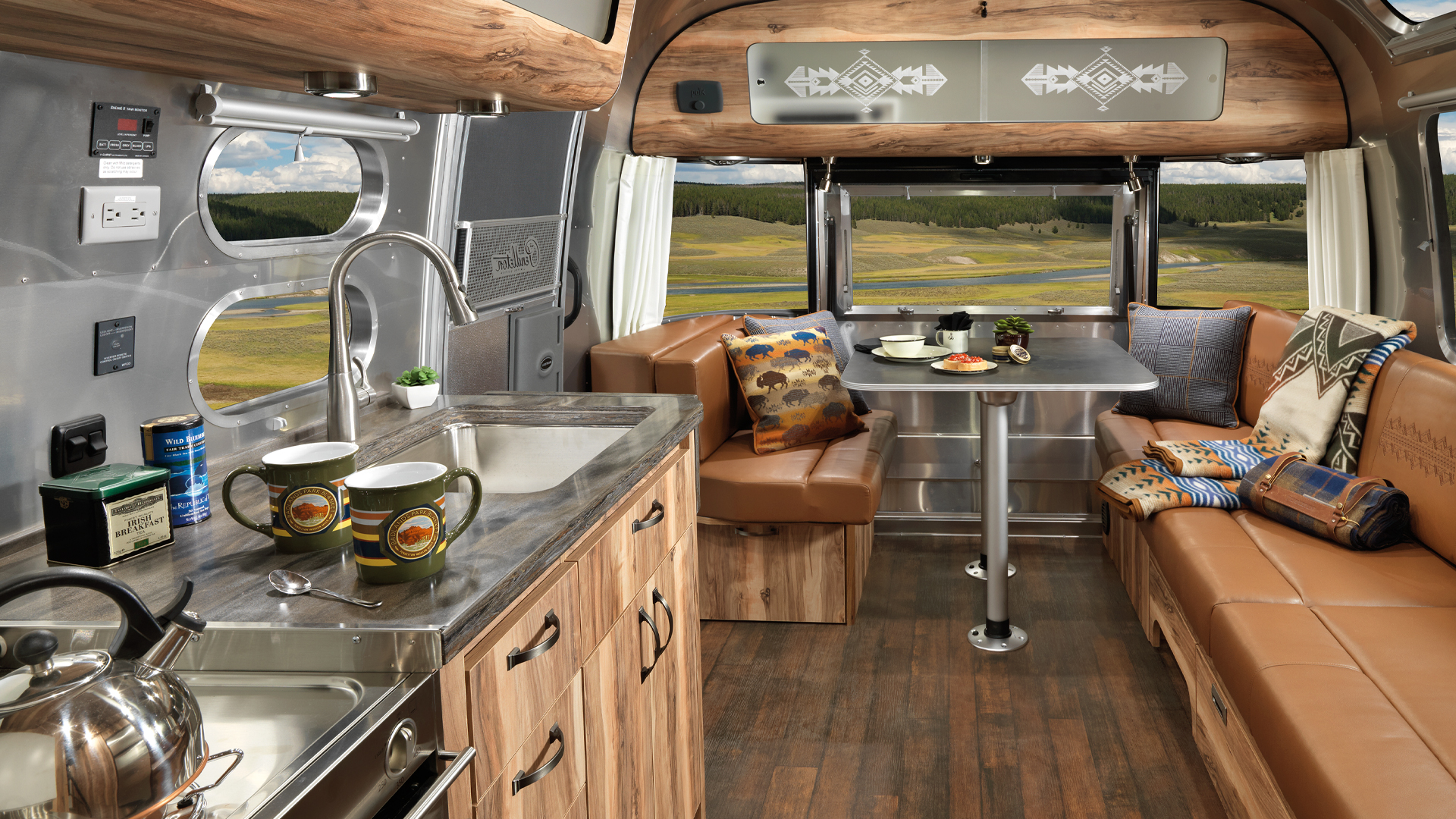 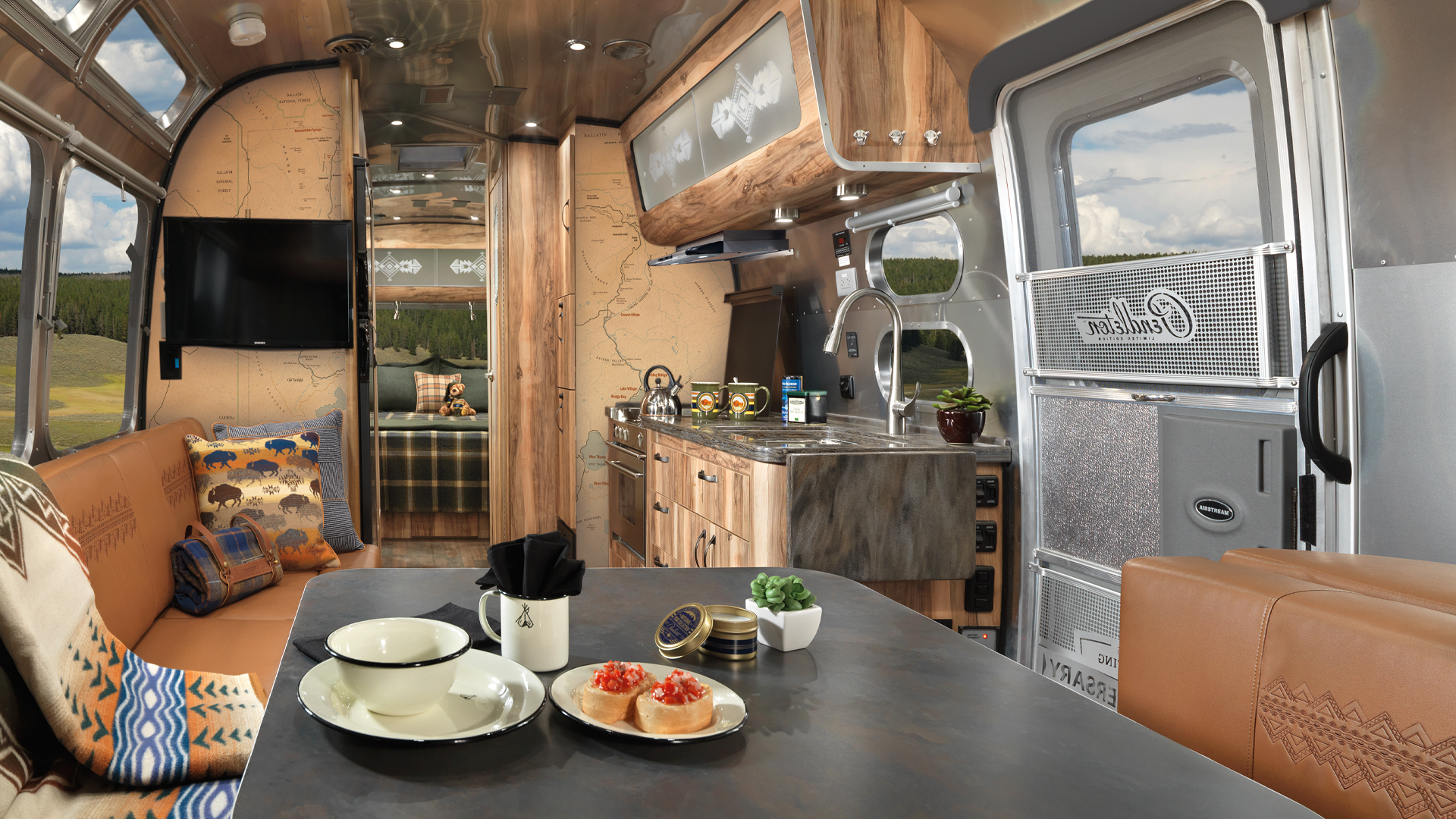 The Pendleton was an instant hit for its ability to combine comfort with outdoor adventure. It included the rear hatch (one of the unifying features of many Special Edition Travel Trailers), but it was in the dark wood and western design elements that the Pendleton made its mark as a mobile mountain cabin you could take deep into the woods. Designed to sleep up to six people, it was perfect for big families or larger groups of friends. The Pendleton was a glamper’s mountain dream – the “hunting cabin” for the professional photographer or the ski chalet for those who wanted to catch first chair after a night camped at the foot of the slopes.

The centerpiece of the decor was a map of Yellowstone National Park lining the interior walls, while Pendleton’s rich, warm, colorful designs permeated everything from the soft goods to the cushions to the frosted designs in the roof locker doors.

Super functional and family friendly, the Eddie Bauer Special Edition came in two floor plans of 25- and 27-feet. While not officially badged as a Special Edition (the model was referred to as the “Airstream Eddie Bauer,” plus its floor plan designation), the Eddie Bauer features some of the most creative choices in Airstream’s history. Today, the model can be seen as a design laboratory for many of the popular features common in today’s Airstream fleet. 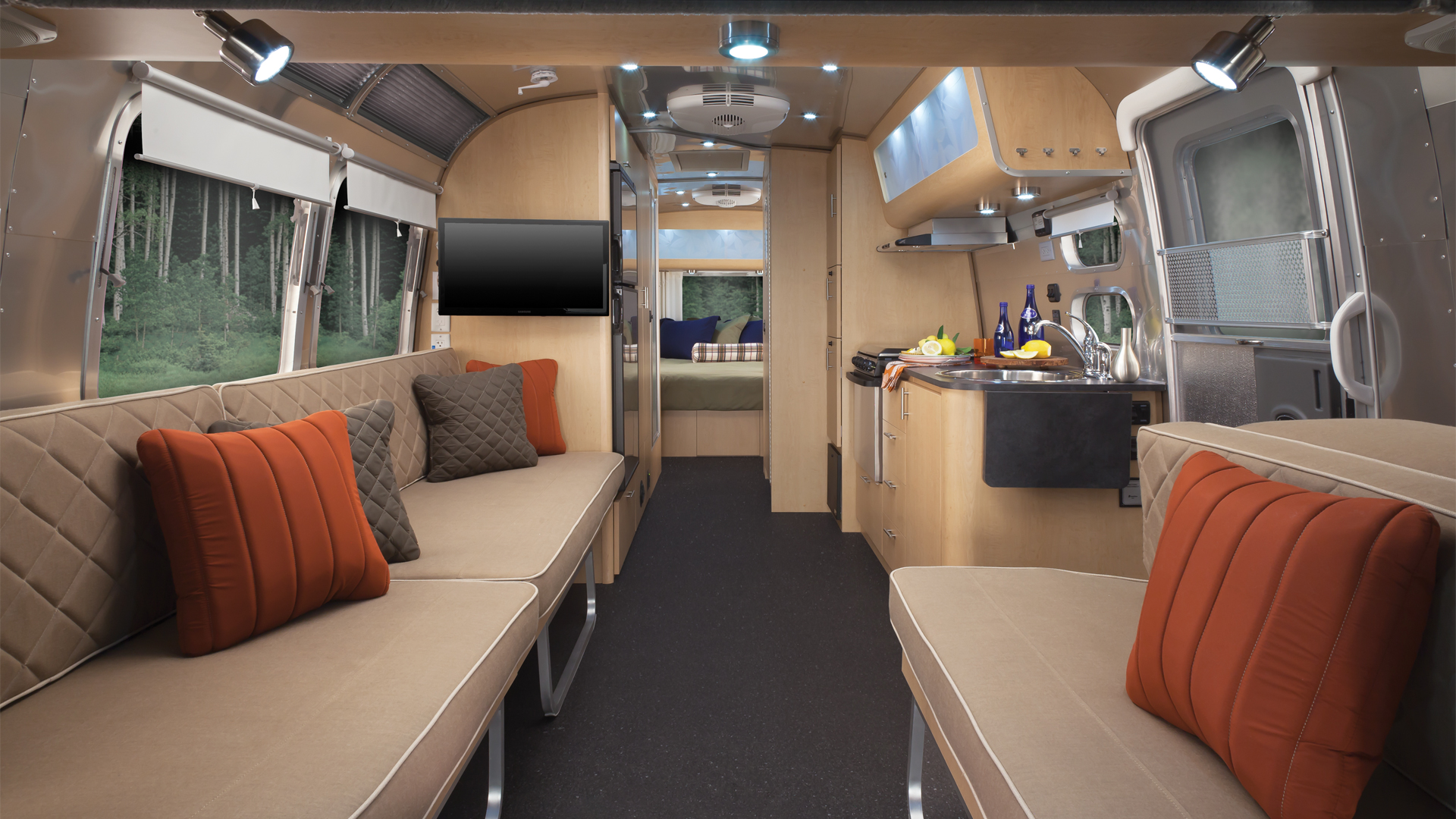 Most notably, Airstream leaned into the design process with the Eddie Bauer team and found an incredible way of incorporating the ample gear storage that adventurers need with access to the great outdoors. Combining a refined version of the rear hatch concept (originally developed for the PanAmerica Travel Trailer in 2009) with unique fold-up dinette and lounge benches, the Airstream team created an incredible silver bullet adventure vehicle. Where the PanAmerica’s rear hatch was aimed at competing with other toy haulers on the market, the rear hatch in the Eddie Bauer was the perfect portal for blurring the lines between the indoors and the Great Outdoors. When not loading the necessary adventure gear through the hatch, a screen pulled down to keep out the bugs while owners ate at the dinette or relaxed on the lounge. 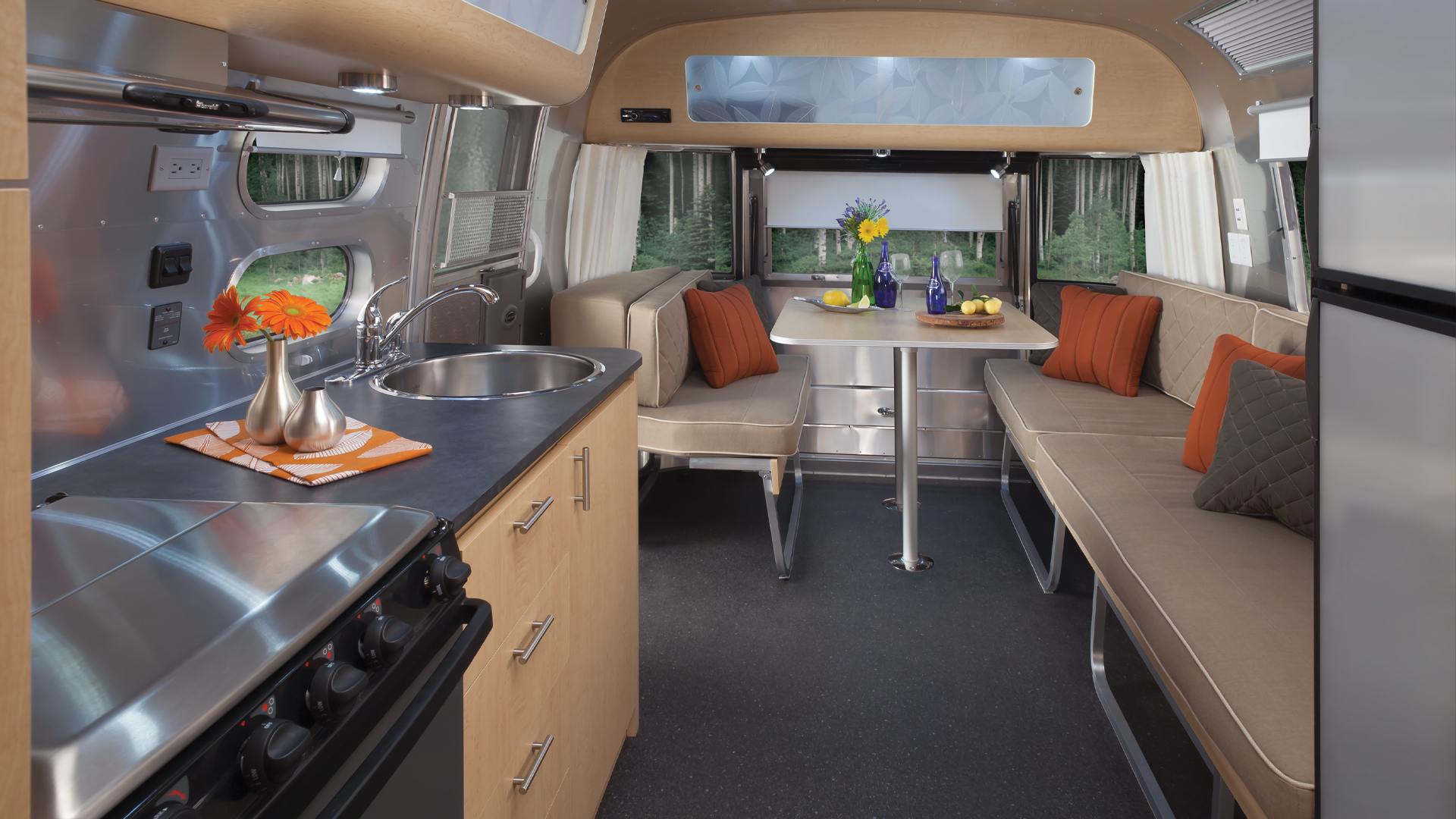 Unique among modern Airstreams, the lounge and dinette furniture was built on extruded aluminum supports, allowing the seating to fold up for more storage. Not only could owners slide a kayak in through the hatch or load up the mountain bikes, but they could also fold away the furniture to make room for more than 400 extra cubic feet of space.

Likewise, design elements from the Eddie Bauer decor would go on to find a home in future models like Flying Cloud, Basecamp, Bambi, Caravel, and International. Truly a one-of-a-kind model, the Eddie Bauer is much-loved by current owners for the versatility and comfort combined in one incredible Airstream Travel Trailer.

Like Pendleton, the Victorinox collaboration resulted in an edition so special that it was limited to a set number of travel trailers – in this case only 125 were produced. This Special Edition marked the 125th anniversary of the iconic Swiss Army Knife manufacturer. As such, the Victorinox 125th Anniversary Special Edition Airstream featured precision in its design and accessories, inspired by the legendary Swiss knife and luxury watchmaker. 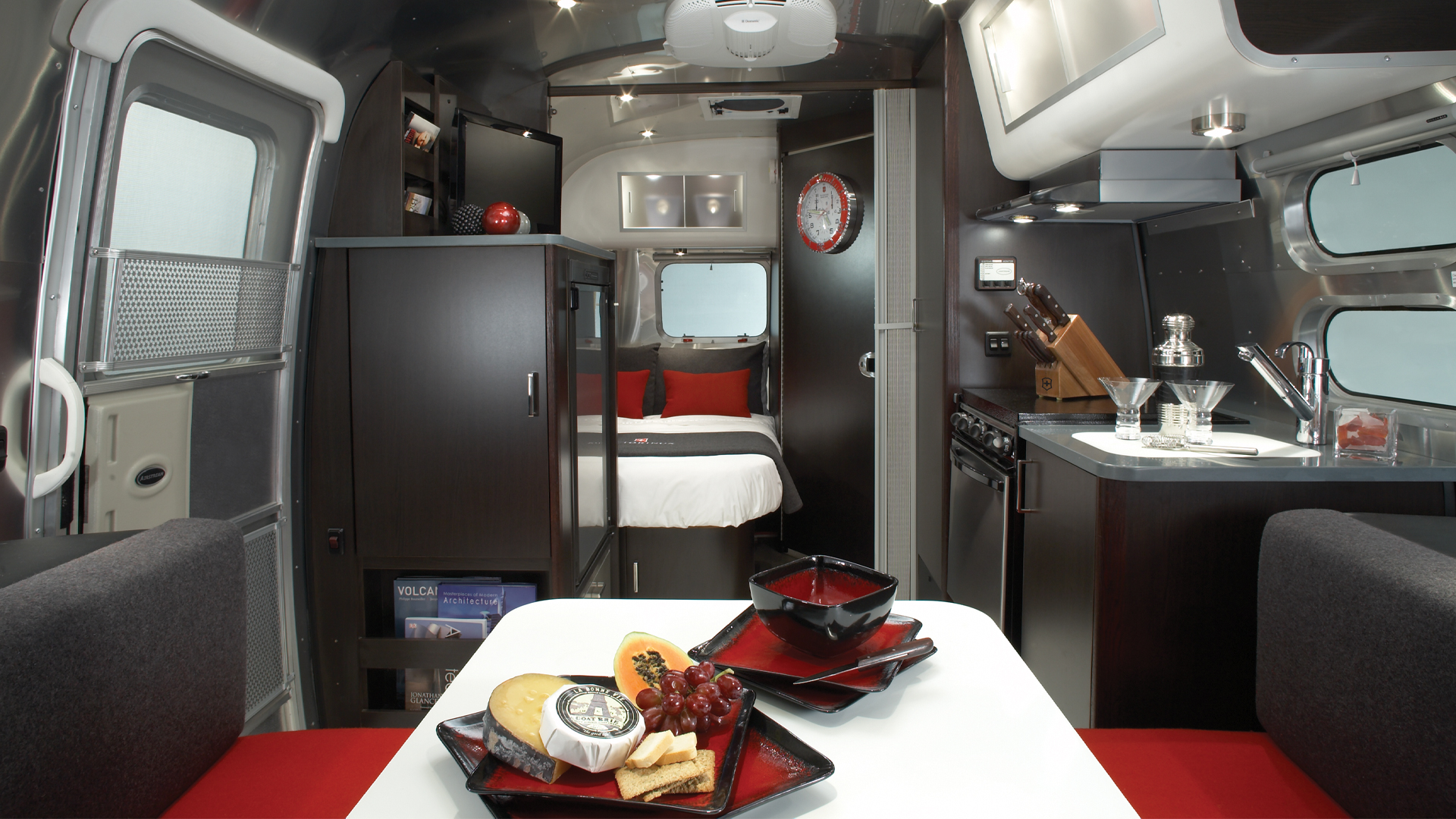 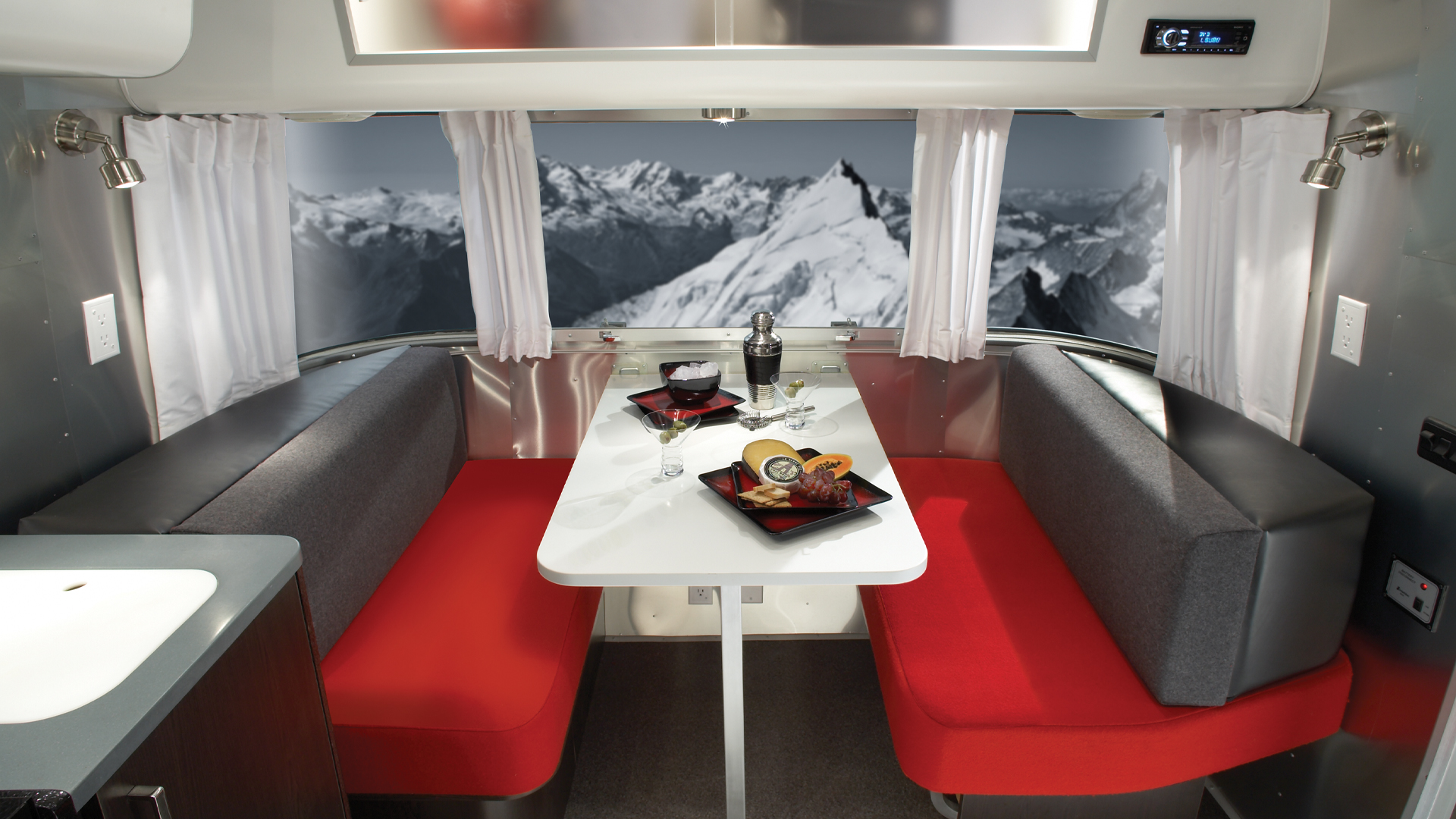 At 19 feet, the Victorinox Airstream featured solid surface countertops, custom bedding, a striking red awning, and a variety of Victorinox accessories, including Swiss Army timepieces, kitchen cutlery, Swiss Army Knives, watches, and more. Only 125 of these special travel trailers were produced, making it one of the rarest Airstream Travel Trailers on the road today.

Design Within Reach: The Paradigm Shift (2008) 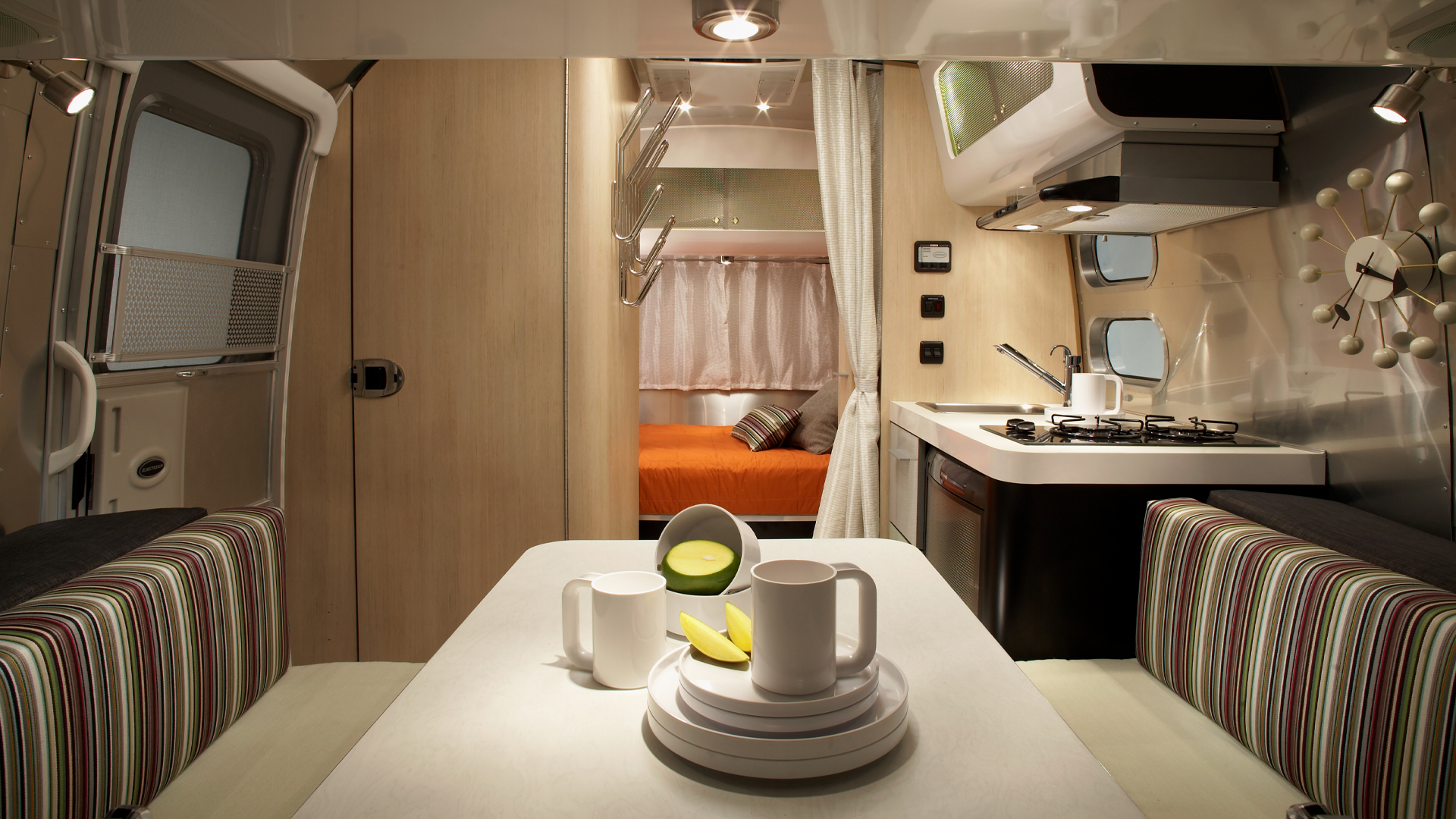 In 2008, Design Within Reach collaborated with Airstream and architect and designer Christopher C. Deam on a model that reimagined the Airstream interior, and the result has influenced Airstream design ever since. The collaboration extended beyond Deam to other notable designers. It featured a Ball Clock from George Nelson, a Wire Coat Rack from Tom Dixon, and Paul Smith striped upholstery by Maharam. 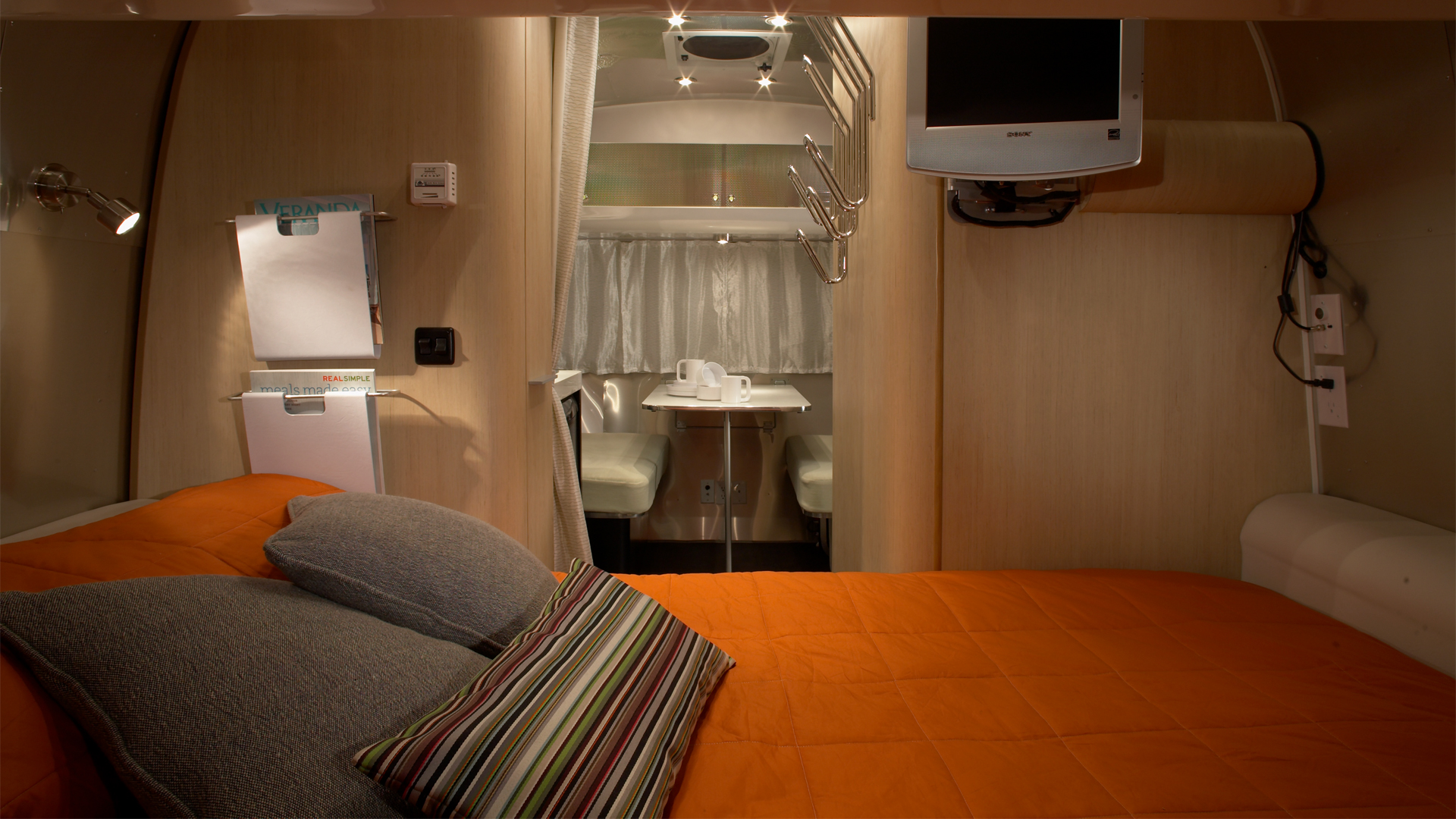 But it was Deam’s keen eye that resulted in one of the most dramatic design shifts in Airstream history, with the inclusion of shiny, reflective aluminum inside the Airstream. Bringing our most iconic exterior element inside filled the interior with light and made it feel more roomy and spacious. It also moved Airstream away from its relationship with fabric wall coverings and shag carpet. Bright, airy, and permeated with forward-thinking design choices, the DWR Airstream was truly a game-changer that influenced the course of Airstream history in dramatic ways.

For the mountains and forests, Airstream would eventually develop the Pendleton and Eddie Bauer Special Editions. And for those who preferred the beach, the Tommy Bahama Special Edition was about a decade out from inspiring many Airstreamers to unhitch and sink their toes in the sand. 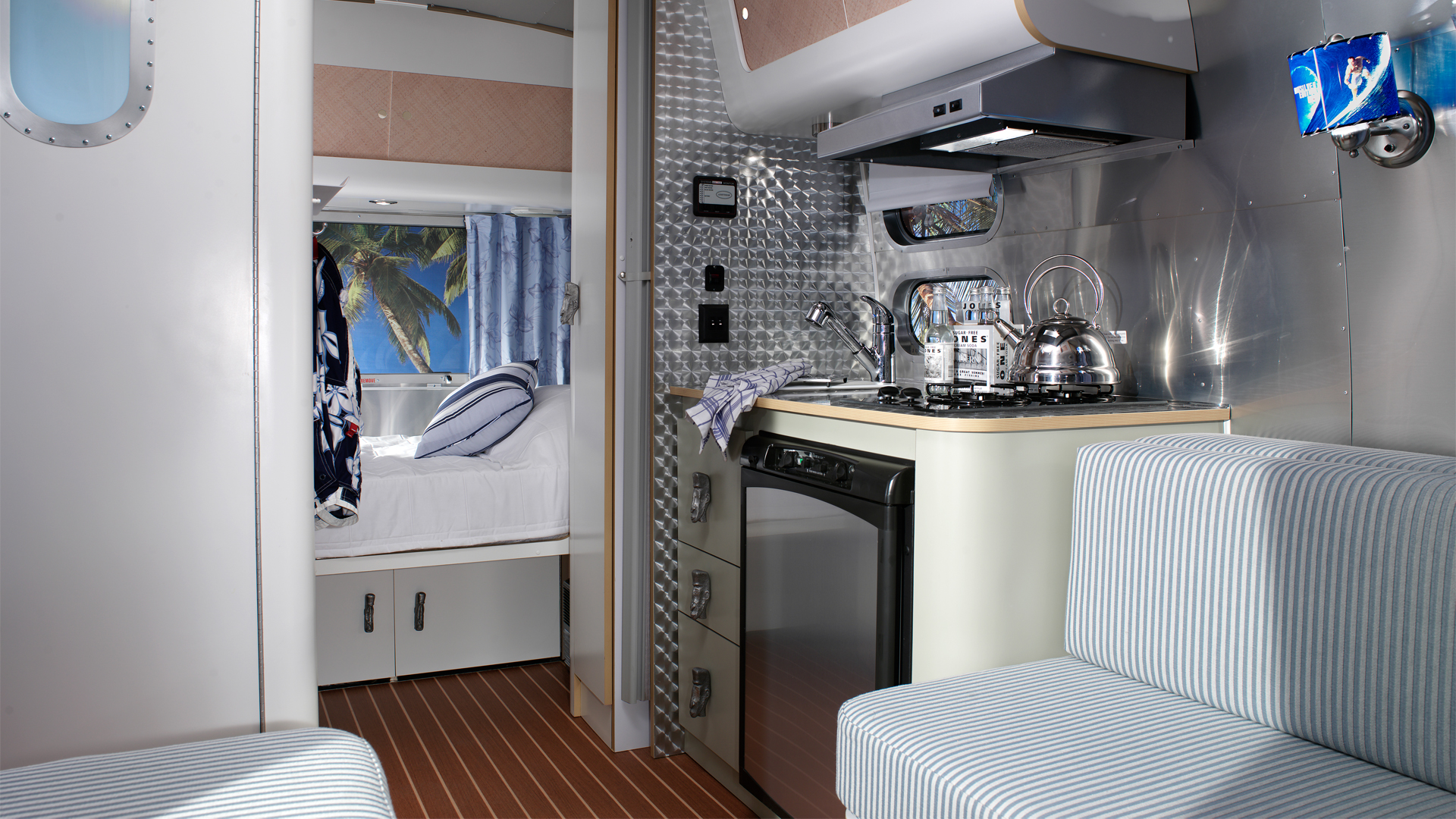 But what about those whose idea of an ocean-going adventure was a bit more active? Moreso, what would an Airstream surf shack look like? The Airstream Quiksilver Edition Bambi was Airstream’s answer in 2006. With a sixteen-foot floor plan resembling today’s Bambi 16RB, the allure of the Airstream Quiksilver Edition was the decor. Breezy white and sizzling brushed aluminum combined with bright blue accents. The ocean-inspired interior featured blue floral prints on the curtains, a surf scene on the shades of the wall sconces, and space to store your surfboard or gear.

More than simply a fun, surf-inspired travel trailer, the Quiksilver Edition paved the way for more brand partnerships down the road – more ways for like-minded brands to bring new ideas and concepts to the table and partner with one of the legends of American design and adventure.

Any Airstreamer will tell you that the Airstream you hitch up to hit the road is the one that’s truly “special.” If you’re dreaming of a special Airstream adventure of your own, find your nearest dealer and step inside today.