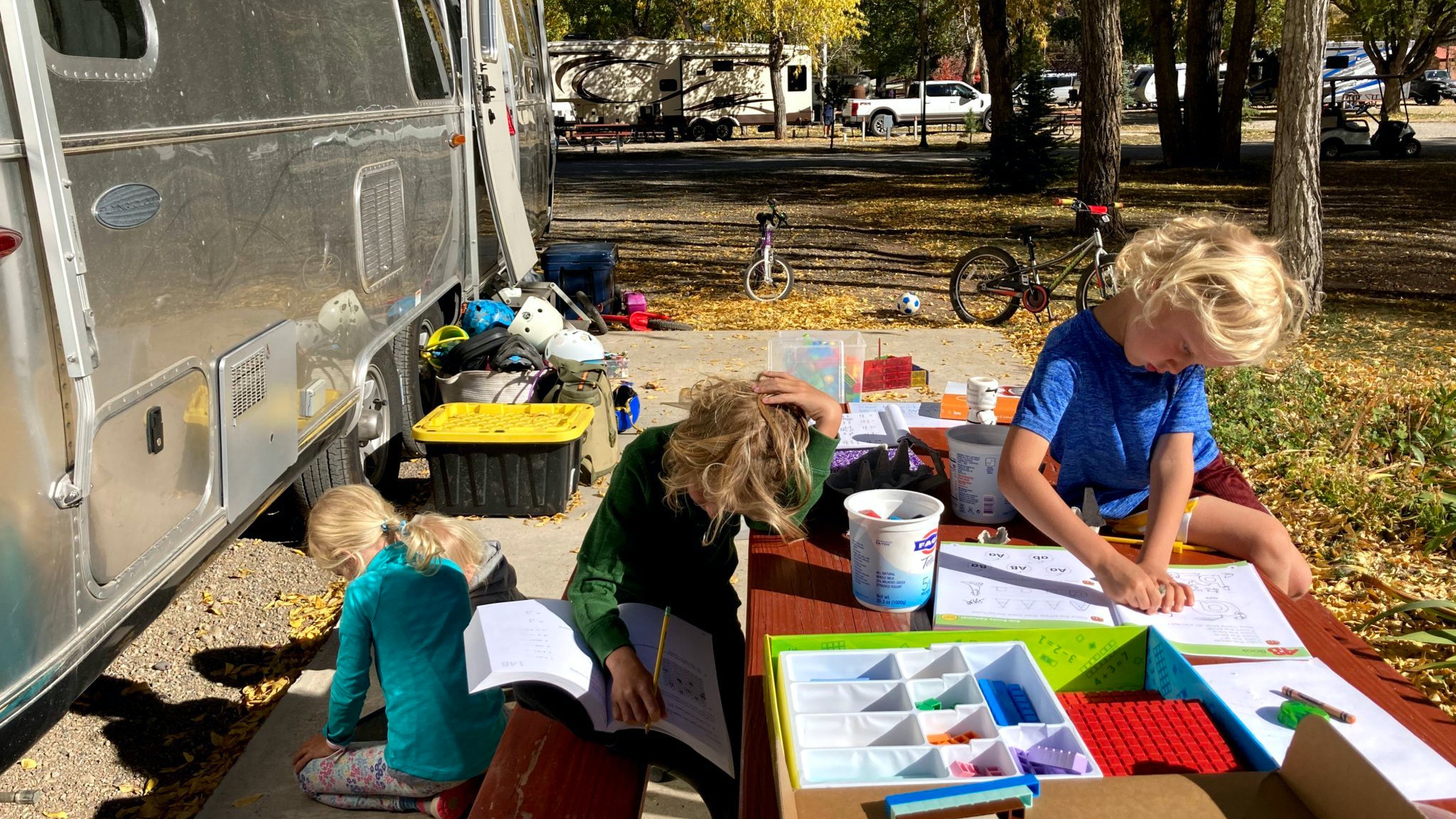 The flexibility of this lifestyle can allow for a slow, present pace that can be more life-giving than checking destinations off a list. But actually choosing that pace requires an unwinding and a relinquishing that isn’t always as natural as it sounds.

Molly Moore, her husband, Joe, and their four young kids have been traveling in their 2019 30’ Airstream (nicknamed “The Chrysalis,” or often just “Chrissy”) since July 2020, attempting to let go, spend time in wild places, and instill a strong foundation of Leaving No Trace, while picking up the trail of their Legos left at campsites across the entire country. She tells her family’s story at The Moore Air and on Instagram (@the_moore_air), recounting their adventures and discoveries from remote parks to big cities, all while growing up and slowing down in tight quarters…together. Read earlier installments here.

We were about 12 weeks in. In some ways, it felt like we had been on the road forever, yet in other ways we were still learning the ropes of living in our Airstream: homeschooling, juggling work, and generally just functioning. We had already explored six states which included the challenges of a nearby lightning strike, campgrounds without water due to the pandemic, a few close calls with forest fires, an off-season snow, and an extreme wind storm. But as these dramas unfolded, we were also getting better at parking the Airstream, communicating (lovingly and gracefully) over walkie talkies while doing so, setting less ambitious expectations for the mileage we’d cover on the road in a day, identifying when and where to wash our clothes, and cooking with fewer dishes so there would be less to hand wash. One thing we hadn’t yet nailed was finding a pace that balanced seeing all the sights with the realities and opportunities that living in an Airstream afforded us.

We were at our last stop in the state of Colorado, in the town of Dolores. We had spent the last 6 weeks high-tailing it around the state, spending 3-4 nights, maybe a week at a given stop. In addition to setting up and breaking down camp, our days were full of school, work, and finding the local hike, bike ride, national park, state park, ice cream shop, playground, lake or stream to fish, or wilderness to explore. Although at the time, this pace still felt slower than what we knew before the journey, we were still moving at a fairly intense clip because why did we take off on this trip in the first place? Didn’t we want to see everything?

In addition to acclimating to the lifestyle and logistics of the road, we were also new to homeschool, or roadschool, as it’s known to fellow travelers. We had an initial honeymoon period with the concept. It felt so exciting to have the freedom of a flexible schedule. It felt so natural to use our given context and location to inform the history or the science. It felt so efficient to teach a variety of ages a given topic, modified for their individual levels and abilities. We had a third grader, a first grader, a preschooler, and a toddler, and given that our most recent school experience had been upended by the pandemic, we were all relieved to establish and settle into an approach to learning that could be our own. We spent our first week using our fresh picked berries to teach math, researching local indigenous tribes, identifying literary devices in the novels we were reading together, finding and diagramming insects, and pausing for yoga.

But as they do, honeymoons evolve into reality. My parents are my teachers. I need someone’s help at the same time that my sibling does. This is hard. This is frustrating. I’d rather be doing something else. What!? School in the car!? What!? I thought we were on vacation!? What!? We can’t just do the yoga part of school!?

So, let’s get back to Dolores: The lifestyle is new. The logistics are new. Roadschool is new. We’ve been moving at a fast pace. And we’ve only been at it 12 weeks – a deceptive amount of time to make you pridefully believe you should have things under control by now. Although we had slowed down from the frenzied hamster wheel of two full-time jobs and four full-time kids (and their lunchboxes and activities and social lives), we hadn’t slowed down to a pace most appropriate for full-time, Airstream living. We hadn’t fully leaned into the flexibility that the lifestyle afforded us. And in Dolores, our hand was forced.

We had plans; plans to efficiently conquer school and work in a few hours one morning, so that we could spend the afternoon, likely our last available afternoon, at Mesa Verde National Park. The campground was closing for the season the following day, so this was our last chance. It would be so educational, so beneficial. It wasn’t just a place of beautiful hikes, but of rich history. It was a way to learn and celebrate the unique lifestyle of these Puebloan tribes. We will get this trip in. It will be good. We will have fun. We will learn.

But that morning, “efficiently conquering school and work” and all the demanding, strong-arming, “hurry up!” that it turned into crescendoed with tears, sobs, screams, torn paper, and stomping away. The goal of Mesa Verde was not a shared goal and had no weight. Few others felt the urgency of completing school to get to this amazing place. Few others felt like scrambling through an assignment that felt hard, needed more time, or wasn’t making sense. Though not said with actual words, most others were screaming to slow down, have some space, rest, and lean into this accessible gift of a slow afternoon. 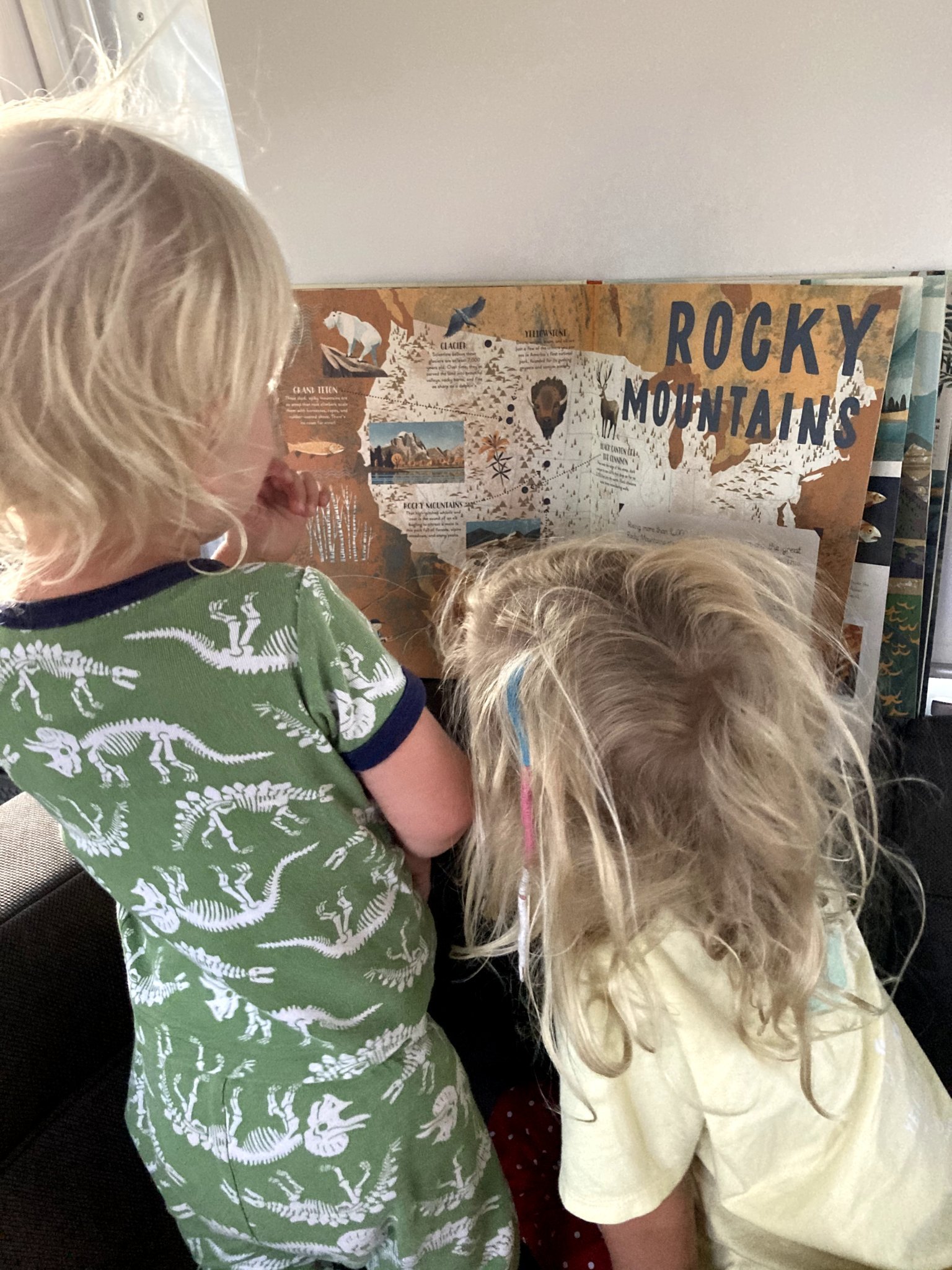 The kids headed to the nearby creek for what I thought would be a ten-minute breather to collect themselves and regroup. At this point, I'm still intent on making our plans come to fruition, albeit not as efficiently as I planned, but contingent-efficient nonetheless. I'mquickly pulling together peanut butter sandwiches. I'm coming up with backup plans for the lack of progress during school. I'm mapping our route to Mesa Verde. And as I head down to the creek to gather the kids, I see them all together, excited about their recent discovery – Colorado crawfish. They are slowly and methodically perched in the water like herons stalking their prey. They are working together, all perched in strategic locations. They are still and slow. They are entranced. They are fully engulfed in the moment. All four of them.

I took a breath.

And in that moment, I decided that this was how we needed to spend the rest of the day.

We researched crustaceans later that day. We drew diagrams of them which allowed us to compare them to the insects we had diagrammed just weeks earlier: the number of segments to their bodies, the number of legs, how they eat and reproduce. The failed day at school, the missed opportunity of Mesa Verde all redeemed not merely in the biology we learned, but realizing some of the freedom we now had and how we could rely on it to better provide for our needs.

Still to this day, two years later, I haven’t been to Mesa Verde National Park. I’d like to go one day. It remains on our list. But also, it will forever hold a place in my heart for being the sacrifice it took for me to learn this important lesson. We have missed many more places along the way. Anyone who has been on a road trip will tell you the same. But while destinations are a large part of why we do what we are doing, the lifestyle is the true gift. This lifestyle has afforded us the ability to get to know ourselves and each other and operate in ways that are responsive to our unique needs. We have space to be flexible, space to change, space to respond. Do we need to tackle a worksheet? Or read in a hammock? Or look for crawdads? I don’t know, but let’s find out…