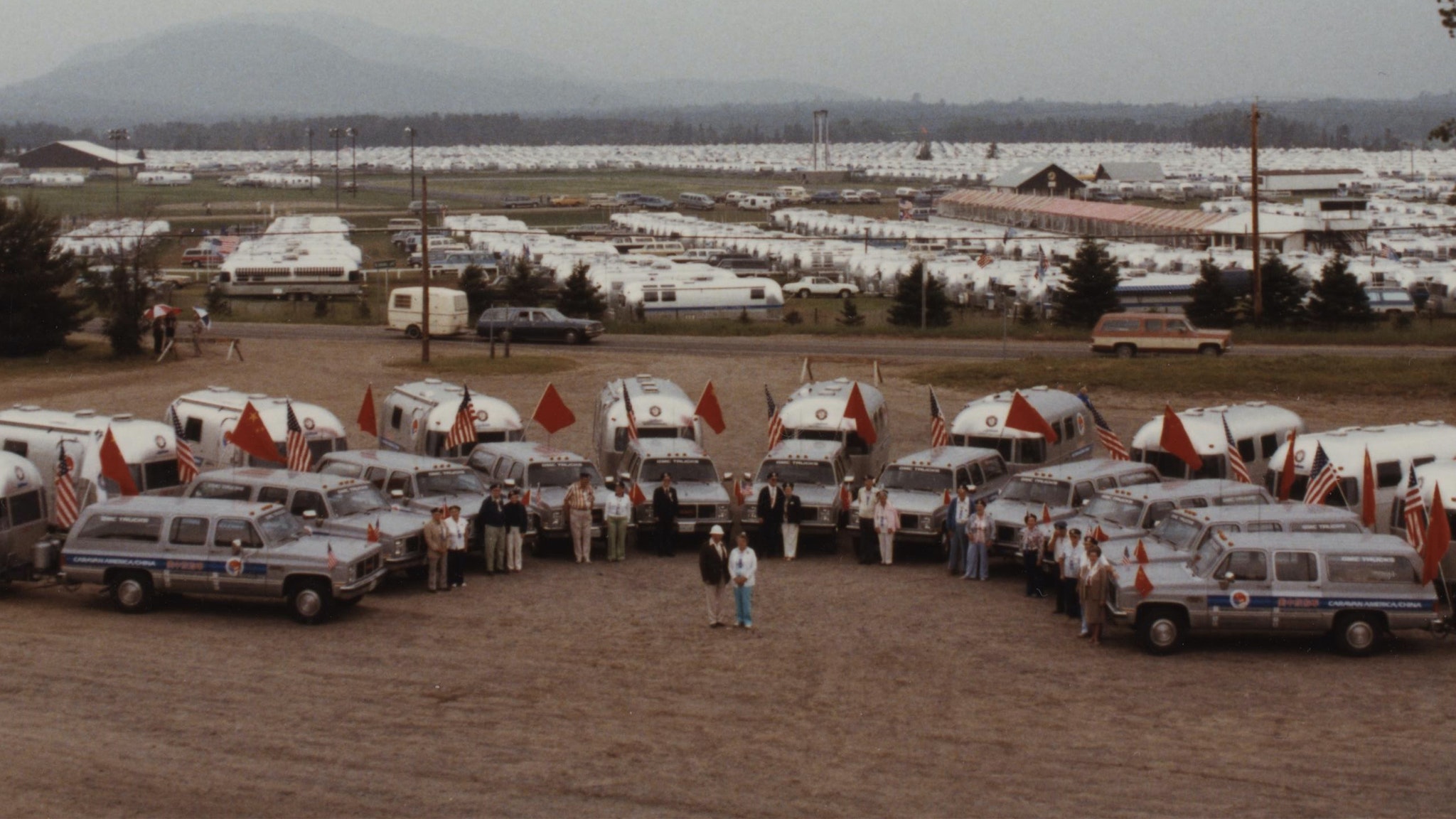 It's safe to say that the iconic Airstream Wally Byam Caravans made history as they traversed the globe in some of the most remote areas. 2021 marks the 70th anniversary of the Caravan that started it all: the journey to Mexico and Central America from December 1951 to March 1952. On the occasion of that anniversary, we're looking back at 70 years of incredible adventures in far-away places.

Wally Byam opened the first Airstream factory in 1931 in Culver City, California. From the very beginning, Wally was eager to get out on the road and put his product to the test. He knew that the best way to introduce new owners to the Airstream Way of Life was to show them first-hand all of the possibilities for travel and adventure.

In 1951, Wally decided to lead a group of travel trailers from Texas to Nicaragua. The trip was advertised in several publications including the Los Angeles Times. Wally expected around 35 trailers and was surprised when 63 trailers of all kinds arrived at the departure point in El Paso, Texas. In order to keep track of everyone, a number was painted on each trailer, with Wally’s Airstream being #1. This tradition continues today with the Big Red Numbers you see on some Airstreams.

The first Caravan ran from December 1951 to March 1952 as the group traveled through Mexico, Guatemala, El Salvador, Honduras, and ended in Managua, Nicaragua. It was not an easy trek — only 14 of the original 63 trailers completed the trip, and Wally said he’d never do it again. Luckily for all of us, that vow lasted only a year. 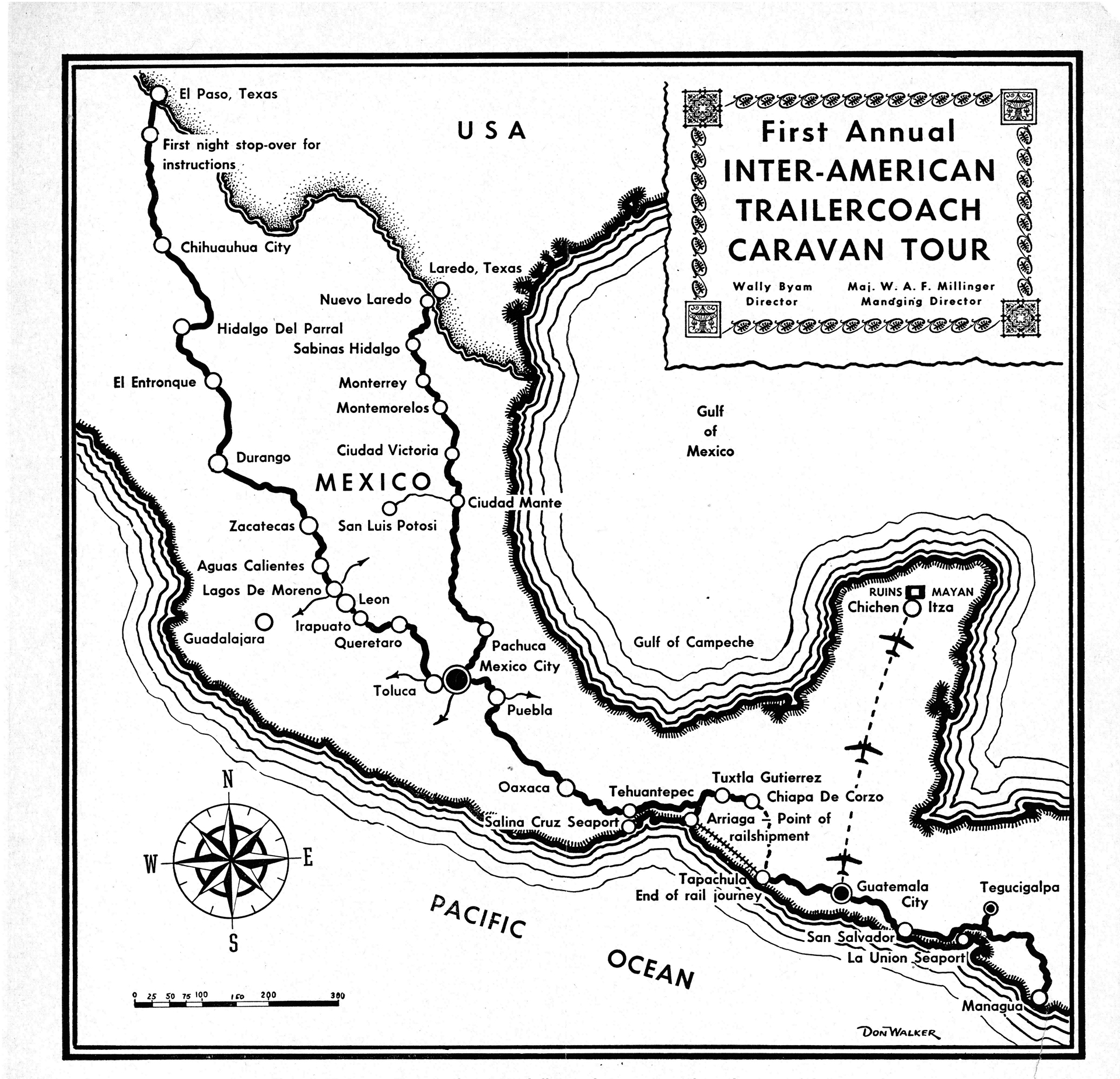 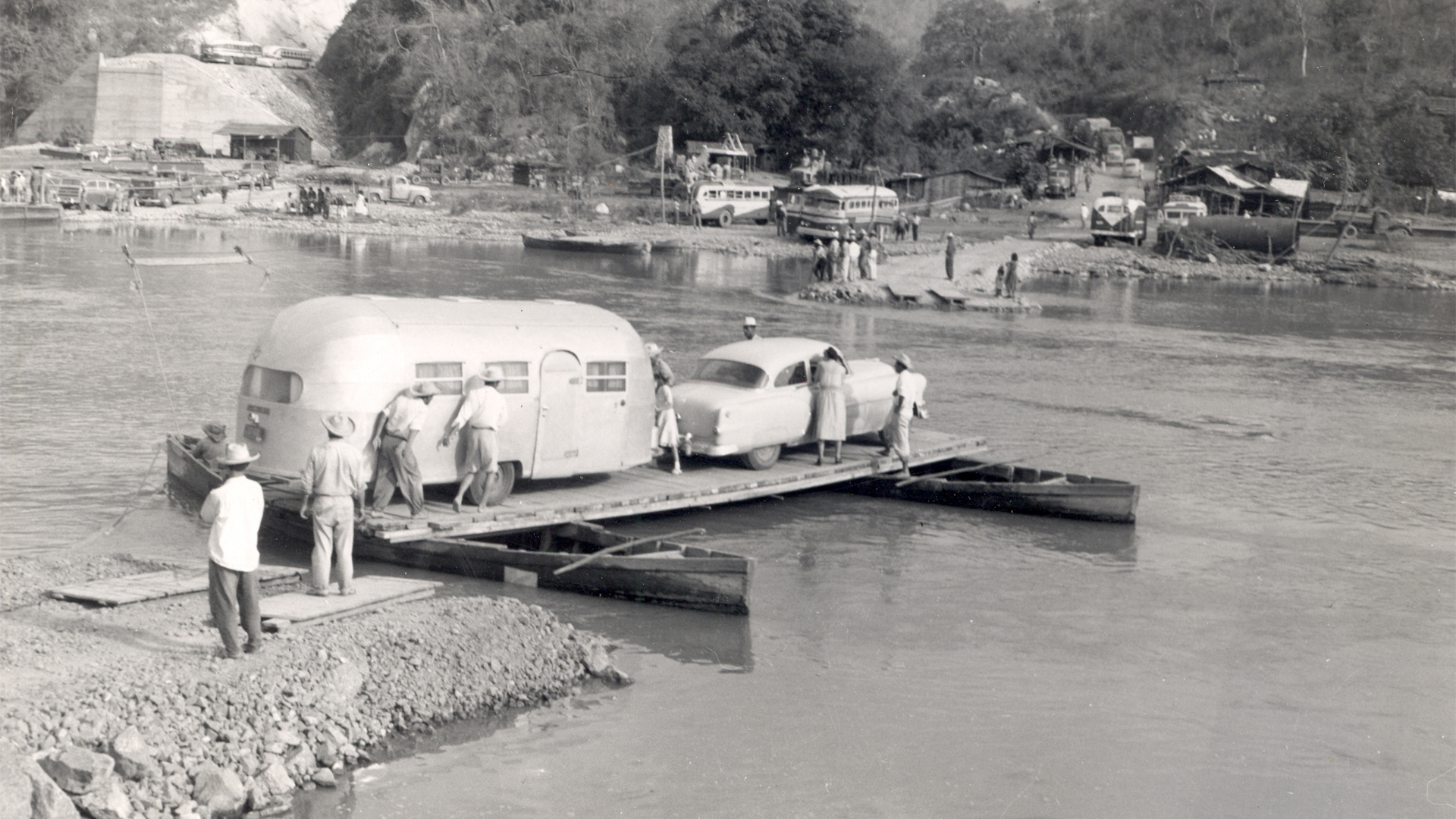 After receiving several requests to lead another Caravan, Wally agreed to lead the Mexico West Coast Caravan during the Winter of 1952-1953. This Caravan introduced many elements that are familiar to Caravanners today including “Meeting Time,” a common “kitty” to pay for expenses, and “jobs” for Caravanners including the Parking Committee and Caboose.

An expert marketer, Wally knew that Caravans were an important tool for the company. In 1954, he hired professional photographer Pat Terry to photograph and publicize the Mexico East Coast Caravan. This Caravan of approximately 100 trailers was also featured in a June 27, 1954 article in Look Magazine.

The first Caravan to Canada was held in the Summer of 1954 and consisted of approximately 100 trailers of all brands. The group traveled through Western Canada, visiting the Calgary stampede and the Olympic Games in Vancouver. Soon, Caravans to Mexico and Canada became annual events. 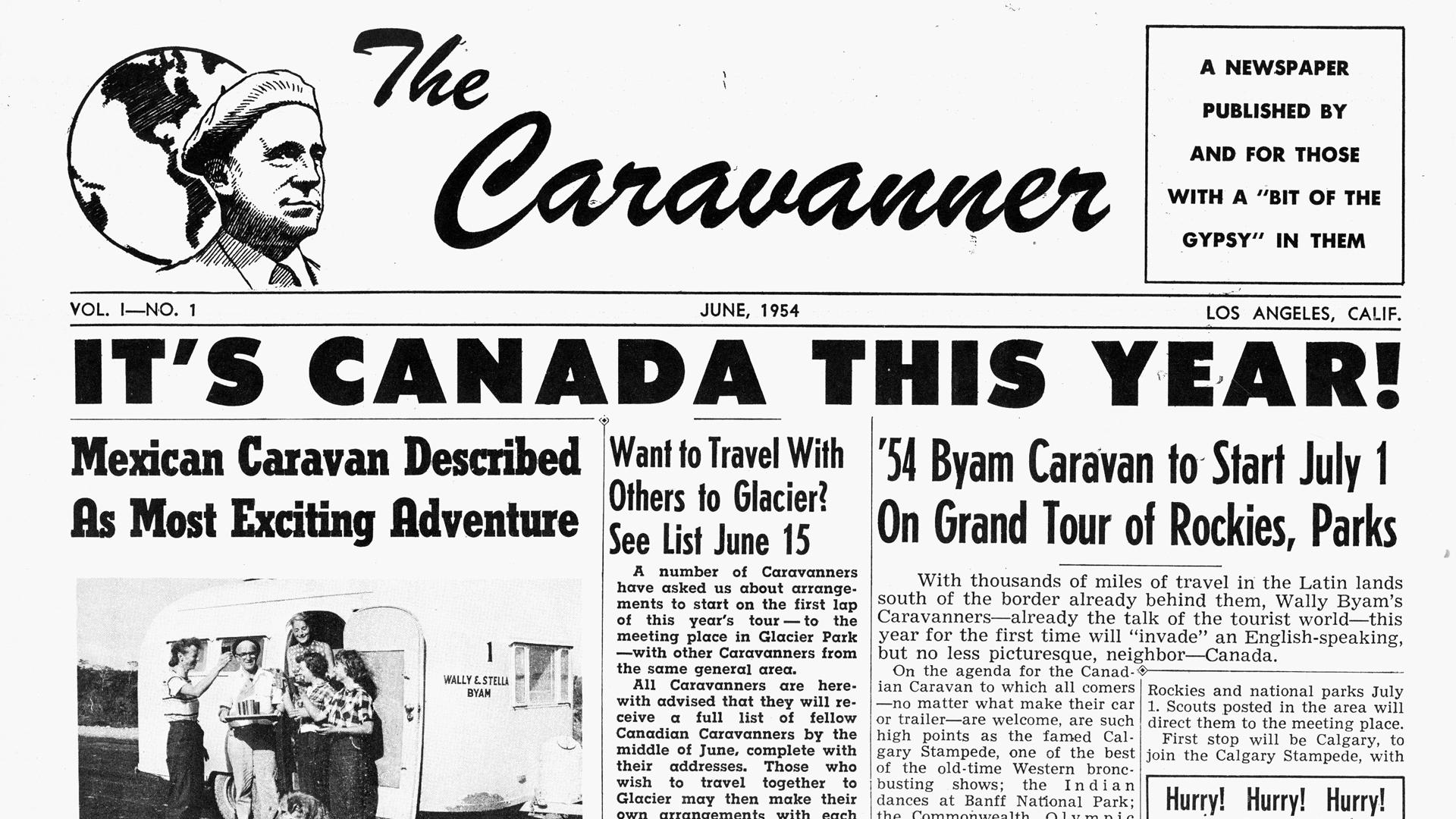 In 1955, Wally embarked on the biggest Caravan to date. Nicknamed the “Caravan 500” because it featured 487 travel trailers of all brands, the participants traveled from Nogales, Arizona to Acapulco and back. Unfortunately, the large group proved to be too much to manage and Wally suffered a heart attack while on the trip.

After recovering from his heart attack, Wally traveled to Europe during the Summer of 1955 to scout locations for a future Caravan to Europe. He asked his cousin Helen Byam Schwamborn to lead the 1955 Eastern Canadian Caravan in his absence.  Wally also asked Helen to work with Airstream owners to form an Airstream club. On August 3, 1955 the Wally Byam Caravan Club was formed in Kentville, Nova Scotia.

1956 featured two Caravan firsts: the first overseas trip to Europe and the first trip to Cuba. The 87 European Caravanners visited sixteen countries in six months. Not to be outdone, the 82 Cuban Caravanners had the opportunity to meet Cuban President Fulgencio Batista. 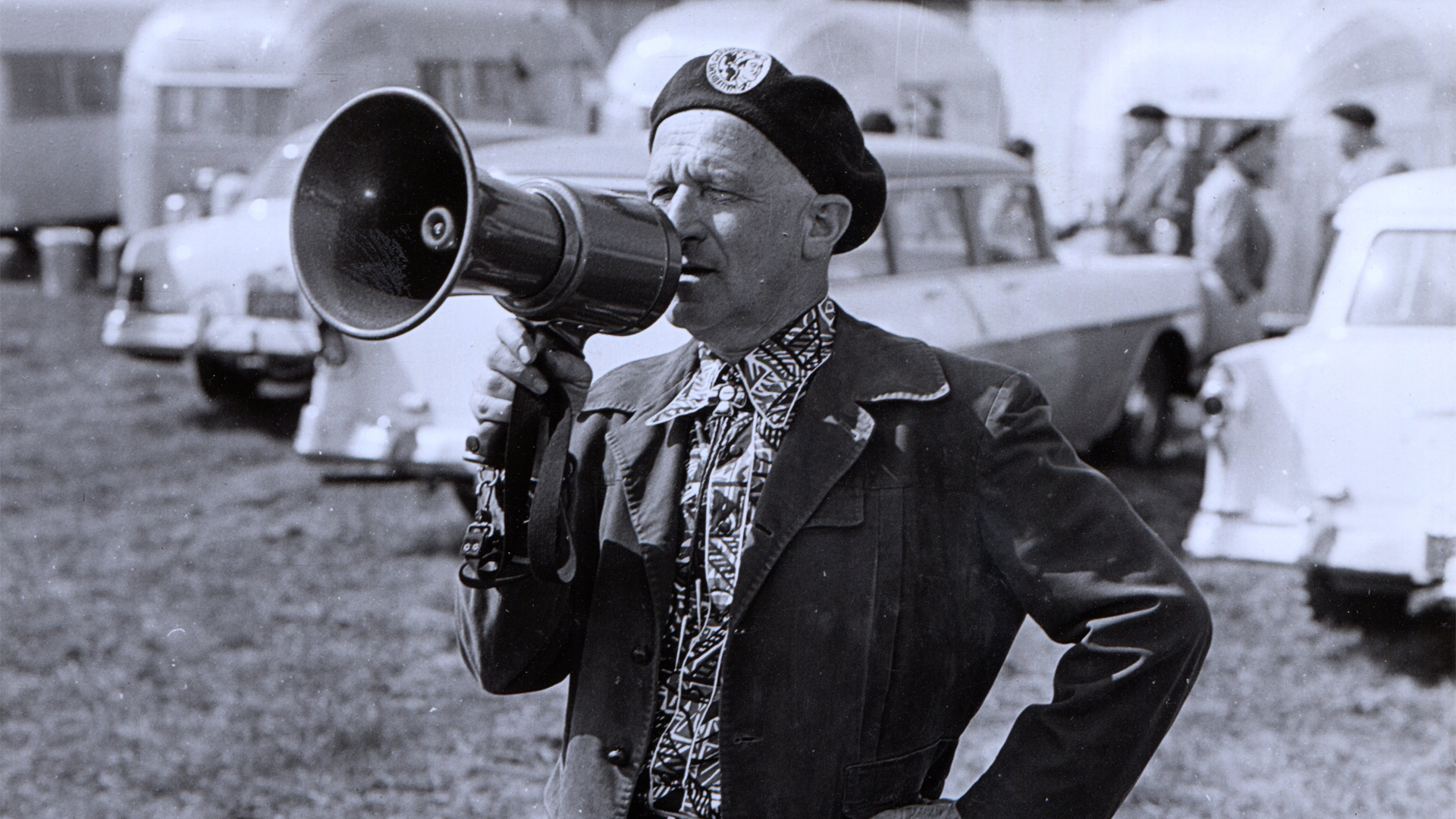 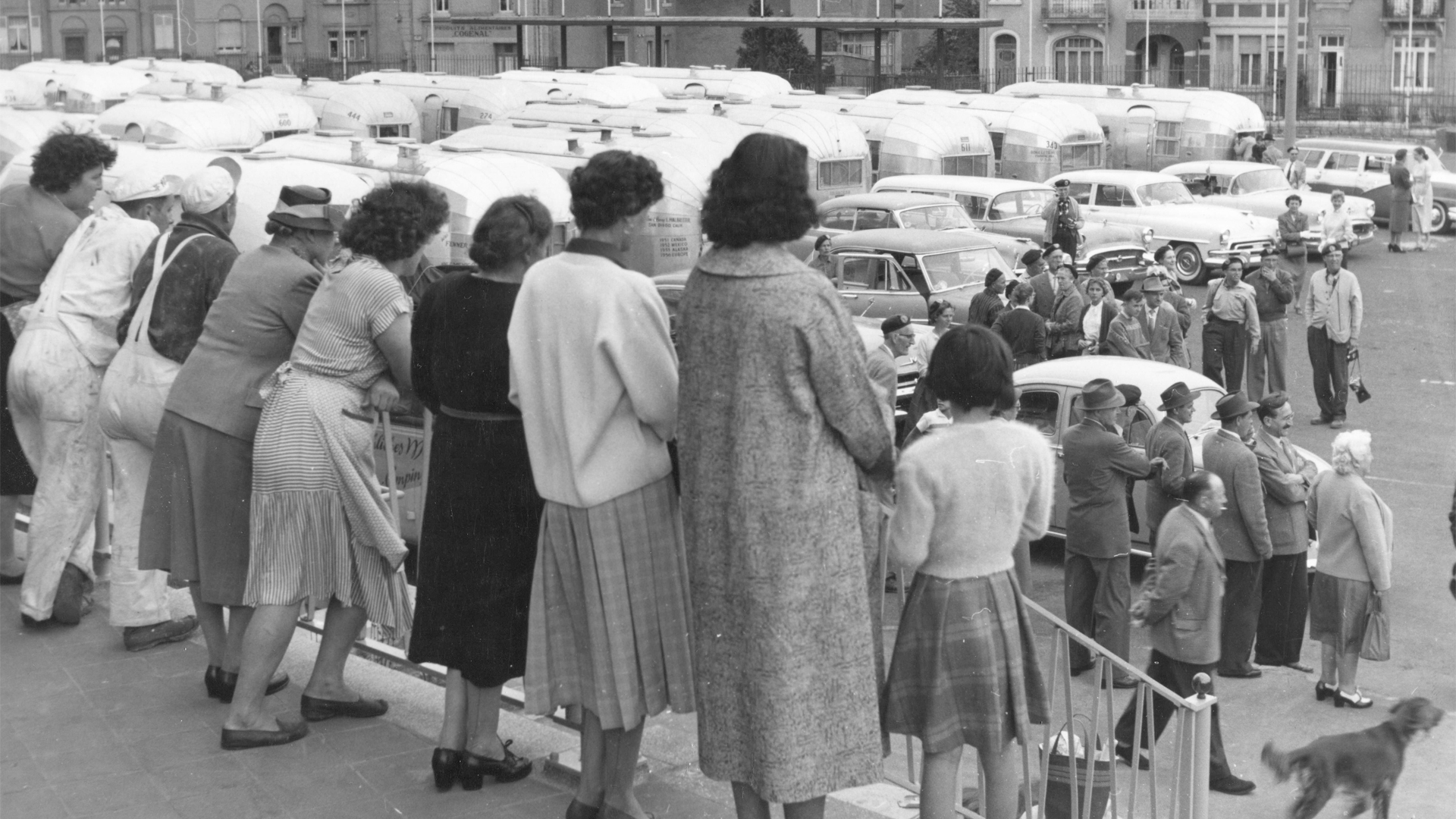 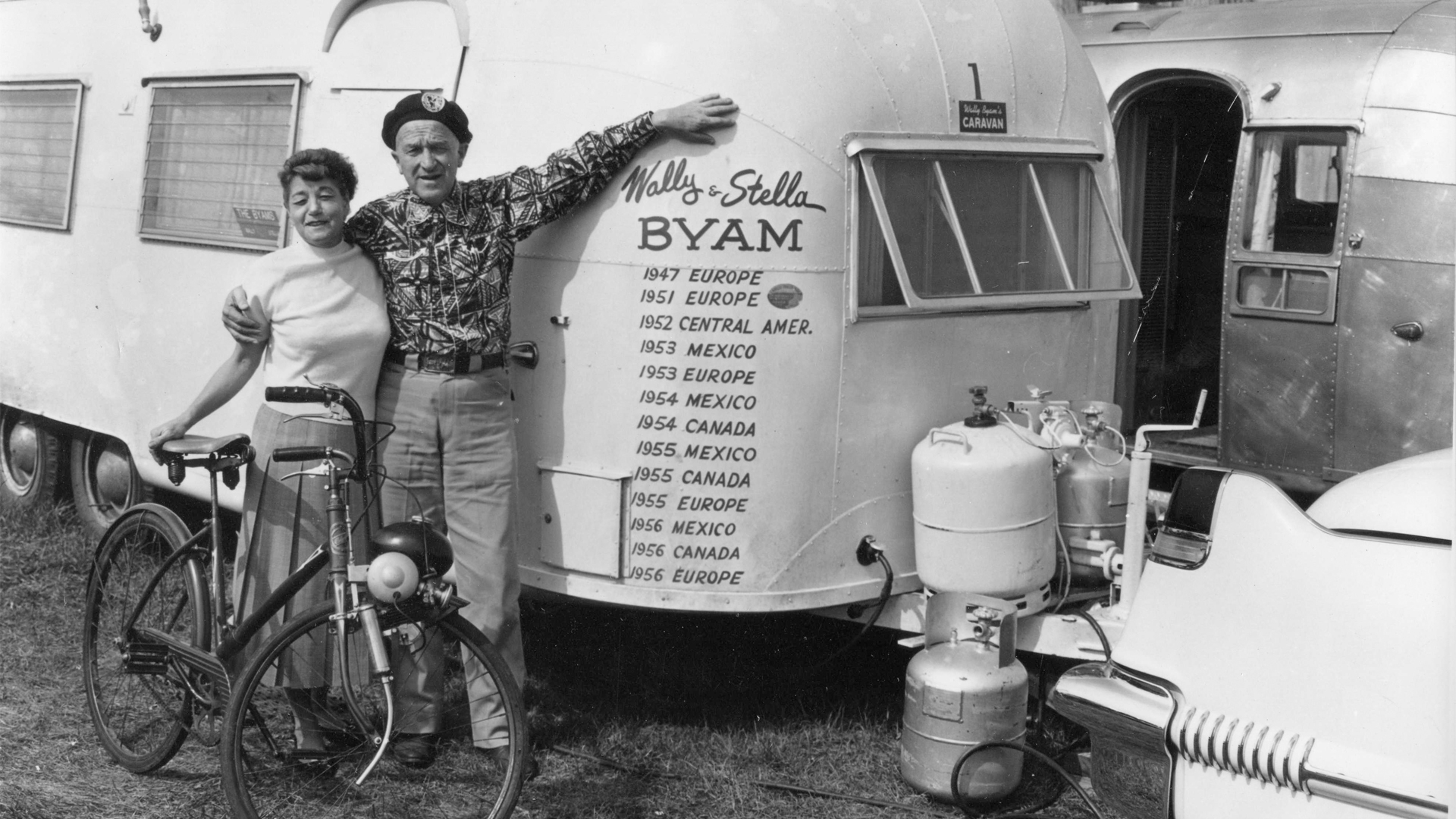 The first all-American Wally Byam Airstream Caravan was held in 1957. Traveling entirely within the continental United States, the group attended the Kentucky Derby and the Indianapolis 500. This was the first Caravan to be led by Wally’s famous Gold Airstream.

In the Winter of 1958, Wally set out once again in his Gold Airstream to lead a Caravan of 35 Airstreams through Mexico and Central America. This 5-month Caravan retraced the route from the very first Caravan. Although the group still encountered rough roads and rivers that had to be forded, the Caravan was ultimately a success. It was even featured on the ABC television program Bold Journey in January of 1959.

In 1959-1960, Wally embarked on his greatest journey yet: a Caravan from Cape Town, South Africa to Cairo, Egypt. In total, 106 people ages 6 to 86 joined this incredible 7-month, over 12,000-mile long journey across Africa. Caravanners met Ethiopian Emperor Haile Selassie, visited Victoria Falls, explored ancient Zimbabwe ruins, and more. To top it all off, Wally negotiated with the Egyptian Department of Antiquities to allow the Caravan to stay the night at the foot of the Pyramids of Giza. 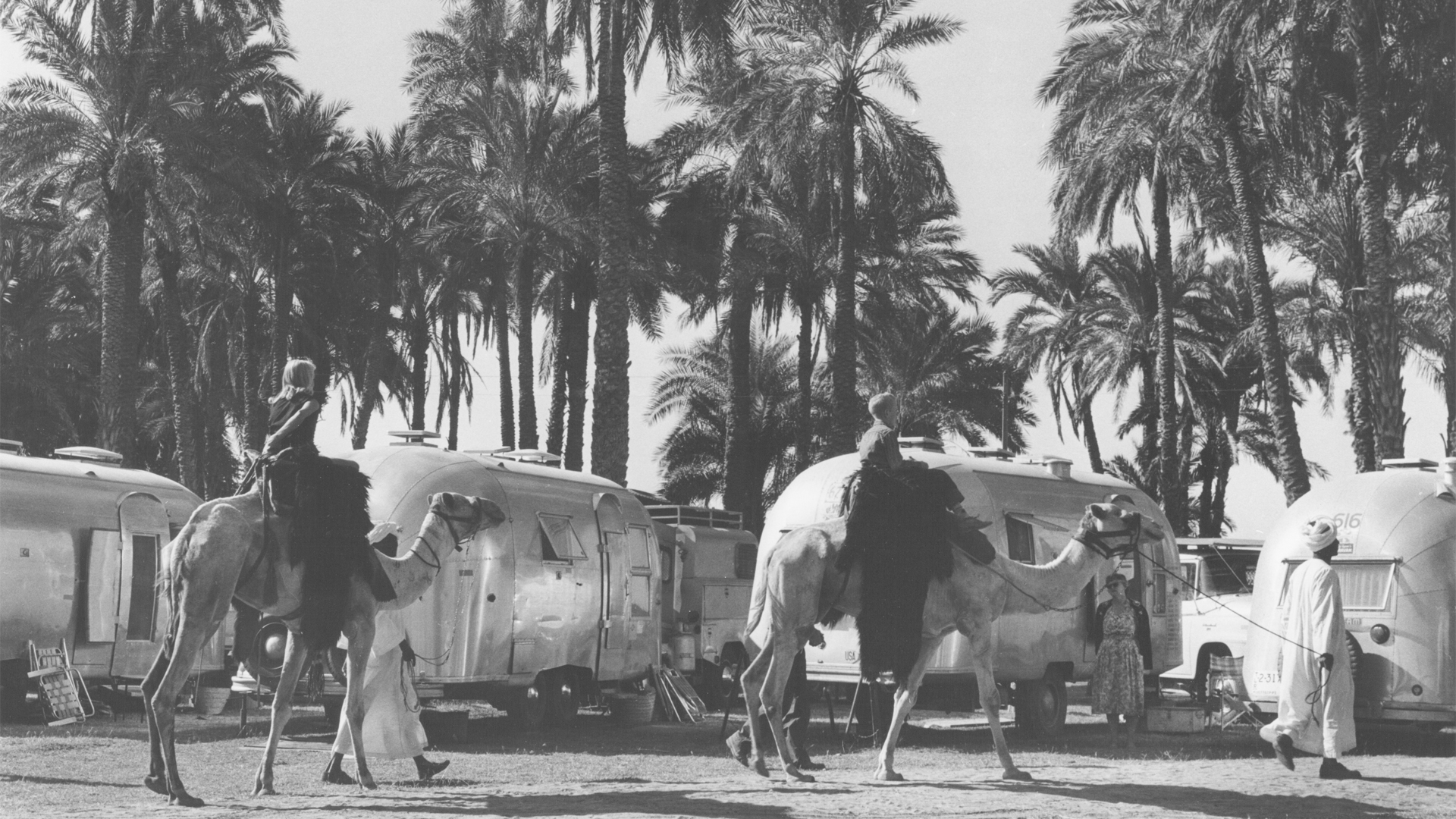 While leading Caravans through Mexico, Europe, and Africa, Wally dreamed of leading a Caravan that would circumnavigate the globe. Unfortunately, he was unable to fulfill this dream before he lost his battle with cancer in 1962. In 1963-1964, fulfilling a promise he had made to Wally, Airstream’s Chairman of the Board Andy Charles led the famous Around the World Caravan. The iconic Caravan of 105 people traveled from Singapore to Cabo Da Roca, Portugal in 403 days. Caravanners visited the Taj Mahal, swam in the Dead Sea, and even parked their Airstreams in front of the Kremlin. 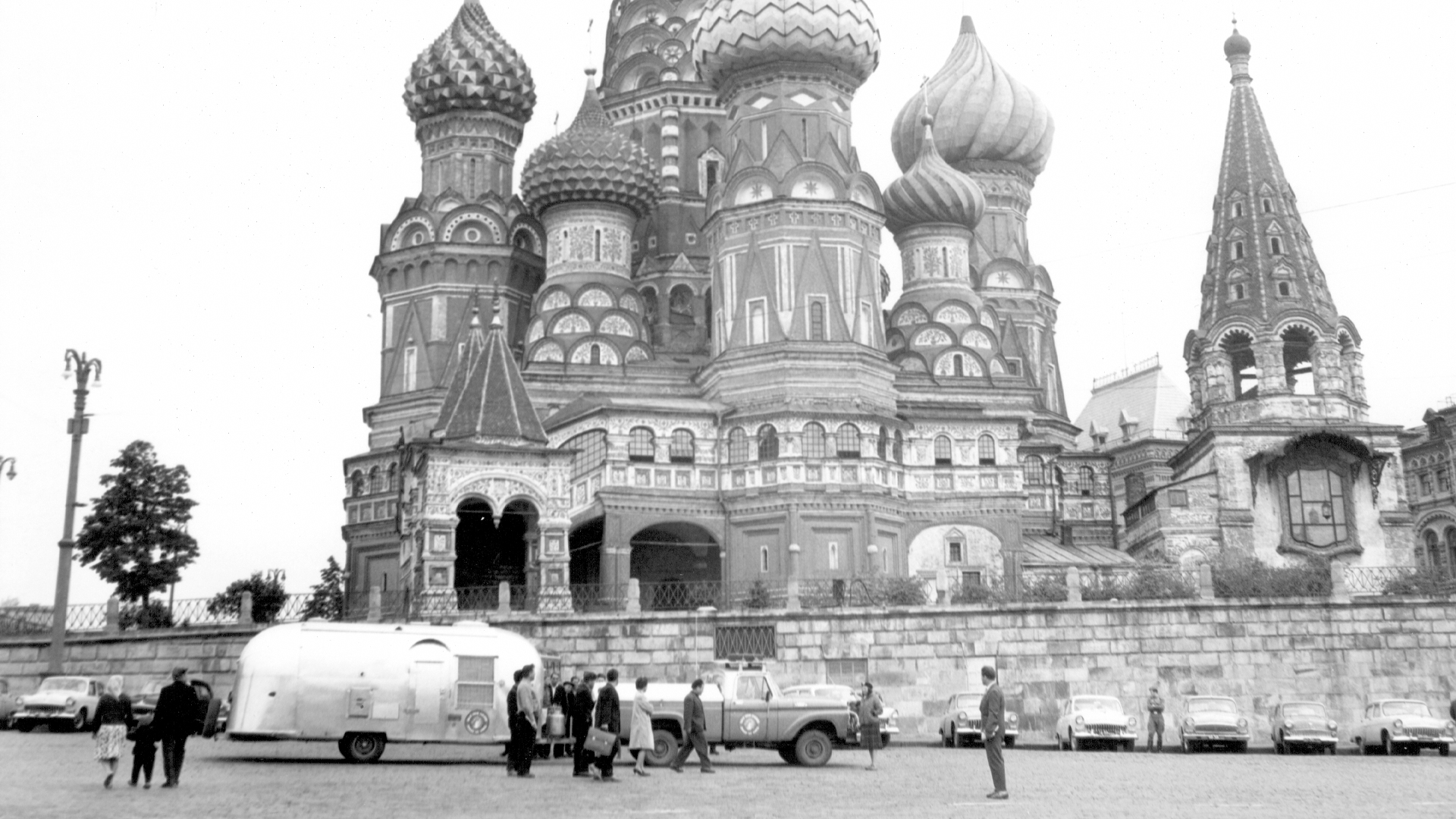 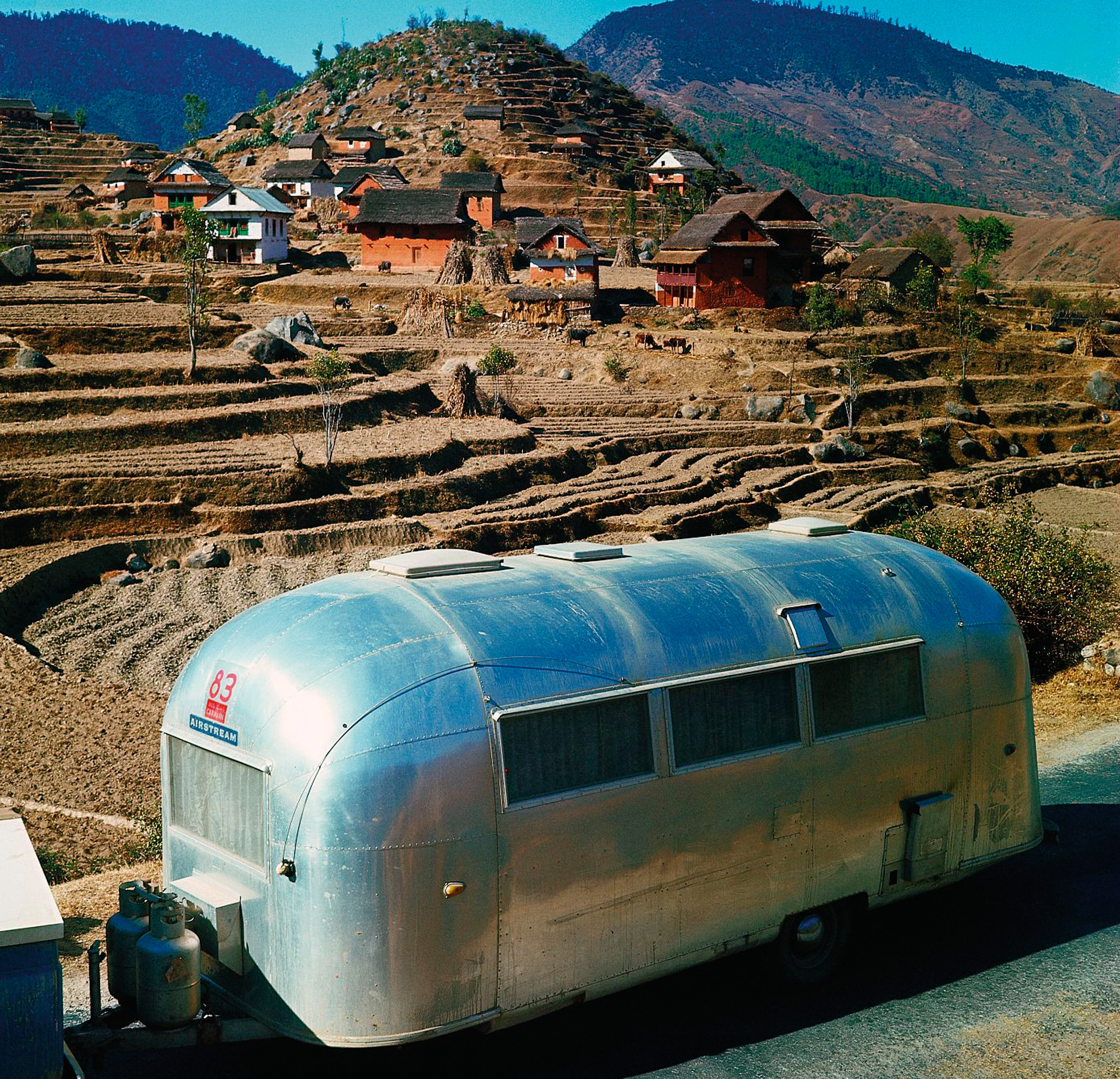 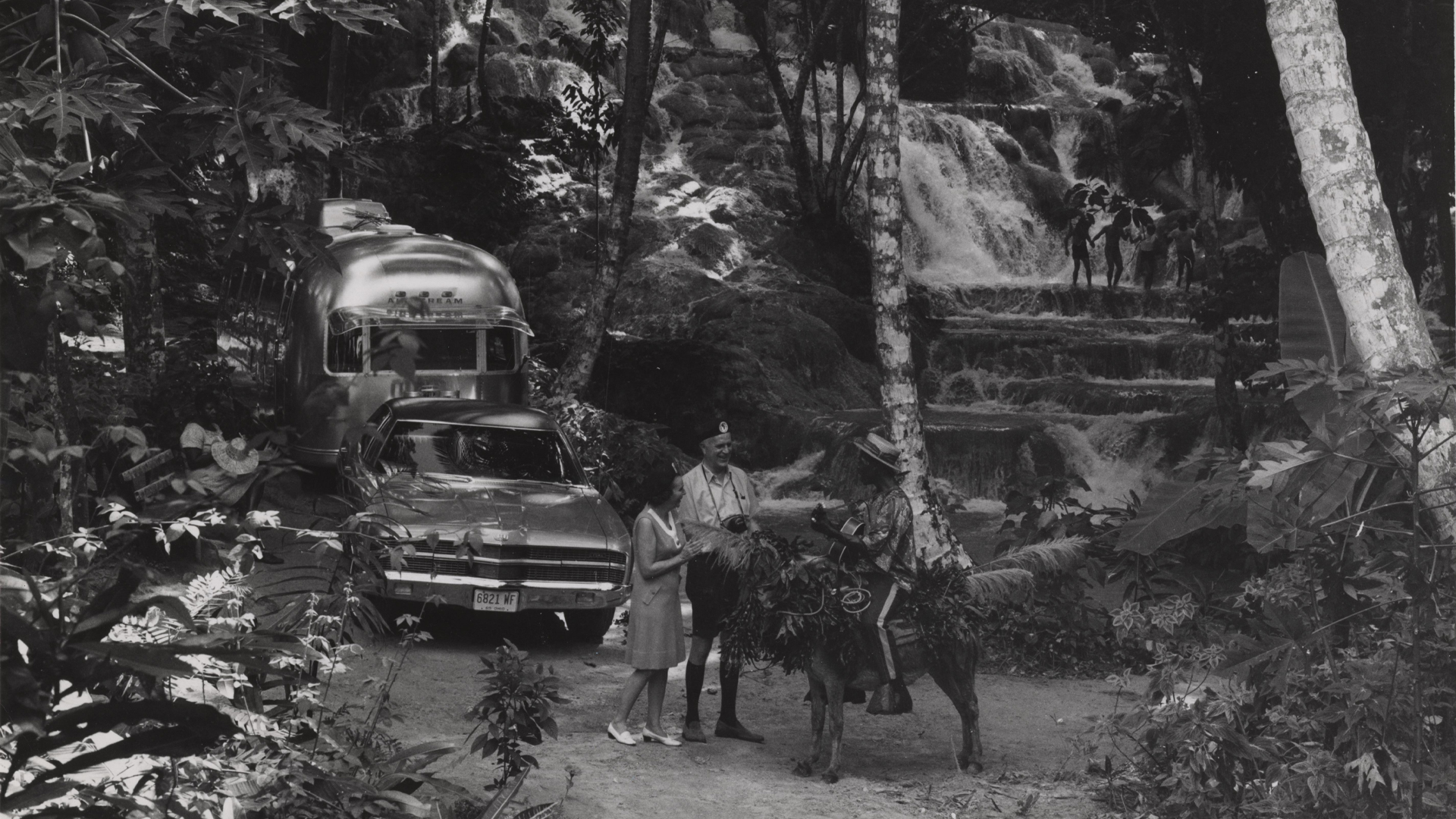 Caravan history was made once again in the 1980s thanks to a series of nine Wally Byam Caravan Club International Caravans that toured China from 1985-1988 with eleven custom 21’ Airstreams. The first WBCCI Caravan to New Zealand and Australia was also held in 1985.

The new millennium featured three notable Caravans including the Vintage Airstream Club Caravan to Belize in 2000, two 50th Anniversary Caravans to Central America and Panama in 2001, and the WBCCI Golden Anniversary Caravans in 2005 which retraced the route of the 1955 Eastern Canadian Caravan synonymous with the Club’s founding.

In his Creed, Wally promised “To lead caravans wherever the four winds blow… over twinkling boulevards, across trackless deserts… to the traveled and untraveled corners of the earth.” Over the past seven decades, Airstreamers have answered that call, chasing epic adventures and creating memories that last a lifetime.