The National Trust is on a trek across the Mother Road this summer – in an Airstream! Each week, a Route 66 Roadie will be documenting their experiences, attending meet-ups, and bringing attention to an icon of American history. Today, Roadie Nicole Capo shares her experience from week five of the #Preserve66 trip! (Photography: David Kafer)

We were greeted by hail in Kingman, Arizona, pea- and grape-sized balls of ice that loudly announced their presence on cars, on pavement, on the metal of the neon signs surrounding us. It had been thundering for an hour and I, in my room with the curtains closed, had assumed it was the sound of the trucks rolling by on the highway that passed in front of our hotel. When I opened the door, the ground was littered with icy pebbles. I watched them fall in awe as lightning flashed in the distance. It was a fitting start to what would be a week full of firsts: first hailstorm, first tumbleweed sighting, first stay at a motor court motel, first time visiting Los Angeles and first time taking a dip in the cool water of the Pacific Ocean. It would also be my first time traveling on historic Route 66, that same highway just outside my door, and a lot of those firsts would be tied directly to the iconic Route 66 experience.

Another big first? Traveling with an Airstream trailer, which harkened back to the golden days of Route 66. It helped me understand what it might be like, traveling cross-country with my family in search of new opportunities, adventure, or freedom. Everywhere we went, folks asked to take a photo, step inside, or just run their fingers along the sides of the trailer as they tried to soak up a little bit of that open road magic. You could hear the nostalgia in their voices as they talked about their prior experiences on the Route, or the longing when they told us that “one day” they would make the trip themselves.

I expected to be wooed by the famed Route 66 icons – and there’s no doubt that I was fully enchanted by the sparkle of the neon signs, the stunning vintage architecture, and the kitsch that makes this highway so great – but time and time again, it was the hidden stories that called to me, that begged me to turn one more corner and read one more plaque.

It was how, at the California Route 66 Museum in Victorville, I heard from volunteer docent Lou about growing up in Harlem at a time when there were no white people around. How he wound up in San Bernardino after serving in the Air Force, driving a bus up and down Route 66 for 20 years before he even realized what road he was driving on. How the first time he walked into that museum, he saw his entire childhood surrounding him, burst into tears, and never left.

It was how The Donut Man owner Jim Nakano told us about growing up in Boyle Heights and how, at two years old, he and his family were sent to an internment camp in Poston, Arizona. How after years of being told not to share his ethnicity, he and his wife now own an extremely successful donut shop right on Route 66, one that people from all over the world come to visit for their famed peach and strawberry donuts. Today, it’s no secret that the owner is Japanese-American.

It was how, at the Southwest Museum of the American Indian, I learned about Charles Fletcher Lummis, a white journalist in the late 1800s who became so enamored with the communities of color he met on his travels through the Southwest that he dedicated his life to advocating for them, and built a museum to display all the items he collected on his journeys. Here, I fell in love with a gorgeous painting by Quah Ah (also known as Tonita Peña), the only woman in the San Ildefonso Movement and who is widely regarded as one of the best female American Indian artists of all time. Her work and life were dedicated towards pushing against traditional female roles, particularly those in Native communities that dictated she should become a ceramicist and a mother instead of a painter and full-time artist.

I learned and saw all of this in a series of firsts, despite the fact that these stories have lived right there, on Route 66, for years before my time and will continue to live on for years after I’m gone. Despite our steady cruise down the road, the Airstream trailing behind as a constant reminder to rest and enjoy the slower living, the trip went by in what felt like the blink of an eye. If we had endless time on the road we could have easily spent months just seeking out and listening to stories as we traveled across the Route’s final stretch in California. Every person, every building, and every place has something to tell you if you’re willing to spend some time with them.

Some days we traveled the road in silence, the only hints of other people seen during our glimpses of the Interstate. Some of the places we stopped at were quiet and lonely. An early morning in Oatman made us feel like the town belonged to us – well, us and the wild burros wandering the town, demanding food and attention. But then we’d come across another site packed with folks from all over the world as they traveled the famous highway. Like at Roy’s Motel and Café, where a steady rotation of vehicles came through the iconic gas station during our short time there despite road detours around Amboy that, according to locals, had been in place for years after the bridges on either side of the town were wiped out from flooding. Or the previously mentioned Victorville museum, where other guests hurried to enter behind us despite the museum technically being closed that day. Anyone looking for a chat and a photo was welcomed everywhere we went; no one was ever turned away.

When we finally reached the Santa Monica Pier I was completely overwhelmed by the crowds of tourists who had come to snap a photo of the End of the Route sign, by the immensity of the Pacific Ocean, and by the weight of all the stories that still remained untold. I had barely captured a small slice – what other pieces had I missed along the way?

Luckily, Route 66 isn’t going anywhere, and its mysteries and treasures will remain for all those who choose to take a peek beneath the surface. If I’ve learned anything this week, it’s that I’m not the only one who wants to. 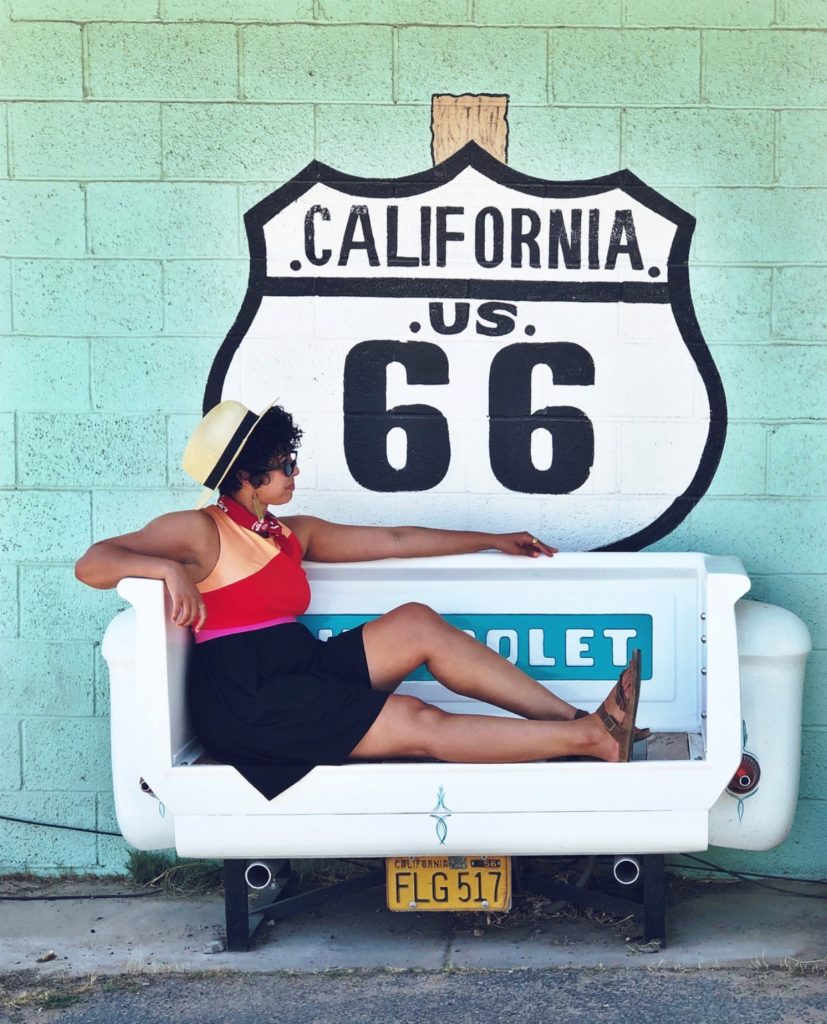